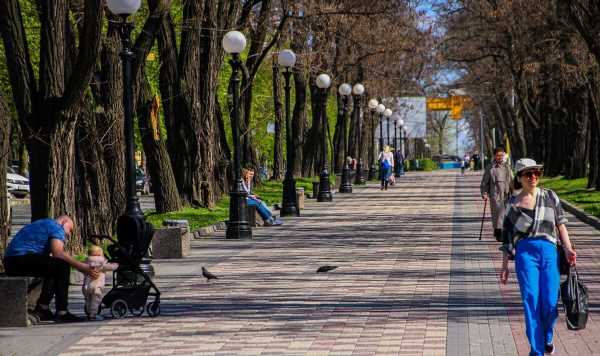 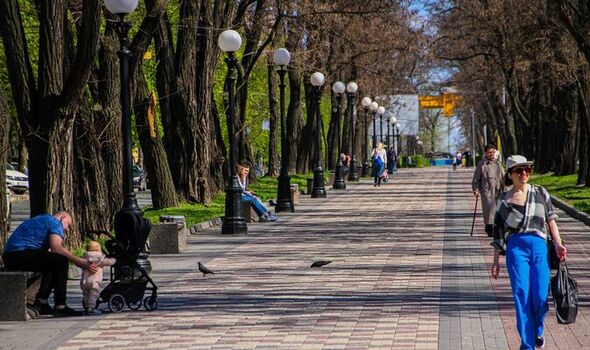 Coupled with its warm spring weather, the humanitarian support hub is almost like a holiday destination. Around 80 percent of small to medium-sized business are open, while residents socialise outdoors and public transport continues.

The atmosphere is light as if the war was taking place on another continent. But when the wail of air raid sirens cuts in, the city’s mood instantly changes.

Ten people were killed in missile strikes in recent weeks as Russia targeted residential areas, railway lines and the Amur Bridge, built in 1884.

Mayor Borys Filatov fears further attacks, saying: “The Amur Bridge, which the Russian invaders wanted to bomb, is the oldest in the Dnipro.The last time was when the Nazis bombed during the Second World War “The recent shelling is worrying.A huge number of public transport routes pass through the bridge. Dozens of civilians could have suffered.”

But he remains defiant ahead of Russia’s Victory Day today, which marks Moscow’s victory over Germany in 1945.

He added: “Russian generals will not be able to disrupt the logistics of the transfer of weapons from ourWestern allies.We know any provocations are possible and the city is preparing for them.Those who remain in the city are urged not to ignore the air raid warnings and observe the curfew rules.”

The mayor confirmed Dnipro would continue to aid those fleeing Mariupol and other besieged locations, saying: “The city has accepted 86,000 refugees and almost 20,000 are people over 60.”

Hong Kong? Bushfires? What's been happening on the biggest non-coronavirus stories of the year

Mother goes completely blind after getting a cold

Victim Accuses Ex-Ohio Teacher of Grooming Him for Sex at Age 12, Then Having His Baby