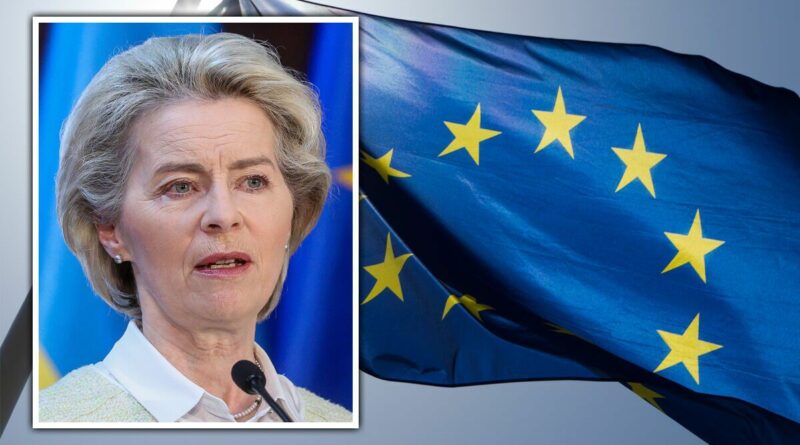 Dancers perform at the European Parliament during conference

Today marks the occasion as recognised by the European Union, which celebrates “peace and unity in Europe”. The occasion commemorates the 1950 Schuman Declaration, where French foreign minister Robert Schuman proposed placing French and West German production of coal and steel under a single authority. The declaration paved the way for the EU to be formed.

Joe Barnes claimed on Twitter staff have been encouraged to celebrate Europe Day.

He said: “Staff working at the EU Parliament, about 8,000, have been encouraged to come pick up a free EU flag to celebrate #EuropeDay, as per internal email.

“‘Hang your flag out of your window or balcony, take a picture of yourself with the flag and post it on social media,’ it says.”

On Saturday, EU institutions were opened to the public for the first time since the coronavirus pandemic in 2020.

Earlier in May, Brussels was urged to pledge to teach so-called “educational programmes” to pupils across the bloc on EU institutions.

The proposals suggested: “We recommend that the European Union allocate a specific budget to develop educational programmes on the functioning of the EU and its values.

“Then it will be proposed to the Member States that wish that they can integrate them into their school curricula (primary, secondary schools, and universities).

“In addition, a specific course on the EU and its functioning could be offered to students wishing to study in another European country through the Erasmus programme.

“Students choosing this course would be given priority in the allocation of said Erasmus programmes. We recommend this to strengthen the sense of belonging to the EU.

“This will enable citizens to better identify with the EU and transmit its values. Moreover, it will also improve transparency regarding the functioning of the EU, the benefits of being part of it, and the fight against anti European movements.

“This should act as a deterrent to Member States leaving the EU.”

The think tank predicted a further “power grab” by the EU on member states, and added in a report: “We already have precedent on what happens next from the Convention on the Future of Europe.

“This was set up in response to the Laeken Declaration by heads of government in 2001. Laeken contained an invitation to consider expanding but also removing powers from the EU.

“This however ended up as a power grab, generating an EU Constitution.

“When that was rejected in referenda, the text was slightly diluted and then pushed through as the Lisbon Treaty.

“The democratic controversy surrounding this process has been a major feature behind the pause in transferring more powers to the EU level.

“But the lesson is clear: the process leads to more powers handed over to Brussels.

“Why call it a “Conference”? The Lisbon Treaty introduced a formal process for running a new Constitutional Convention.

“Triggering one generates the intent from the outset of pursuing a major treaty change and formally brings in MEPs keen to pursue it. This process has been ducked as it would have removed power from national governments in controlling the end agenda.”

It comes after French President Emmanuel Macron hinted a new “European Community” could be formed to allow third countries like the UK to join political discussions on foreign policies.

Speaking at a European Union event in Strasbourg on Monday, Mr Macron said he was in favour of a new type of “political European community” that would allow countries outside of the European Union to join “European core values”.

Poland, Germany and the Netherlands were drawing proposals to allow Brexit Britain “back into the fold” of European foreign discussions.

Speaking to The Telegraph a senior EU official said: “Continental leaders need to say we’re sitting down, and it would be great if you sat down with us.”

Brexit Project Fear unmasked: Did ANY of these five Remainer claims come true?