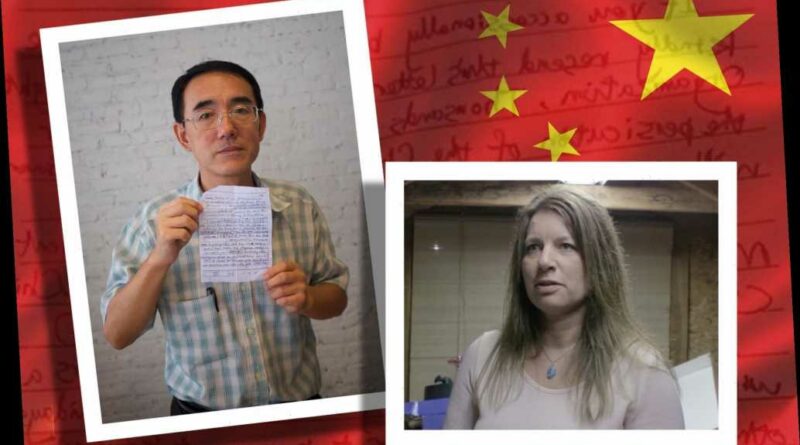 BBC banned in China after explosive report on Uighur rape

In 2012, Oregon mother Julie Keith opened a package of Halloween decorations from her local Kmart. Inside, she found something far more unsettling than a bunch of plastic skeletons and gravestones: an SOS letter from the prisoner who made them.

Written neatly in a blue pen, it read:

Please kindly resend this letter to the World Human Right[s] Organization. Thousands [of] people here who are under the persecution of the Chinese Communist Party Government will thank and remember you forever.

“Is this a prank?” she thought.

The 42-year-old read on as the note detailed inhumane work conditions and the fact that many workers were imprisoned despite having committed no crimes. She Googled the name of the labor camp mentioned in the note: Masanjia. It was real. She tried contacting various human rights organizations and finally went to the Oregonian newspaper, which published a story about the SOS.

“Made in China: A Prisoner, an SOS Letter and the Hidden Cost of America’s Cheap Goods” (Algonquin Books), out now, tells the story of the note and its author, religious dissident Sun Yi, who spent 2.5 years at Masanjia Labor Camp in China.

“This SOS letter that Sun Yi wrote was not actually the first letter [from a labor camp] that ever arrived in the US,” the book’s author, Amelia Pang, told The Post. “But it was perhaps one of the more eye-catching.”

Sun was a mild-mannered engineer living in Beijing with his wife when he was sent to Masanjia in April 2008. He had been arrested at least 12 times before that — for practicing a meditation-based philosophy called Falun Gong — but had always managed to be released through hunger strikes. This time, he had been caught during a raid of an underground printing press that published critiques of the Communist Party.

At Masanjia, the slight 41-year-old worked 15-hour-plus shifts making holiday decorations for the brand Totally Ghoul. Guards tortured him continually over his last year there — prying his mouth open with a ball gag, force-feeding him with a tube, strapping his wrists to the top of a bunk bed and letting him dangle there for days until he renounced Falun Gong. He never did.

“He was so hardcore,” said Pang, who interviewed Sun several times via Skype after his release. “He cared so much about freedom in China, he sacrificed so much to what many would say was a futile cause.”

That activist streak — mixed with desperation — led to Sun writing his first SOS letter. In late 2008, with more than a year left to his 2.5-year sentence, he noticed that some of the shipping boxes had English-language labels and wondered if they were headed to America or the UK. Sun had studied English in school, and though his grammar wasn’t perfect, he remembered a lot of vocabulary. Perhaps if he dropped a message into a box, someone overseas would receive it.

He tore pages out of the “political reeducation” workbook he had received from the prison and, when everyone was asleep, began drafting his letter very slowly and quietly. It took him two nights to finish the first letter, but after two weeks he had 20, which he hid between the bars of his bed. One evening, when he was packaging gravestones alone, he inserted his letters among the goods.

The next day, as he watched the boxes being whisked away, he felt a wave of relief. He wanted to do it again; he even enlisted a few of his fellow prisoners to help distribute the notes. They did so for a few months until the prison found a sample in another prisoner’s mattress, rounded up all the Falun Gong practitioners and began the torture.

China has, according to Pang’s book, at least 1,000 “re-education” or “detox” camps providing forced labor to manufacturers churning out cheap products for sale everywhere from Walmart to Saks Fifth Avenue. The independent Australian Strategic Policy Institute found that between 2017 and 2019 more than 83 brands, including Nike, Apple and BMW, were sourced from Chinese factories where workers — mainly Muslim Uyghurs — were held against their will.

Penal labor isn’t unique to China; the US, controversially, allows it under the 13th Amendment, which forbids slavery or involuntary servitude, “except as punishment for crime whereof party shall have been duly convicted.” Yet China’s gulags include not just convicted criminals, but also political dissidents, ethnic minorities and people who practice forbidden religions (like Sun) often imprisoned without trial or representation.

Prisoners work between 15 to 24 hours a day, and may endure torture if they do not meet quotas. Some camps “brainwash” their charges. Evidence suggests that some may supply organs for China’s $1 billion transplant industry.

“When I went to China to follow trucks from these labor camps to see what manufacturers they went to, one went to an Apple factory,” Pang said. Still, she added, “you need a lot of hard evidence at one particular camp. Because there are no witnesses who made it to the US who can safely talk about it,” US authorities “can’t do anything.”

After the Totally Ghoul SOS made headlines in 2012, Sears Holding — which owns Kmart — said they found “no evidence that production was subcontracted to a labor camp during a recent audit of the factory that produced the Halloween decoration.”

Yet, Pang said, “no evidence” often just means that the production records no longer exist. “Their Global Compliance Program only requires suppliers to maintain time card and payroll records for ‘at least one year,’ ” she explained. “Julie’s Halloween decorations sat in her shed for two years before she opened them. When I asked Sears Holdings if its auditors were able to access records from the relevant years during its investigation into the note Julie found, the spokesperson told me the company had ‘no further comment.’ ”

At the end of 2009, Sun’s sister Jing — who had tried to visit Sun several times, to no avail — received a call from a man who had recently been released from Masanjia.

“Sun is in trouble,” he told her. “You have to save him. He is about to be tortured to death.”

Jing enlisted the help of a prominent human-rights lawyer, Jiang Tianyong, who went with her to the prison in March 2010, saying it was illegal to prohibit visitation. Soon, they were visiting Sun regularly — he would be released from his chains and be given food for a few days beforehand so he wouldn’t look so haggard — and during their visits, Jiang would document the various tortures Sun described. The authorities held Sun 20 days over his 2.5-year sentence, since he never disavowed his faith, but they feared detaining him any longer would cause legal trouble. He was released that September.

Yet, returning to normal life wasn’t easy for a known dissident. Sun could not get work as an engineer, so he crashed at a friend’s house in Beijing before reconnecting with his ex-wife, May, who was still in love with Sun and invited him back into her life, despite the risks.

He continued his dissident activities, distributing Falun Gong literature, attending demonstrations and using his tech background to teach others how to use encrypted software and circumvent China’s Great Firewall to surf the uncensored Web.

That’s how, one day in December 2012, he came across the headline, “Chinese SOS Letter Discovered in Oregon.”

It was his letter.

“I achieved my purpose. All I wanted was for people to know,” he said later. “But I was afraid to believe it.”

Seeing the article galvanized him. He began doing interviews with various American outlets — using a pseudonym — about his time at the camps. He connected with a Canadian-Chinese filmmaker named Leon Lee, offering to film documentary footage of himself for a movie about his experience. (It was released in 2018 with the name “Letter from Masanjia.”)

And he wrote a letter to Julie Keith, thanking her for sharing his letter with the world and giving her his e-mail.

At the same time, staying in China was becoming increasingly dangerous. In November 2016, Sun was arrested while attending a trial of a fellow Falun Gong practitioner. Shortly after his arrest, his blood pressure spiked, and three days later the prison released him so he could go to the hospital. Yet the police had confiscated his phones and Sun knew it was a matter of time before authorities would hack into his encrypted correspondence with Lee. So he said a tearful goodbye to May, who didn’t want to leave her ill father in China, and boarded a flight to Indonesia, the one place that didn’t require passports for visitors from China.

During this time, he struck up an e-mail correspondence with Julie Keith. Once he landed in Jakarta, Indonesia, he invited her to visit him. In March 2017, she flew to the Jakarta airport, where a car brought her and a cameraman (who was shooting the Masanjia documentary) to a decrepit building in the northern part of the city. Outside stood a small, frail man with wiry glasses and a kind expression: Sun. “You come here so long distance,” he said in English as he embraced her. He took her inside to his tiny apartment and showed her around.

The next few days the pair wandered the city, sharing stories and photos of family members.

“I had some people tell me the people in Masanjia would be punished because I published the letter,” she told him. “They told me that I should not have done that. I was always concerned that I had put you in danger.”

“I thank you forever,” Sun told her.

That October, eight days shy of his 51st birthday, Sun died from a lung infection and acute kidney failure. Since his death was so sudden and he didn’t have kidney problems before, some of his friends speculated that the Chinese government was involved. But since his body was cremated without an autopsy, that was impossible to prove.

His ashes were brought to his hometown of Xi’an, where they rest alongside his mother’s and father’s remains.

“I so badly wanted a happy ending for him,” Keith told the BBC in 2018. “He was the most resilient, strong person I have ever met. For someone to go through what he did and come out and be able to talk about it and share his experiences with the world — it’s just incredible.”

Three years after Sun’s death, China’s mass incarceration of its Uyghur population has sparked enough outrage that last September, the US House of Representatives passed the Uyghur Forced Labor Prevention Act, which would ban all products from Xinjiang, the region where these camps operate. It has since stalled in the Senate, but Pang said she’s “hopeful that

In the meantime, ordinary US citizens can make a difference, too.

“The next time you go shopping online, anywhere, take a moment to look at either the sustainability page or the Corporate Social Responsibility page,” Pang said.

“And if they don’t have information on what kind of audits they’re performing at their factories, go on Twitter and go on Facebook and ask if they can prove with more transparency that they are doing everything they can to discourage their factories from subcontracting forced laborers. If there’s just enough people tweeting them and tagging them on Facebook and social media, then they will be forced to respond and reckon with that.”

In the end, consumers have a lot more sway on corporate America than they realize.

“We actually hold a lot of power to influence how businesses source from China,” Pang added. “I hope this book helps them do that.”

Girl, two, becomes one of youngest in Britain to have ovary removed 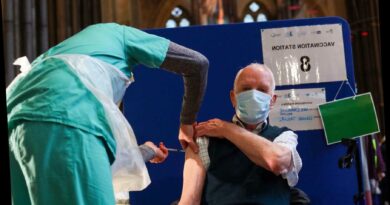