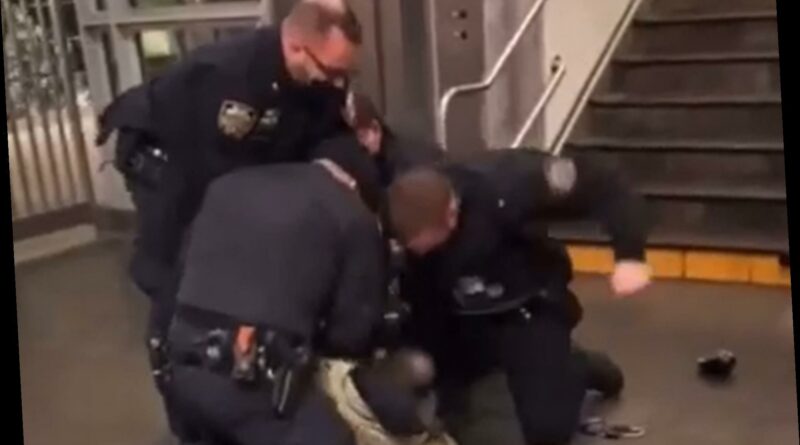 A new video shows NYPD cops pummel a suspect accused of spitting on and head-butting police officers at a Lower Manhattan subway station.

The video from the South Ferry subway station on Tuesday shows three officers trying to restrain a 50-year-old suspect in an attack on two cops at the station, sources said.

A fourth officer is seen repeatedly punching the suspect in the face while the other cops try to handcuff the man — who is eventually handcuffed and led away, the video shows.

The NYPD did not respond to requests for comment on the video, which was obtained by The Post on Thursday.

According to police, the suspect, identified by sources as Alex Lowery, was smoking in the station when police approached him — and he lashed out at the cops spitting on one, and headbutting the other before they all went tumbling down the stairs.

Lowery previously spent time in state prison on a 2017 weapons charge for allegedly holding a knife to a woman’s throat at a Manhattan train station.

Police said he was charged with two counts of assaulting a police officer, resisting arrest, disorderly conduct, and cited for smoking.

“After a week of outcry over the chaos in the subway, these cops were doing exactly what was asked of them: enforcing the transit system rules.,” the president of the city’s largest police union said. “For their efforts, they were spat on, attacked, thrown down a flight of stairs, and one police officer nearly had his ear ripped off. None of that assault was shown in the partial video circulating online, because the pro-criminal crowd doesn’t want you to know how truly dangerous the subways have become – even for police officers.”