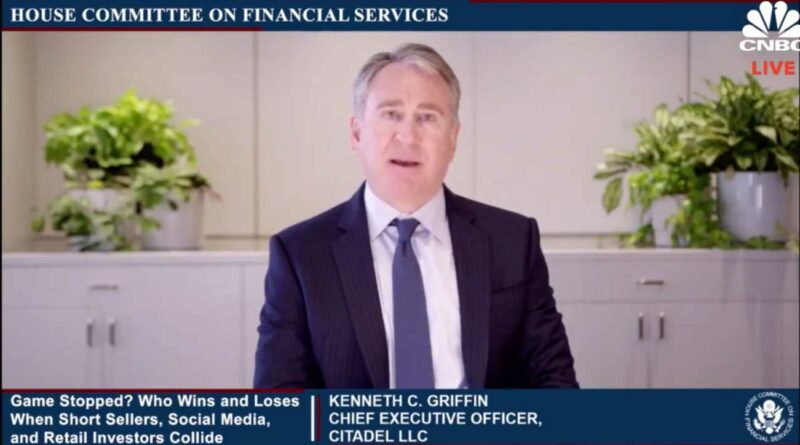 During Thursday's GameStop hearing, Citadel Securities' Ken Griffin defended a controversial method brokerages use to make money, and said his firm would adapt if new regulations prohibited the practice.

Lawmakers finally got a chance to press Robinhood, Citadel and Reddit chiefs about the GameStop trading controversy.

Members of Congress spent much of their time prodding about "payment for order flow," a practice in which a brokerage receives payment from a market maker, known as a dealer, for directing the order to them.

This model is how Robinhood and other brokers are able to have commission-free trading.

Robinhood made more than $221 million from payment for order flow in the fourth quarter of 2020. Meanwhile, Citadel Securities is a market maker.

"We simply play by the rules of the road," said Griffin. "Payment for order flow had been expressly approved by the SEC, it is a customary practice within the industry," he said, referring to the Securities and Exchange Commission. "If they choose to change the rules of the road, we need to drive on the left side versus the right side, that's fine with us."

"I do believe that payment for order flow has been an important source of innovation in the industry. As the CEO of Robinhood has testified, they drove the industry toward zero-dollar commissions. This has been a big win for American investors," Griffin added.

Griffin was pressed by Rep. Brad Sherman, D-Calif., about the "best execution" practice of the market maker.

Griffin said "the quality of execution varies by the channel of the order" and "size of the order is only one factor."

The Citadel chief started to say that because the Robinhood order comes from a community of individual traders who tend to transact in smaller dollar amounts, that could affect the execution. However, he was interrupted by an agitated Sherman.

"Our system routes orders based on who provides the best execution and quality for our customers. The reason Citadel gets a relatively high percentage of our customer order flow is because they provide superior execution quality," said Tenev.

A change to the payment for order flow legality would pose a major risk to the pioneer of free trading.

"Payment for order flow enables commission-free trading," Tenev added. "When we started people didn't think there was enough margin to make this business work, but we've been fortunate to make it work and make it work for our customers.

Representatives repeatedly asked Tenev if the millennial stock trading app restricted trading for any other reason than to meet depository requirements.

Tenev cited increased capital requirements from the Depository Trust and Clearing Corp., an entity responsible for settling and clearing trades, for the trading restrictions. Robinhood raised more than $3.4 billion in a few days to shore up its balance sheet and drop some of the restrictions.

"That additional capital…was entirely to prepare for a future, even greater, black swan event and to unrestrict on the trading and buying of these securities," said Tenev. "The $3.4 billion we raised I think goes a long way in cushioning the firm for future market volatility and other similar black swan events."

He told the representatives that the GameStop mania was a one in 3.5 million event, which he said was "unmodelable." Tenev said Robinhood's risk management processes kicked in as they were designed.

The Robinhood chief was pressed about why the trading app restricted on the buy side of GameStop last month.

"Buying securities increases our collateral requirements, selling does not," said Tenev. "Moreover, preventing customers from selling is a very difficult and painful experience where customers are unable to access their money…I imagine it would have been significantly worse if we had prevented customers from selling."

Tenev said the majority of Robinhood clients are engaged in buy and hold investing strategies with only about 13% trading in the options market and only about 3% trading on margin.

"We're also a self-directed brokerage, so that means we don't provide advice and we don't make recommendations for what customers should or should not invest in," said Tenev.

The total value of Robinhood's customers' assets exceeds the net amount of money its clients have deposited into Robinhood by over $35 billion, he added.

Tenev also advocated for real-time settlement instead of two-day settlement in order to help combat some of the chaos that occurred during the GameStop saga.

Chobani looks to shepherd its yogurt to an IPO

Bank of Japan Refuses Trader Requests to Work From Home