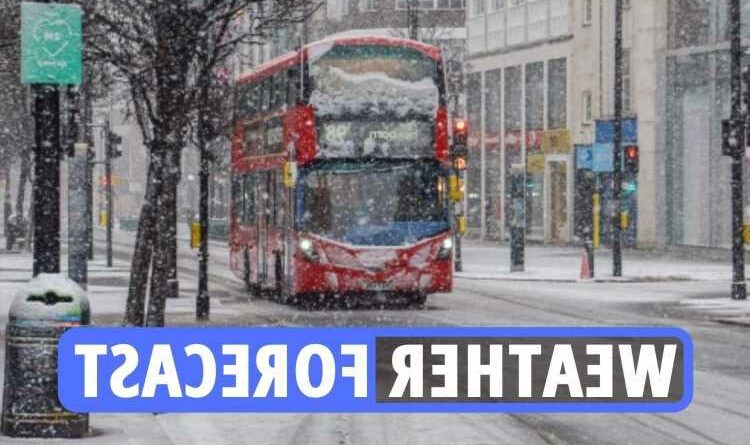 SNOW will batter the UK over the coming days as an Arctic Blast sends temperatures plunging as low as -7C.

Up to 20 inches of snow are predicted to fall in Scotland starting from Sunday, with the icy weather moving further down the country over the following days.

By Tuesday London and the rest of southern England will see snow meaning the entire UK should have experienced some snow by the middle of next week.

The Met Office has said shots of Arctic air will hit our shores this week – "meaning much colder and wetter weather".

The weather agency tweeted: "Are you noticing the change in temperature? Several shots of Arctic air are on the way to the UK later this week as the jet stream dips southwards bringing much #colder and wetter weather.

Read our weather live blog for the latest forecasts and updates…

The Mountain Weather Information Service has warned of hurricane force winds of 100 to 120mph on Friday in the Cairngorms and south eastern Highlands.

"Massive snowfall" for the region overnight Friday and into Saturday as well as the risk of wind-blown snow causing whiteout conditions, the service predicts.

The Scottish Environment Protection Agency said coastal areas were expected to see the worst of the windy weather.

It said: "High winds from Storm Arwen could bring a risk from spray and debris in coastal areas until Saturday.

"At this time we are not expecting widespread coastal flooding but please remain vigilant if you're near the coast."

Snow has also been forecast for some of Scotland's hills and mountains.

Mountaineering Scotland, an organisation representing hillwalkers, skiers and climbers, said it looked like "a good weekend for festive shopping or get cosy indoors".

Lots of England remains sunny and bright but chilly this afternoon.

An employee of the Lake District National Park snapped this stunning image of the rolling hills with clear views stretching for miles.

The high pressure remains until tomorrow when Storm Arwen is set to wreak havoc.

Tomorrow, the Lake District is forecast a cloudy morning with outbreaks of occasionally heavy rain and, above about 600m, snow, the snow becoming confined to the highest fells through the early hours.

The rain, and summit snow, clears towards late morning to leave a bright afternoon with sunny spells and a few wintry showers. The showers are expected to become more frequent through the evening.

Why do storms have names?

The Met Office decided to start giving storms names back in 2014, in the same way they do in America.

The first windstorm to be named was Abigail on 10 November 2015 and since they've been asking the public to suggest names.

Past storms included Storm Francis, Storm Dennis, and Storm Ophelia – and if you're wondering whether it's just that the public have an eclectic taste for names, the Met Office purposely pick names less common, so as to reduce any bad association with the storm.

They hoped that naming big storms will make people more aware of them and how dangerous they can be.

The UK storms will take it in turns to be girls' or boys' names but strangely, research shows that hurricanes with female names are more likely to hurt more people than those with males names.

Chris Watts Is Corresponding with Women from His Prison Cell: Source