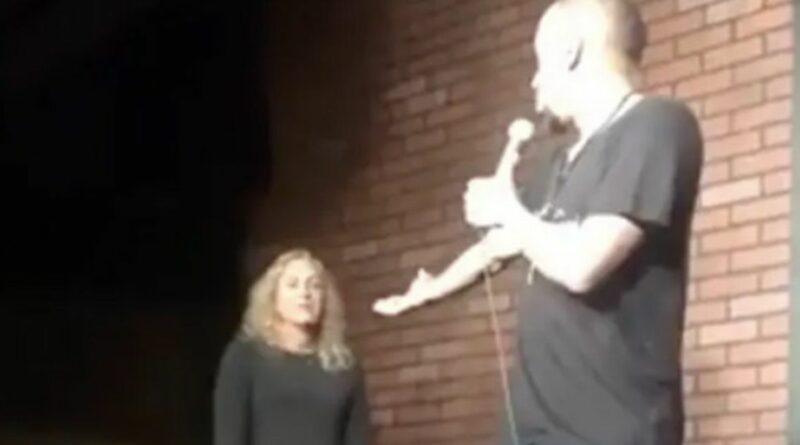 A woman was booed off stage after she interrupted a comedian’s set because she was offended by his jokes.

The footage shows the blonde-haired heckler confronting comedian Affion Crockett in the US.

She says: "I'm a woman. And I'm married to a man. But you've insulted a lot of people tonight."

Confused, the 47-year-old comedian asks how he is insulting people “by talking about sexual matters between adults”.

It soon becomes clear the audience is not siding with the woman as he is given a round of applause.

"I'm talking about consenting adults here," he says. "I have sex. I have sex with women.

"So me being up here describing my life is insulting to you?"

The woman says something inaudible before Affion asks the crowd if anyone is insulted.

He is met with a resounding: “No.”

She is then ushered off the stage to boos before the comedian says: “Bye Karen.”

He adds: "See white people can do whatever the f*** they want – storm the Capitol or storm my goddamn stage." Affion, from North Carolina, US, had his breakout in HBO’s Def Comedy Jam in 1997.

He has since appeared in numerous films alongside the likes of Kevin Hart and Samuel L. Jackson.

While heckling at comedy gigs is pretty common, it can often go too far.

Last month, Jimmy Carr told security to get one heckler “out of the f***ing building”.

Audience members later revealed that the unruly guest had been rude and disruptive and had kept interrupting the show.

Earlier this year, comedian Alex Williamson was punched in the head during a live gig after he chose to pour beer on a n audience member who was heckling him.

Keep up to date with all the latest news by signing up to one of Daily Star’s free newsletters here.