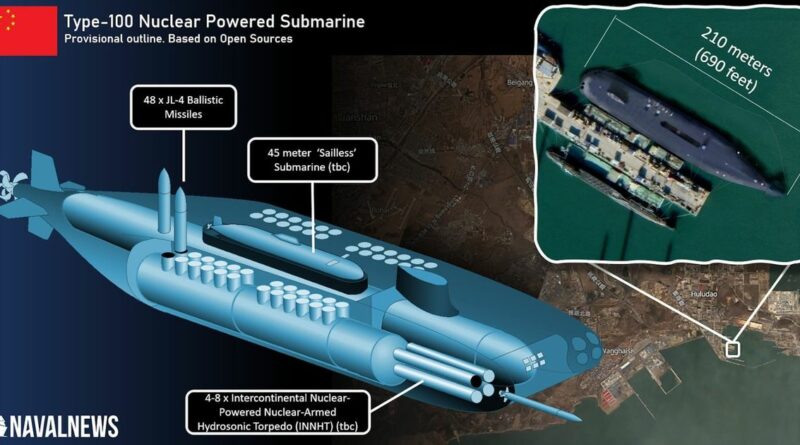 China alarmed the world this week by announcing it had developed an enormous new submarine capable of carrying huge nuclear weapons.

But after fears of imminent war were well and truly stoked, it was revealed to all be an April Fool's Day prank.

The report went on to describe China's latest sea technology, the Type-100 Class, as the "new god of submarines".

Measuring 210m by 30m and "the most heavily armed in the world", the submarine was said to have been launched from the Bohai Shipyard in Huludao that same day.

"It can also carry ginormous nuclear-powered nuclear-armed autonomous torpedoes. And a hangar on its back indicates a smaller submarine will also be supported."

The vessel's bow would carry "at least eight intercontinental nuclear-powered nuclear-armed hydrosonic torpedoes" which have an "effectively unlimited range and will be very hard to counter with current weapons".

These torpedoes are similar to the Russian Navy's Poseidon weapon, which the article said indicated some kind of "technology transfer" between the two nations.

"The shift to a massive submarine may hint, like Typhoon, at an Arctic role," it said.

"China regards itself as a Near-Arctic country and may intend to use the ice cap to protect its at-sea nuclear deterrence."

The report said the Type-100 features an open hangar the size of a known "sailless" submarine, and suggested this design would be used for "layered self-defence".

"Another possibility is that it is is for severing undersea internet cables in times of war. It has been suggested that this tactic could be used to bring about the immediate collapse of Western economies."

The report claimed the Type-100 would be the centrepiece of a massive military parade in Beijing to celebrate the 100th anniversary of the CCP in July.

"More than anything, this previously unreported submarine is a sign of the changing times. April 1st 2021 will go down in history as the start of a new era in submarines."

The report was comprehensively debunked by Chinese tabloid Global Times, and Naval News has since added an update at the bottom of the webpage clarifying the submarine is not real.

Despite the article's outlandish claims (and its publication date), the news seemed to fool a number of defence experts including Abhijit Iyer-Mitra, a senior fellow at the Institute of Peace and Conflict Studies.

He retweeted the article with what appeared to be a sincere caption that China was "making the same mistakes as the USSR".

Plenty of other Twitter users fell for the prank as well, some admitting the stunt "got them" while others hastily deleted their posts about the fake story.

A Chinese military insider told the South China Morning Post that there is "still a way to go" before the nation will be capable of developing such submarines.