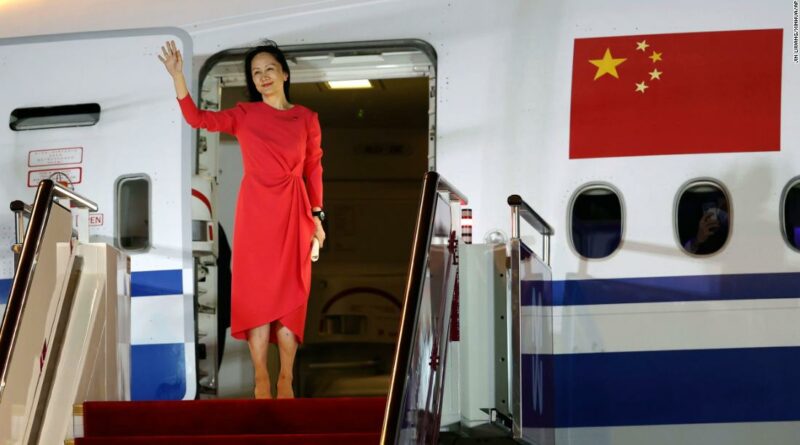 Hong Kong (CNN Business)Huawei executive Meng Wanzhou, who spent nearly three years in house arrest in Canada, returned home late Saturday, ending a prolonged extradition fight with the United States and sparking an outburst of national pride in China, where her release has been portrayed as a diplomatic victory for Beijing.

Meng, who was wanted by US federal prosecutors for fraud charges related to alleged Iran sanction violations, was arrested in Vancouver in December 2018. Beijing has called it a political arrest by the former Trump administration, and repeatedly demanded she be released.
Her legal battle strained relations between China, the United States and Canada, especially after Beijing detained two Canadians following Meng’s arrest — a move widely interpreted as political retaliation.

On Friday, Meng was allowed to go home after reaching an agreement with the US Department of Justice to defer her prosecution until late 2022, after which point her charges could be dropped. Hours after her release, the two Canadians detained by China, Michael Kovrig and Michael Spavor, were also freed.

On Saturday evening, the southern Chinese city of Shenzhen, where the tech giant Huawei is headquartered, rolled out a red carpet welcome for Meng, who arrived on a flight chartered by the Chinese government.

Wearing a red dress, Meng emerged from the plane without a face mask and waved to a crowd of more than 100 people waving Chinese flags and shouting “welcome home.”
“I’m finally back home!” Meng said in a brief speech to those assembled on the tarmac, expressing gratitude to her “great motherland,” the ruling Communist Party and, specifically, Chinese President Xi Jinping. 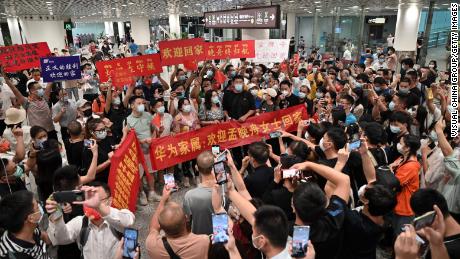 “As an ordinary Chinese citizen who had suffered this plight and been stranded abroad for three years, there was never a moment where I did not feel the care and warmth of the Party, the motherland and the people,” said Meng, who is the daughter of Huawei’s founder, Ren Zhengfei.
“Chairman Xi cares about the safety of every Chinese citizen, and he also keeps my situation on his mind. I am deeply moved.”
Meng ended her speech vowing to uphold the leadership of Xi and the party, and pledging loyalty to her country.
“Where there is a Chinese flag, there is a beacon of faith,” she said emotionally. “If faith has a color, it must be China red.”
While Meng had repeatedly called herself an “ordinary Chinese” in the speech, the grand reception for her was anything but ordinary.
As her plane descended toward the airport, it was greeted by a special message from the control tower: “Here is China’s Shenzhen Baoan Airport. The motherland is forever your most powerful support. Welcome back, Ms. Meng Wanzhou!”
Inside the arrival hall, hundreds of people gathered to welcome Meng. Holding national flags, flowers and banners, the crowd erupted in national pride, shouting slogans including “long live the motherland” and belting out patriotic songs.
Downtown, Shenzhen’s tallest skyscrapers lit up with the message: “Welcome home Meng Wanzhou!” 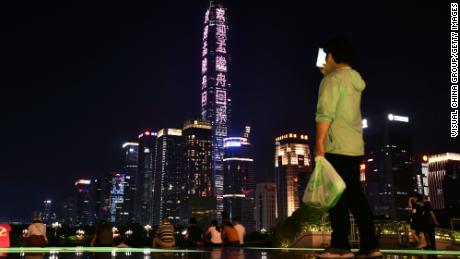 And on China’s internet, news about Meng’s journey home riveted public attention and dominated discussions. Internet users tracked her flight across the Arctic Ocean, and tens of millions of people tuned in to watch state media’s online livestream of her arrival (some ran on for six hours straight.)
Many called her a national hero, and hailed her return as a symbol of China’s victory over the West.
“The reason why (Meng’s return) has drawn so much attention is that this is a diplomatic coup for China, and a manifestation of China’s strength,” said one of the top comments on Weibo, China’s Twitter-like platform.
In a commentary, Communist Party mouthpiece People’s Daily described Meng’s homecoming as “a major victory of the Chinese people.”
The commentary called Meng’s case an act of “political persecution” by the US to “crack down on China’s high-tech enterprises” and disrupt the country’s progress.
“China does not stir up trouble, but it is also not afraid of trouble,” it said. “Not a single force can shake the status of our great motherland. Not a single force can stop the advancing steps of China!”
The US case against Meng centered on whether she had misled banking giant HSBC about Huawei’s relationship with an Iranian subsidiary, Skycom, which the US alleges could have put the bank at risk of sanctions violations.
State media reports highlighted that Meng pleaded not guilty, but left out her admission to the court that she had misrepresented Huawei’s relationship with Skycom to HSBC.
“In entering into the deferred prosecution agreement, Meng has taken responsibility for her principal role in perpetrating a scheme to defraud a global financial institution,” acting US Attorney Nicole Boeckmann said in a statement Friday — which went largely unreported by Chinese state media.
Also conspicuously absent was any mention of the release of the two Canadians, Kovrig and Spavor. Some social media posts about their fate were also censored in China.
The two Michaels landed in Calgary, Alberta, before 6 a.m. Saturday local time, a couple of hours before Meng touched down in Shenzhen. They were welcomed on the tarmac by Canadian Prime Minister Justin Trudeau.

Welcome home, Michael Kovrig and Michael Spavor. You’ve shown incredible strength, resilience, and perseverance. Know that Canadians across the country will continue to be here for you, just as they have been. pic.twitter.com/1UoLbBFGNv

“You’ve shown incredible strength, resilience, and perseverance,” Trudeau said in a Twitter post. “Know that Canadians across the country will continue to be here for you, just as they have been.”
Spavor, an entrepreneur with business ties to North Korea, and Kovrig, a former Canadian diplomat, were detained in China in December 2018, nine days after Meng was arrested while changing planes in Vancouver.

Beijing has repeatedly denied taking the two Canadians as political hostages, but observers and legal experts outside of China say the timing of their legal proceedings suggested otherwise.
Their hearings — held separately behind closed doors in March — were announced the day before the first high-level meeting between US and Chinese officials since Joe Biden came to office. And in August, just as Meng’s extradition hearings entered their final stages in Vancouver, Spavor was sentenced to 11 years in prison for spying and illegally providing state secrets overseas. In the end, even their releases were timed just hours apart.
Source: Read Full Article

What went wrong at Deutsche Bank?