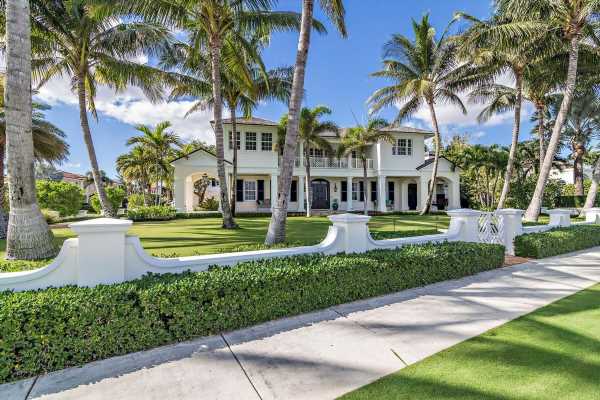 Just weeks after lawyer Amy Bahl and her husband sold their Palm Beach home for $7.3 million, it was back on the market in December for $8.2 million.

Meanwhile, the Bahls and their three kids moved to a house they purchased across the Intracoastal Waterway in West Palm Beach while they build a new place on a waterfront lot in North Palm Beach.

“We’d been talking about it for two to three years, but this market encouraged us to go ahead and list it,” Bahl said.

So goes the Palm Beach real estate market 10 months into a pandemic.

While New York’s suburbs, the Hamptons and Aspen all saw sales and prices rise last year, the activity in Florida’s Palm Beach County, from Boca Raton to Jupiter, has been at a breakneck pace. The exclusive town of Palm Beach, a sliver of an island that’s home to billionaires and President Donald Trump’s Mar-a-Lago Club, has been ground zero for some of the most frenzied buying.

Some of the migration is paired with job relocation, as Wall Street firms and hedge funds set up bases in the Sunshine State. Others are pandemic refugees looking to flee Covid hotspots or take advantage of Florida’s lack of a state income tax. And some are billionaires increasing their footprints, such as Steve Wynn’s purchase of an additional Palm Beach home for $18.4 million last month, or Robert F. Smith’s $48.2 million acquisition of two properties in North Palm Beach.

The Palm Beach County Clerk’s office recorded more than 20 home sales last year exceeding $20 million, compared with 10 in 2019, according to the Palm Beach Daily News. Early next month, a home on North Ocean Boulevard is scheduled to go on the market for $75 million, fully furnished by designer Sara McCann with everything from chaise lounges to frying pans.

Unlike the aftermath of the 2008 financial crisis, which brought a glut of supply and sharp price decreases, there’s now very little in the way of offerings to show potential buyers.

“We’ve gone from anxiety buying to there’s no inventory and what am I going do?” said Liza Pulitzer, senior associate at Brown Harris Stevens. “We’ve even had people buy an interim house when they couldn’t find a rental.”

One couple learned a house had gone into contract as they arrived for a showing, said John Cregan, an agent at Sotheby’s International Realty. Artist Camilla Webster has received several notes on her front door asking her to sell her first-floor condominium with outdoor space.

Many of the homes being rented and sold now are off-market, private deals. Some buyers let current residents stay on, just to grab their piece of the rock. Older homes are being torn down, with many of the one-story cottages on the island’s North End being replaced in a building boom that’s “probably the biggest annoyance” on the island, Pulitzer said. Speculators, flippers and homeowners alike are seeing huge returns.

In July, New Yorkers Marilyn Rosee and Sandra Siegal turned down an offer of $530,000 for the South End condominium they’d paid $326,000 for less than three years ago. Then a broker called just before Christmas with a buyer who hadn’t seen the apartment but was willing to pay $650,000.

“It’s a very Covid-y story,” said Rosee, who with Siegal also has an apartment in New York and a house in East Hampton.

For their next Palm Beach home, which they found through a tip from a friend, the couple upsized so they can both have offices to do their New York jobs remotely. Their $1.16 million apartment has a wrap-around terrace.

The rental market picked up as the weather got colder and the “season” arrived, especially with the supply limited by condo rules restricting the number of short-term rentals in a year. Clark convinced one friend to stay with his parents while he rented his home for $10,000 for the week between Christmas and New Year’s.

Some have turned to long-term stays in hotels as an alternative. At the Colony, rooms are being booked for a month, and villa apartments for as long as 18 months. The Breakers is seeing similar bookings, which has helped soften the blow of a decrease in tourism.

As for changes in residency, Florida makes it easy to domicile, while New York has a high bar to let people depart. Lawyer Paul Comeau of Hodgson Russ expects plenty of tax audits by New York state for the pandemic year of 2020. New York also issued guidance that employees working remotely outside the state would still be on the hook for city taxes unless the employer has local offices.

Migrants have started to look at renting office space, according to Lesley Sheinberg and Barbara LeBrun of NAI/Merin Hunter Codman, who represent the Esperante building in downtown West Palm Beach.

“Every single showing this week we have there is from people up north or different states, either wanting to have a presence here, so they don’t have to commute back and forth, or wanting to get out and move their firm here,” Sheinberg said.

“The residential market is driving this,” LeBrun said.

To accommodate pandemic migrants, Jack Coppola, a concierge for high-end clients, has equipped homes and boats with towels, sound systems and board games. At McCann’s Hive Home, Gift & Garden store in West Palm Beach, decorators and homeowners have been clearing out inventory.

Clark, the real estate agent who’s also an interior designer, goes the distance to make sure clients can just arrive with a toothbrush and hang up their clothes. To help a broker close a six-month rental for $1 million, he called in favors around town to find 30 pieces of outdoor furniture, gym equipment, two refrigerators and 13 new televisions.

“It’s trickle down theory; they come, everybody wins,” Clark said. “The wallpaper hanger wins, the painter wins, the guy doing the upholstery. I had to pay double to the upholsterer to get it done quick.”