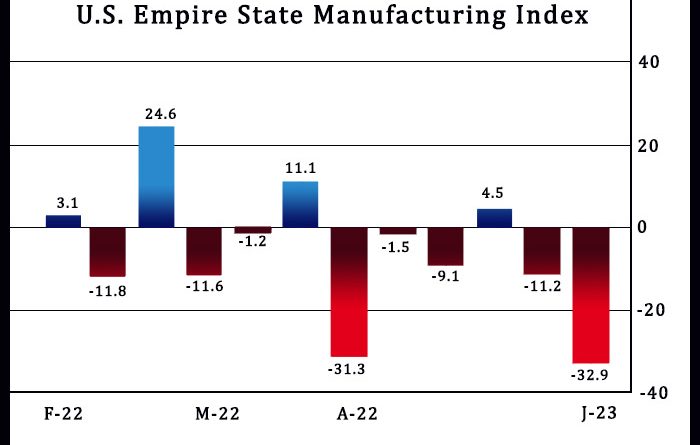 New York manufacturing activity has seen a significant contraction in the month of January, according to a report released by the Federal Reserve Bank of New York on Tuesday.

The New York Fed said its general business conditions plunged to a negative 32.9 in January from a negative 11.2 in December, with a negative reading indicating a contraction. Economists had expected the index to climb to a negative 4.5.

“This coupled with tighter financial markets and a weaker labor market weigh on regional and national factory activity,” Chadha added. “The result has been a dwindling pipeline and downbeat sentiment.”

The unexpected slump by the headline index partly reflected significant decreases in new orders and shipments.

The number of employees index also slid to 2.8 in January from 14.0 in December, although a positive reading still indicates modest job growth.

The report also said the prices paid index tumbled to 33.0 in January from 50.5 in December, while the prices received index fell to 18.8 from 25.2.

The Philadelphia Federal Reserve is scheduled to release its report on regional manufacturing activity in the month of January on Thursday. The Philly Fed Index is expected to rise to a negative 11.0 in January from a negative 13.8 in December.

Have You Selected SEM For Your Portfolio?

US Navy officials investigating cause of jet crash in California; status of pilot unknown