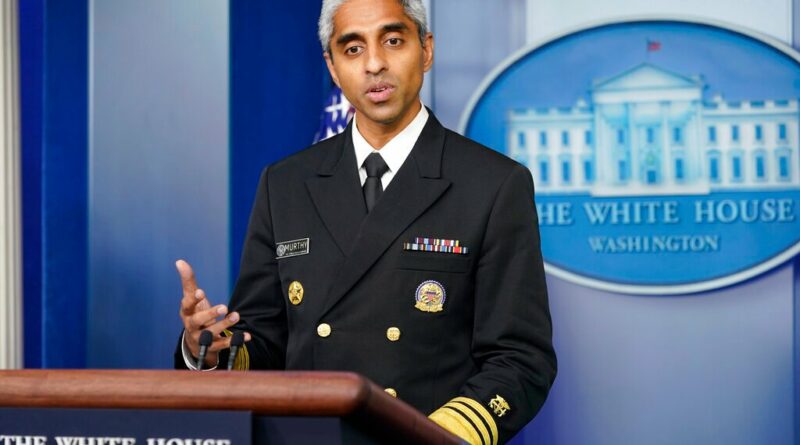 Appearing at the the White House briefing room, Murthy the role that social media plays as a super spreader of Covid-19 and vaccine disinformation.

“Today we live in a world where misinformation poses and imminent and insidious threat to our nation’s health,” Murthy said, as he blamed falsehoods as one reason that the pace of vaccinations was slowing.

On Thursday, Murthy issued a Surgeon General Advisory, reserved for urgent public health threats, on the dangers of health misinformation. (Read it here). Included are a host of recommendations for tech platforms, including redesigning algorithms to avoid amplifying misinformation and take quicker action against “super spreaders” and repeat offenders.

As the for news media, he called on media organizations to train journalists and editors ways to avoid amplifying misinformation and to “proactively address the public’s questions, as well as to reconsider headlines that “shock and provoke.”

“If a headline is designed to fact-check a rumor, where possible, lead with the truth instead of simply repeating details of the rumor,” the report recommended.

“For example, when discussing conflicting views on an issue, give readers a sense of where the scientific community stands and how strong the available evidence is for different views,” his report recommended. “Consider questions like: How much disagreement is there among experts? Is a given explanation plausible even if it is unlikely? If evidence is not equally strong on all sides of an issue, avoid presenting it as such.”

During the briefing, there was no mention made of specific individuals, but there have been concerns that voices on the right have been feeding doubts about the vaccine, including Fox News host Tucker Carlson. On a recent show, Carlson suggested that the alarm that D.C. officials have over the unvaccinated “make you think” that “maybe none of this is really about COVID. Maybe it’s about social control.” Fox News has pointed to other figures on the network who have encouraged viewers to get the vaccine.

But much of the White House’s attention was on social media and the way that misinformation can quickly spread.

White House Press Secretary Jen Psaki said that senior staff and members of the Covid-19 response team have been in touch with executives at the platforms and are flagging problematic posts.

She said that the White House has recommended a series of proposed changes to Facebook, including providing a way to measure and share the impact of misinformation on their platform, not just the level engagement. She also said that the White House wants Facebook to create a “more robust” enforcement strategy, as she said that there are “about 12 people that are producing 65% of the misinformation.” They want Facebook to more quickly remove posts that violate their standards, as well as to change their algorithm to boost quality information.

“They have done it before but have chosen not to do it in this case,” she said.

Hurricane Laura Hit The Oil And Gas Industry When It’s Down. But Don’t Expect A Reckoning.