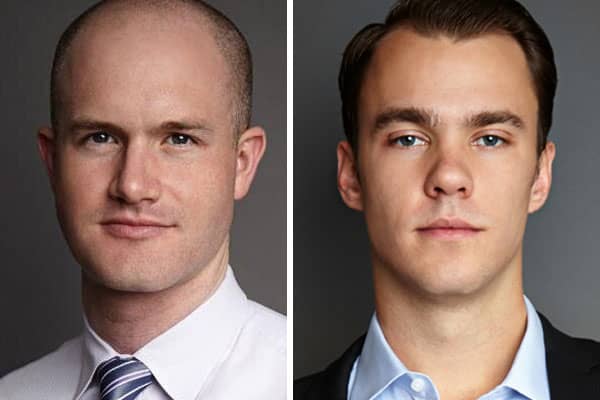 Cryptocurrency exchange Coinbase went public on Wednesday in a direct listing that opened at $381 per share, valuing the company at $99.6 billion. In anticipation, bitcoin hit a record high of over $64,000 Wednesday morning, according to data from Coin Metrics.

But when Coinbase co-founders Brian Armstrong and Fred Ehrsam first started the company in 2012, "a bitcoin was worth $6 and only known by a few nerds on the internet," Ehrsam tweeted on Wednesday.

At the time, "bitcoin was the crazy idea that the world could have a digital money for everyone," he said.

Armstrong and Ehrsam first met on Reddit and shared a bullish view on bitcoin and the cryptocurrency space as a whole, Ehrsam said on Twitter. In turn, they decided to launch Coinbase with the "mission" to "make crypto easy to use."

Although the company currently has a multibillion-dollar valuation, its beginnings were "not glamorous," Ehrsam said. "Coinbase launched out of a two bedroom apartment we shared with another company."

Over the first two years in business, Coinbase grew to a company with over 1,000 employees.

But between 2014 and 2017, Coinbase faced "serious hardship," Ehrsam said. "In the 3 years … the outside world thought crypto was dead."

For example, after rallying to nearly $20,000 in 2017, bitcoin's price collapsed and lost a third of its value in a single day, and in 2018, it dropped to as low as $3,122, wiping out billions of dollars from the total cryptocurrency market value.

"Over a third of employees left," Ehrsam said.

Despite the hiccups, Coinbase continued to grow.

Ehrsam left Coinbase in 2017, but remained on its board and owns an estimated 6% of its stock, according to Forbes.

The company recently reported an estimated $1.8 billion in revenue for the first quarter of 2021 and up to $800 million in net income. Coinbase now has 56 million users, up from 43 million at the end of 2020.

Although some investors are calling Coinbase's market debut a "watershed" moment for the cryptocurrency industry, as CNBC reported, many also note risks to come, including volatility and potential government regulation, to name a few.

Looking back, Ehrsam is not only proud of Coinbase, but of the growth of the cryptocurrency space.

"Today, almost 10 years later, crypto is a sprawling ecosystem quickly redefining money, the financial system, and, ambitiously, the internet itself," he said on Twitter. "Institutions have adopted, including banks, asset managers, fintech companies, and even non-financial services companies."

Ehrsam currently has a net worth of $1.9 billion, according to Forbes.

Don't miss: This 36-year-old Brooklyn artist made over $46,000 in six weeks selling NFTs

Ford says will continue to sell diesel models in India