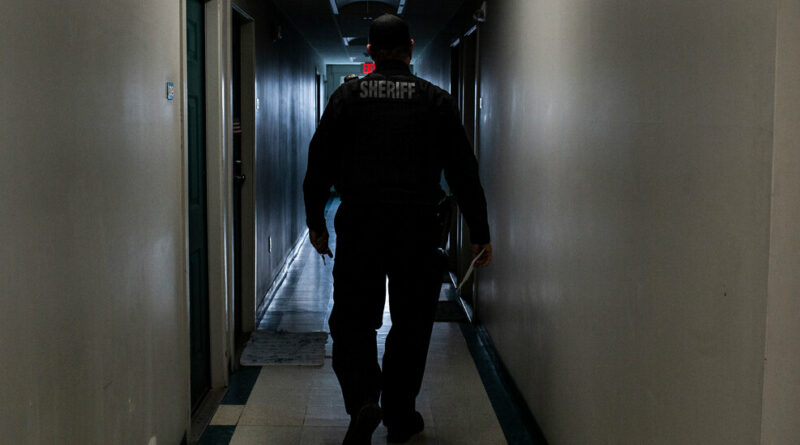 For once, Washington seemed to get in front of a crisis.

When the first wave of coronavirus spread across the country in the spring of 2020, it ravaged the economy, pushing millions of low-income tenants to the brink of eviction. Over the next year, Congress responded with a series of relief packages that included a $46.5 fund billion for emergency rental assistance.

That represented one of the biggest infusions of federal housing aid in generations. But the promise of that help has long since given way to confusion and desperation as national eviction protections lapse with the vast majority of that rental assistance sitting unspent, precipitating the precise crisis Washington had hoped to avoid.

How did this happen?

That is what White House officials and members of Congress are asking. On Friday, the House Financial Services Committee will hold a hearing to examine the shortcomings of the fund, known as the Emergency Rental Assistance Program, which had only distributed a fraction of its total funding by Aug. 1, according to the Treasury Department.

The Supreme Court’s decision to strike down the national moratorium on evictions last month has transformed a vexing administrative problem into an acute human crisis, placing at least 2 million renters in immediate danger of eviction, according to one estimate.

Federal and local officials, housing experts, landlords and tenants cited an array of problems that slowed the flow of aid: bureaucratic missteps at all levels of government, onerous applications, resistance from landlords, the reluctance of local officials to ease eligibility requirements for the poor, difficulty raising awareness that rental aid even existed, and a steep rise in rents that increased the incentive for kicking out low-income tenants.

More than anything, the failure illustrates the difficulty of trying to build a vast new social program from scratch in under a year, and the inability of policymakers to fully anticipate the challenges of navigating a rental market dominated by mom-and-pop operators outside the more regulated world of owner-occupied housing.

“We asked state and local governments to do something they’d never done before,” said Vincent Reina, a professor of urban planning at the University of Pennsylvania who has studied pandemic aid programs. “They had to design large programs with complex systems in real time, then modify them in real time — and at the same time, we’re expecting these programs to resolve longstanding problems in the housing market.”

Rental housing presents unique difficulties for government. Many tenants do not have official leases, subleasing apartments from friends, renting rooms with strangers or living in illegal units. That makes them hard to find, and harder to help because most aid programs are geared to the formal rental market, which, for the most vulnerable families, doesn’t exist.

“We are seeing tenants with rental agreements on napkins,” Brandon Scott, Baltimore’s Democratic mayor, said in an interview.

Over the past several months, the White House and Treasury Department have been racing to deal with the program’s problems, repeatedly revising guidelines to allow tenants to receive payouts with a minimum of documentation, while enlisting state judges and even law school students to help tenants delay or prevent their evictions.

Gene Sperling, who is in charge of overseeing pandemic relief programs for President Biden, estimated that despite the shortcomings of rental aid so far, about 40 percent of vulnerable tenants in the country are either receiving assistance or temporarily protected from eviction by state and local moratoriums.

“If lower-performing states and localities don’t pick up the pace, there will be a meaningful and painful gap for hundreds of thousands of families,” Mr. Sperling said. “That is unacceptable and it’s why we are still pushing as hard as we can.”

No administration has previously embraced a similar role in attempting to halt evictions, which are overseen by state courts.

The federal government’s main rental subsidy is the Section 8 voucher program, which pays private landlords and nonprofit groups the difference between market rate and the amount a tenant can pay. Funding has been stagnant for decades, and waiting lists of up to 10 years are not uncommon in many cities.

“We have a shortage of rental housing, a secular decline in affordability, and cost-burdened renters have very little buffer to aside funds for a rainy day,” said Ingrid Gould Ellen, faculty director of the Furman Center for Real Estate and Urban Policy at New York University. “The pandemic only underscored the need for a standing federal emergency rental program.”

But Section 8, with its laborious certification requirements, did not provide a useful template for the new emergency rental assistance funds. So when the virus hit — and the money started raining down — the federal government, states and localities essentially had to invent an entirely new system, a process that would have otherwise involved years of trial and error.

Attempts to stave off evictions go back to last spring, when about $4 billion in rental assistance was tucked into the $2.2 trillion CARES Act signed by then-President Donald J. Trump last March. Unlike other federal emergency programs, like stimulus checks, which were mainly controlled by Washington, rental assistance was given to states and large cities and counties, which were free to design their own programs to suit their local needs.

From the beginning, local governments struggled with administrative headaches. Some cities and states couldn’t distribute rental aid until the legislature wrote a bill to create the program. Some ran their programs in house, others partnered with nonprofits and everyone realized they needed new staff to process applications.

This was the moment when officials first understood how much different the low-income rental market was from other housing markets. In addition to subleases and roommates whose claim to their space often isn’t documented (or known) by the landlord, there is also a vast market for illegal units. In Los Angeles County alone, for instance, there are estimated 200,000 illegal units.

“There’s a completely hidden story about how do we access millions of tenants that are in un-permitted units,” said Vinit Mukhija, an urban planning professor at University of California, Los Angeles.

Even as localities struggled to give out aid, they were deluged with applications and could not meet the demand. In mid-2020, Democrats in the House of Representatives were clamoring for more rental assistance funding, passing no fewer than three bills to create a $100 billion rental fund. The measures all died in the Senate, then controlled by Republicans. But by winter, even conservatives recognized the need to do something to stave off a crisis.

In December, as Republican and Democratic leaders worked on a second pandemic bill, a small group of Republicans drafted their rental assistance fund bill, allocating about $25 billion to the fund, which passed both houses of Congress and was signed by Mr. Trump.

Then the momentum stalled. The Trump White House took weeks to draft the guidance necessary for states and cities to create an application process. When it finally released the guidelines — at 4 p.m. the day before Mr. Biden was to be sworn in — they included detailed reporting requirements and gave landlords weeks to decide whether they wanted to participate.

Mr. Biden’s new team studied the mistakes that their predecessors had made under CARES, but it still took about six more weeks to release a revised version of the guidance removing some of the impediments.

The early rental programs were so difficult to access and their fraud protections so weak that they became impenetrable to people who genuinely needed help. Tenants often needed formal documentation on multiple fronts — their annual earnings, how they were affected by the pandemic and a written lease with their landlord.

The tenants also needed their landlord to agree to take the money under whatever terms a particular program allowed, like forgiving part of the tenants’ back rent, and many property owners balked.

“We got a lot of rejections from landlords who said, ‘Thanks for the $10,000 but I’m not going to sign onto that,’” said Emilio Salas, executive director of the Los Angeles County Development Authority.

More money was on the way. In March, Democrats, now in control of Congress, passed the American Rescue Plan, which included another $21.5 billion in rental assistance, bringing the total amount of money in the fund to about $46.5 billion, and nearly $50 billion if the CARES money was factored in.

Soon after he was hired that same month, Mr. Sperling was bombarded with complaints from housing groups that states were moving too slowly — and he undertook the first of several rewrites of the guidance given to states and cities intended to speed up payments.

At the same time, White House officials and aides with the Treasury Department began working the phones to cajole, advise and, in some cases, pressure local officials to move faster — while working with state court judges to slow down eviction proceedings.

But there is only so much the White House could do, and states have continued the laborious task of building the new system themselves, which ultimately takes time.

Thus, when California started a statewide rental program earlier this year, it made many of the same mistakes that city and county governments had before — unwieldy documentation, an inability to help tenants with subleases and a clause that participating landlords had to forgive 20 percent of the back rent.

The state has now made many of the same adjustments, replacing documentation with attestation, accepting informal leases and agreeing to pay back rent. The aid has started flowing. Since June California has more than quadrupled its pace of payments.

In a series of studies published over the past year, Dr. Reina, the urban planning professor, has found several consistent themes.

Localities that targeted low-income tenants were able to get the money out faster. So did those who partnered with nonprofit groups. Flexibility was also key: Most rental aid programs began with a bureaucratic burden that made money hard to distribute, but the ones that reduced them quickly could make up the pace.

Still, many states — especially those controlled by Republicans — remain unwilling to take the risk of relaxing their application standards, fearful they will encourage fraud.

While the cash is still not flowing as fast as Mr. Biden’s team would like, many states have increased their spending over the past two months. And the administration now has additional leverage against the laggards — the imminent threat of an eviction crisis that will hit both red and blue states, and a provision in the funding bills that allows the Treasury to claw back unspent cash by the end of this month.

For all the technical issues, the success of the program is likely to come down to a fundamental shift in thinking among state and local officials: that keeping tenants in stable housing is not only a core function of government but a humanitarian necessity.

Mayor Greg Fischer of Louisville, Ky., which has already distributed almost all of its funding to tenants and landlords, said the key to his city’s success was developing a “nonconventional” application form that required a minimum of documentation — two pay stubs are sufficient to prove annual income, for instance.