Home » With Warning to Democrats, Manchin Points the Way for Biden’s Agenda 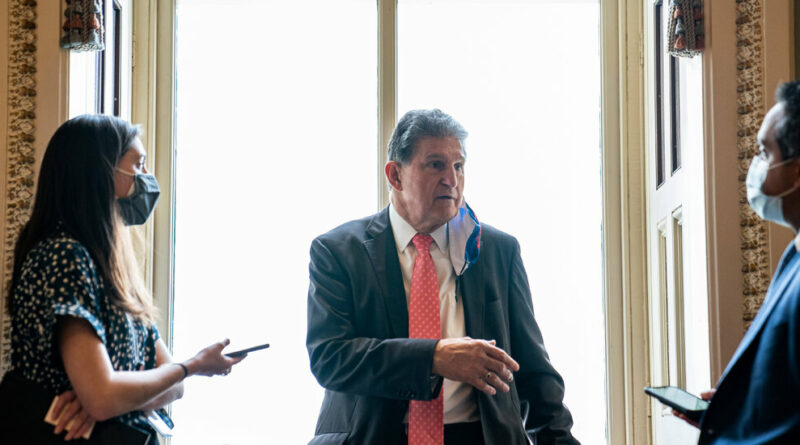 WASHINGTON — Senator Joe Manchin III of West Virginia flashed a warning sign for President Biden’s infrastructure ambitions this week, renewing his pleas for fellow Democrats not to ram through a large spending bill without first working to compromise with Republicans who have panned the president’s plans.

In a divided Washington, the chances that such a compromise will materialize are slim — at least for a sprawling spending plan of up to $4 trillion, as Mr. Manchin, a pivotal swing vote in the Senate, and administration officials favor. But even so, Mr. Manchin’s calls for bipartisanship were less an insurmountable obstacle for Democrats than a road map for Mr. Biden if he wants his party’s tiny congressional majorities to deliver him another economic policy victory.

It involves reaching out to Republicans to explore possible areas of compromise while laying the groundwork to steer around them if no such deal materializes.

Mr. Biden has already begun the outreach to Republicans, while senior Democrats in Congress are exploring a budget maneuver that would allow the infrastructure bill to pass quickly with only Democratic votes. Both are aimed at increasing the pressure on Republicans to compromise — and, if they will not, giving Mr. Manchin and other moderate Democrats whose backing Mr. Biden needs the political cover to accept an all-Democratic plan.

“I’m going to bring Republicans to the White House,” Mr. Biden said on Wednesday. “I invite them to come. We’ll have good-faith negotiations. And any Republican who wants to get this done, I invite.”

A moment later, he urged Republicans to “listen to your constituents,” arguing that voters across America back infrastructure spending on the scale Mr. Biden envisions — not the scaled-back versions many Republicans have floated.

The comments reflected a huge caveat in Mr. Biden’s willingness to negotiate that Republicans say could scuttle any deal: The president wants to be the one to set the terms of how large the problems are, and of whether the proposed solutions are sufficient.

Behind the scenes, his team is working to soften the ground for bipartisan work. Administration officials are considering carving off some parts of Mr. Biden’s economic agenda into smaller pieces that could attract 10 or more Republican votes each, starting with a bill focused on supply chains and competition with China that the Senate is set to take up next week. They have discussed postponing Mr. Biden’s proposed tax increases on corporations, which Republican oppose, if doing so would get Republicans on board with a spending bill. And they have considered financing the spending through any means acceptable to a critical mass of Republicans, including borrowing, as long as they do not raise taxes on people earning less than $400,000 a year.

The negotiations appear, at first glance, like a slower-moving repeat of the cross-party dance that produced a nearly $1.9 trillion economic aid package this year. Mr. Biden started with a large proposal. Republicans countered with one a third its size. White House officials wrote them off as unserious, Senate Democrats stuck with the president, and the bill passed with every Republican voting in opposition. 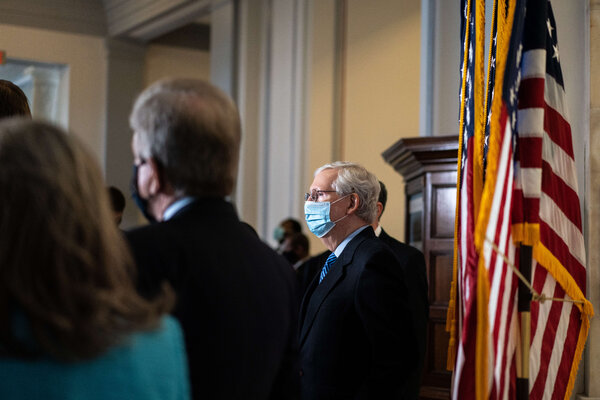 This version will take longer, in part because Mr. Manchin and other moderate Democrats want it that way. In interviews and, this week, a prominent op-ed piece, Mr. Manchin, who could be the 50th vote Democrats need to pass a bill through the budget reconciliation process, has blared his message: First, try bipartisanship.

“Senate Democrats must avoid the temptation to abandon our Republican colleagues on important national issues,” Mr. Manchin wrote in the Washington Post op-ed on Thursday. “Republicans, however, have a responsibility to stop saying no, and participate in finding real compromise with Democrats.”

Privately, many Democrats and Republicans say there is little chance that lawmakers could produce a bill as ambitious as Mr. Manchin wants while also attracting at least 10 Republican votes in the Senate. Liberals and conservatives are trillions of dollars apart in their appetites for how much to spend and what to spend it on — and nowhere near one another on how or whether to pay for any of it.

Some Republicans are pushing for a bill that is a third the size of Mr. Biden’s initial infrastructure plan, an echo of their position in the debate on the stimulus bill, while rejecting Mr. Biden’s proposed tax increases on corporations. At the same time, progressive Democrats are clamoring for the White House to go bigger, and would be unlikely to support a whittled-down plan tailored to win Republican backing.

Congressional Democrats say Republicans’ resistance to spending on the order Mr. Biden — and even Mr. Manchin — has called for, coupled with widespread opposition to most tax increases, leaves little chance of common ground.

“They don’t want to pay for anything,” said Senator Chris Van Hollen, Democrat of Maryland. “I think the faster everyone recognizes that Republicans are not going to support these efforts, the better. But I am OK with people trying for a while, as long as it doesn’t run the clock out.”

Republican senators, singed by their experience on the pandemic aid bill, responded to Mr. Biden’s gestures to bipartisanship by issuing a chilly statement saying that the last time he made a public plea to work together, “the administration roundly dismissed our effort as wholly inadequate in order to justify its go-it-alone strategy.”

In an appearance on “Fox News Sunday,” Senator Roy Blunt, Republican of Missouri, pushed the administration to negotiate an infrastructure measure that would represent about 30 percent of the $2.25 trillion being proposed, before turning to budget reconciliation for any additional spending increases.

“My advice to the White House has been, take that bipartisan win, do this in a more traditional infrastructure way and then if you want to force the rest of the package on Republicans in the Congress and the country, you can certainly do that,” Mr. Blunt said.

Importantly, Republicans have no interest in the corporate tax increase that would essentially undo their most significant legislative achievement of the Trump era. Neither do business groups, which have helped broker some bipartisan compromises on economic issues in the past but have lost some power in recent years as populist impulses have swept both parties.

Senator Mitch McConnell, the Kentucky Republican and minority leader, called the tax proposal “an effort to rewrite the 2017 tax bill,” which itself passed via budget reconciliation with no Democratic votes.

The Trump tax law “in my view was principally responsible for the fact that in February 2020 we had the best economy of 50 years,” Mr. McConnell said. “But they are going to tear that down.”

Still, business lobbyists and some lawmakers remain hopeful that Mr. Manchin’s appeal could prod Mr. Biden and congressional leaders toward a set of mini-compromises on infrastructure. Such deals could including spending big on research and development for emerging industries, like advanced batteries, in the supply chain bill, which carries bipartisan sponsorship in the Senate. They could also include spending a few hundred billion dollars on highways and other surface transportation projects. That could satisfy at least some of Mr. Manchin’s quest for bipartisanship and give both parties the ability to claim victory.

Some Democrats worry that such compromises could sap momentum for the rest of Mr. Biden’s agenda, including forthcoming proposals for education, child care and more. Others say the opposite: that a few deals would give Mr. Biden and his party traction with voters, and fuel to pass a large spending bill, funded by tax increases, later this year with only Democratic votes.