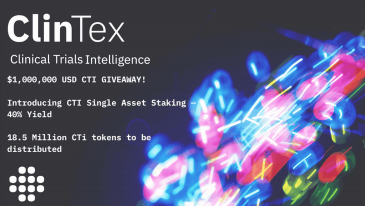 The rise of the crypto sector over the past decade, and the recent $1 trillion market capitalization milestone, has put the crypto ecosystem in line with other big industries, such as the pharmaceutical industry. ClinTex and its Clinical Trials Intelligence (CTi) platform, is aiming to connect the two industries, providing predictive analytics, machine learning, and blockchain implementation in clinical trials.

The Clinical Trials Intelligence platform by ClinTex is powered by the native CTi token. The token serves as a gateway for entering the platform via a staking license model. Furthermore, the CTi token can be used as reward payment for clinical data providers and third-party clinical investigators.

The company’s initial plans were inclusive of the organization of an initial exchange offering, but with the rapid progression of Clintex`s platform development and the reached softcap target during the pre-sale stage, we changed the strategy and secured listing on one of the largest crypto exchanges, KuCoin. Since the listing announcements, our CTi token has experienced several surge episodes. Due to the support that we received from our supporters, we are now offering a Thank You gift for all CTi hodlers. Everyone that owns CTi is eligible to receive rewards with a total reward pool of $1 million paid in CTi tokens via a brand new staking contract, designed to reward the patience of CTi holders.

The CTi utility token would be distributed to all stakers that will take part in the CTi staking license program via our Web3 app. Тhen, you will have to, connect to your wallet provider, but please note that at the time of writing we are planning integration only with Metamask. The scheduled launch of the staking contract is April 1, 2021.

We are allocating 20 million CTi in rewards and even new token holders can take part in the staking event. You can buy them from KuCoin`s platform for example, and then go directly to Clintex`s staking webpage for vesting them in the reward contract.

On top of that, we decided to develop another earning opportunity through staking for our supporters, called Compound staking. Users can compound their tokens and rewards for another term, earning rewards on both the initial amount and the first reward.

For example, if CTi holders decide to stake 1,000 tokens in a three-month staking contract, they would earn a total of 1,210 CTi. However, if they decide to compound the 1,210 CTi tokens for a 30-day staking period, the total amount of earnings would become 1,283 CTi tokens.

The CTi token distribution is a way for us to thank the community which believes that ClinTex is the way for revolutionizing the realm of clinical trials and medicines development. The implementation of blockchain technology in the pharmaceutical industry would ultimately cut down the costs for research, development, and trialing for present and new drugs.

The Thank you gift for all CTi holders is scheduled to run for six months – from April 1 to September 30, 2021, when the public launch of the first CTi app (CTi-OEM) is about to happen.

ClinTex has an array of seven applications, which all work with the CTi token as a medium for data transactions. The first of them would be the CTi-OEM – a tool for operational oversight of clinical trials for clinical project managers, clinical data managers, and remote staff. The OEM allows for a faster and more accurate decision-making process, which streamlines clinical trials and cuts downtime and operational costs.

Our platform is aimed at enabling collaboration between industry participants, without sacrificing the disclosure of intellectual property. And with a $1.25 trillion pharmaceutical market, the possibilities for streamlining the way companies make and test their medicines would have a major impact on society, essentially making medications cheaper, and faster to produce.

The ongoing COVID-19 virus outbreak showed just how important is the collaboration between different organizations and pharma entities in order to produce vaccines and anti-COVID medication faster, and with enhanced effectiveness.

AT Capital Markets Fined $320K and Licence Suspended by FSRA