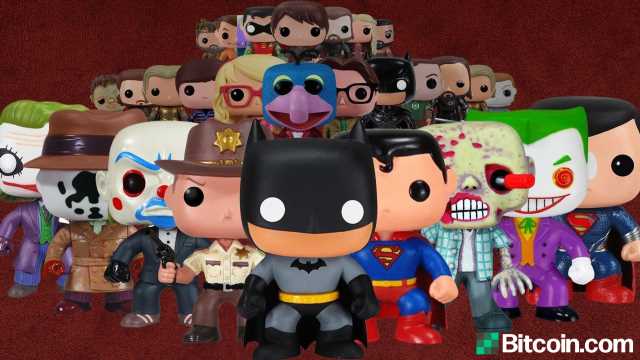 Following the release of new Garbage Pail Kids non-fungible token (NFT) assets and the recent Godzilla NFT collectibles from Topps, the leading pop-culture consumer products company Funko Inc., revealed the company is also joining the NFT fray. Funko announced on Thursday that the company has acquired Tokenwave, LLC and the investment aims to project the firm into the digital assets and NFT markets.

The publicly listed firm Funko (Nasdaq: FNKO) is a well known American company launched in 1998 by Mike and Claudia Becker. Since then the company has catapulted to one of the top pop-culture brands throughout the last two decades. Funko makes a myriad of products, but the company is best known for licensed bobbleheads and vinyl figures. The investment into Tokenwave, LLC aims to “extend the company’s pop culture platform to include digital assets.”

Tokenwave is the developer of Tokenhead, an application for smartphones that allows people to collect NFTs. The app is available via Android and iOS and the 10 million NFTs hosted on the platform get 100,000 visitors per day. Exact numbers about Funko’s acquisition of Tokenwave were not disclosed. Funko aims to launch the NFT offerings this June and each week the starting price will begin at $9.99. The Funko-centric NFT products will be hosted on the WAX blockchain marketplace according to the announcement.

“Funko is thrilled to advance another platform that our fans and collectors will love and find valuable,” Funko CEO Brian Mariotti detailed. “Our strategy in this space is clear – bring the value-added NFT opportunity to our licensing partners to leverage our broad range of existing pop culture content across Television, Movies, Sports, Music, Anime, Video Games and Comic Books. Our amazing licensing partners are excited about our entry into this new digital space and we believe the diversity of our licensing portfolio sets us up for long-term success,” the executive added.

The 23-year-old company gets over $500 million in revenue per year according to statistics and since Mariotti started as CEO, Funko has expanded its toy lines a great deal and has signed with well known firms.

The NFT industry will likely expand Funko’s product lines and the company has already manufactured over 20,000 different products since 1998. The announcement also says that the Funko NFTs will leverage WAX’s patented NFT technology which is called “vIRLs.” Mariotti called the technology “powerful” and he thinks the NFT space is all about content and Funko has been providing that for the last 20 years, the CEO highlighted.

How much farther will Bitcoin fall?!? + Vitalik to make 51% attack obsolete! [Crypto News]

CODEX: The Exchange That Changes the Way You Trade Crypto