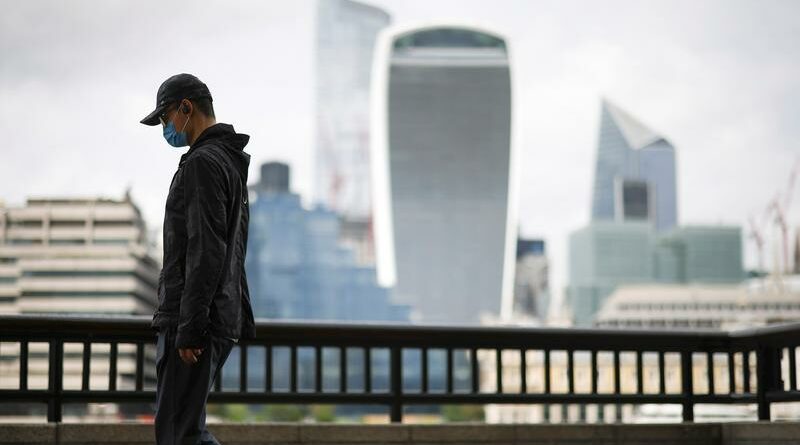 LONDON (Reuters) -The prevalence of COVID-19 infections in England hit its highest level since the start of the year, reaching around 1 in 50 people in the week ending Oct. 22, Britain’s Office for National Statistics said on Friday.

FILE PHOTO: The City of London financial district is seen as a man wearing a protective face mask walks along the River Thames, amid the coronavirus disease (COVID-19) pandemic in London, Britain, July 27, 2021. REUTERS/Henry Nicholls

The prevalence of infections rose for a fifth straight week, having been at 1 in 55 people in the previous week, the ONS said.

Prevalence was last at 1 in 50 people in the week ending Jan. 2, shortly before England began a third national lockdown. The reproduction “R” number was also estimated to be slightly higher.

Since then, a vaccination programme has largely broken the link between cases and deaths from COVID-19. Prime Minister Boris Johnson has said he plans to tolerate rising infections without resorting to a new lockdown.

The latest ONS infection survey covers the week when Britain reported more than 50,000 daily COVID-19 cases for the first time since July. Since then, daily reported cases have dipped.

The ONS tries to estimate an infection number in the community that is unaffected by fluctuations in testing patterns.

The percentage of people testing positive for COVID-19 in England remained highest among children. The ONS estimated 9.14% of older school children had COVID-19 during the week ending Oct. 22.

Many schools have been on holiday this week, and the UK Health Security Agency urged students to get tested before they came back to school, saying it would “stop the infection in its tracks and keep as many children in the classroom as possible”.

In Wales, prevalence was estimated at 1 in 40 people, as First Minister Mark Drakeford warned that new restrictions may need to be brought in unless cases start to fall.

Drakeford said the use of COVID-19 vacine passes would be extended in Wales and people would be encouraged to work from home, steps that Johnson, who is in charge of health policy only in England, has so far not taken. 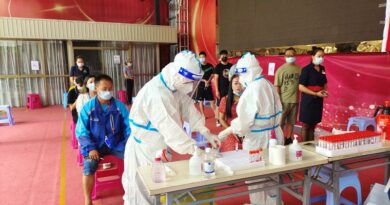