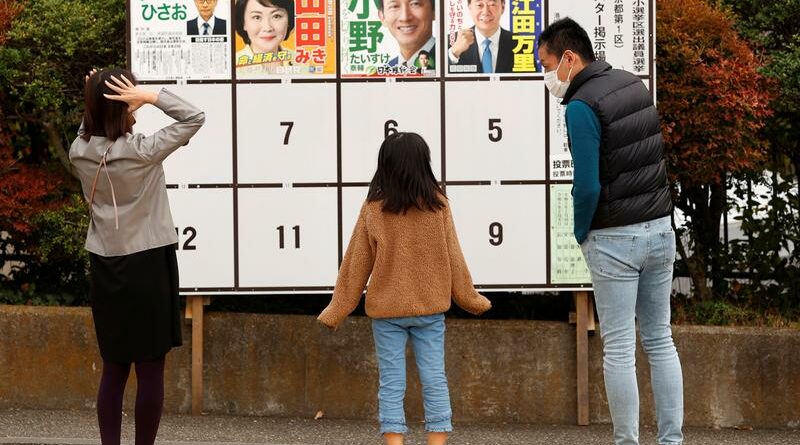 TOKYO (Reuters) -Japanese Prime Minister Fumio Kishida’s ruling coalition was projected to stay in power in Sunday’s election, but his party suffered steep losses, potentially weakening him just weeks into the job of leading the world’s no.3 economy.

It was too close to call whether Kishida’s Liberal Democratic Party (LDP) would maintain its majority in the powerful lower house of parliament, according to exit polls by public broadcaster NHK, but Kishida’s coalition with partner Komeito was forecast to maintain control.

“If the projections are correct, then Kishida should be able to continue to govern, or start to govern, but maybe there’ll be a bit of a question mark over his leadership in view of the Upper House election next year,” said Koichi Nakano, a professor at Tokyo’s Sophia University.

The vote was a test here for Kishida, who called the election soon after taking the top post early this month, and for his LDP, which has been in government except for brief spells since its formation in 1955.

But the party has been battered by its perceived mishandling of the coronavirus pandemic. Kishida, who has struggled to shake off an image that he lacks charisma, has failed to excite voters with policies to help poorer people here, while securing a big boost in military here spending and taking a harder line on China here.

One of the most high-profile LDP defeats was a former economy minister and the leader of one the party’s factions, Nobuteru Ishihara, who lost to an opposition candidate in a western Tokyo district.

The Osaka-based Japan Innovation Party led by popular politicians from the city’s government, was projected to more than treble its pre-election haul, putting it on track to surpass LDP partner Komeito as the third force in the lower house.

“The coalition itself won’t fall apart and the government will remain,” said Airo Hino, a professor at Tokyo’s Waseda University. “But even given this, the number of seats they have is definitely decreasing and this could make managing parliament difficult.”

Kishida’s publicly stated goal had been for the coalition to keep a majority, at least 233 seats here, of the 465 in the lower house. Before the election, the coalition had a two-thirds majority of 305, with the LDP holding 276.

Investors and political watchers have been focussed on whether the LDP could keep its majority as a single party. Losing that would weaken Kishida’s power base in the factional LDP, making it more reliant on the Komeito.

The usually splintered opposition was united, with only one party – including the widely shunned Japanese Communist Party – facing off against the coalition in most districts.

Some voters – like Yoshihiko Suzuki, who voted for the main opposition candidate in his district and the Communists in proportional representation – hoped the poll might teach the LDP a lesson.

Suzuki, 68 and retired, said the LDP’s years in power made it complacent and arrogant, underscored by a series of money and cronyism scandals.

“I hope this election comes as a wakeup call for them,” he added. “If it does, the LDP will become a better party, considering the number of talented lawmakers they’ve got.”

Burger Joints Cash In on Faux-Meat Mania as Shares Surge