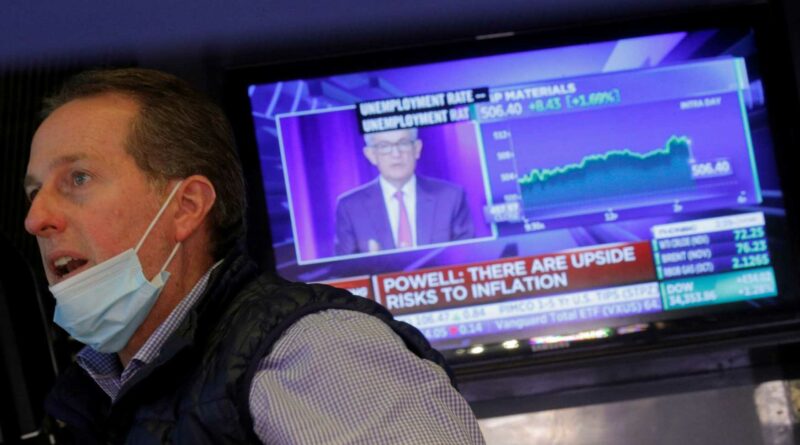 Stocks rose on Monday after President Joe Biden picked Jerome Powell to continue to lead the Federal Reserve over Fed Governor Lael Brainard. The move assuaged investors worried about switching central bank chiefs while the country's economy is trying to emerge from the Covid pandemic and battle inflation levels not seen in three decades.

The Dow Jones Industrial Average rose nearly 300 points. The S&P 500 and the Nasdaq composite rose about 0.9% each, with both hitting intraday all-time highs.

Powell, a former private equity executive, slashed interest rates to near zero and implemented emergency asset purchases in March 2020 to help backstop the market during the first wave of the Covid-19 pandemic, helping the financial system to remain operational during a sharp slowdown in economic activity. He also lead a landmark re-evaluation of the Fed's inflation targeting framework during the Covid crisis.

"It appears markets are reacting positively to the continuity signal. Continuity will be key during this potentially tricky phase of the recovery where inflation is elevated and sticky, demand growth is strong but cooling and capital and labor supply is gradually rebounding," said Greg Daco, chief U.S. economist at Oxford Economics.

Powell's renomination comes as inflation has exceeded expectations in recent months, leading the Fed to walk back its predictions that the rise in prices that accompanied the reopening of the economy would be "transitory." Some critics have said the Fed is waiting too long to tighten monetary policy.

The central bank began slowing its asset purchases in November, its first major scaling back of its emergency programs from 2020, and indicated that it could accelerate that process early next year.

Bank stocks and Treasury yields moved higher after the White House announced the Fed decision. Shares of JPMorgan and Morgan Stanley rose about 2% in early trading.

Brainard, who was seen as Powell's main competition and was favored by progressives in Washington for her stances on bank regulation and climate change, is being nominated for a vice chair position at the central bank but not to the top regulatory role many had expected.

"The fact that Brainard wasn't nominated for the Vice Chair for supervision role may also be a driving factor behind the positive markets momentum as there were some concerns that Brainard would push harder to tighten banking regulation in that role," Daco said.

Powell, a Republican, was first nominated to the Fed Board of Governors a decade ago by President Barack Obama and ascended to the top job under President Donald Trump. His ties to the Republican Party and previous confirmation for the Fed's top job were seen by some as reasons that he could be easier to confirm in a closely divided Senate than another candidate.

Elsewhere, Tesla shares rallied, gaining more than 3% after CEO Elon Musk said the electric vehicle maker's Model S Plaid could be launched in China by the spring of 2022.

Covid news also weighed on market sentiment, as German Chancellor Angela Merkel warned that the country was seeing a spike of the virus.

Goldman Sachs says now's the time to buy these 7 stocks

The S&P 500 was coming off a winning week, up 0.3%, on the back of a slew of stellar earnings reports from big retailers and strong U.S. retail data. The tech-heavy Nasdaq Composite jumped 1.2% last week. The blue-chip Dow fell 1.3% during the period, however.

Stocks have a track record of posting gains in Thanksgiving week, which will potentially set the stage for a year-end Santa rally.

Since 1950, the last five trading days of November have been traditionally positive, according to Sam Stovall, chief investment strategist at CFRA. Meanwhile, there's a two-thirds likelihood the market is up on the day before Thanksgiving Day and a 57% chance the day after the holiday, the strategist said.

U.S. markets will be closed Thursday on Thanksgiving Day. The stock market closes early at 1 p.m. ET on Friday.