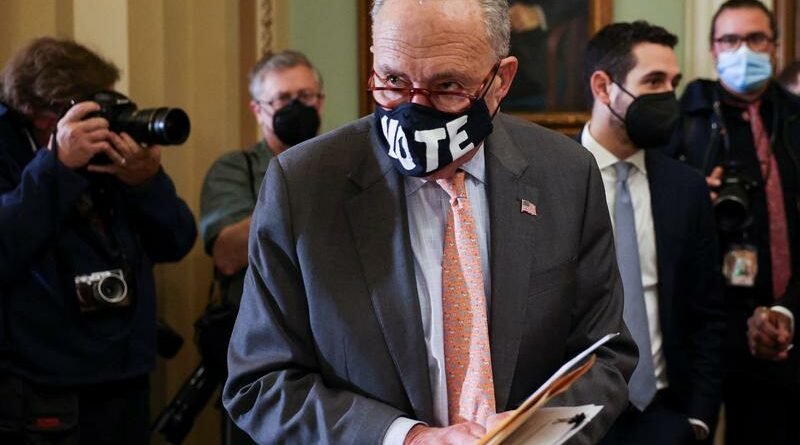 WASHINGTON (Reuters) -The U.S. Senate will vote this month on whether to change its rules to make it easier to pass a bill protecting voting rights, top Democrat Chuck Schumer said on Monday, days before the anniversary of the deadly Jan. 6 attack the Capitol building.

Schumer said the narrowly Democratic-controlled chamber needed to consider a change to its filibuster here rule after a wave of Republican-led states last year passed new restrictions on voting, inspired by Republican former President Donald Trump’s false claims that his 2020 election defeat was the result of widespread fraud.

“Much like the violent insurrectionists who stormed the U.S. Capitol nearly one year ago, Republican officials in states across the country have seized on the former president’s Big Lie about widespread voter fraud to enact anti-democratic legislation,” Schumer said in a letter to Democratic senators on Monday. “We can and must take strong action to stop this anti-democratic march.”

Senate Democrats tried to bring the voting-rights bill to a floor vote four times last year, and were repeatedly blocked by Republicans, who made use of the filibuster rule that requires 60 of the 100 senators to agree to advance most legislation.

The chamber is divided 50-50 between the two parties, with Democrats holding the majority by virtue of Vice President Kamala Harris’ tie-breaking vote.

Democrats could change the chamber’s rules with just a simple majority, but two centrist members of their party — Senators Joe Manchin and Kyrsten Sinema — have repeatedly voiced objection to doing so.

Sinema said in a statement on Monday that she continued to support both voting rights and the 60-vote filibuster, but added that she was open to debating the Senate’s rules.

Manchin did not immediately respond to a request for comment.

Nineteen state legislatures passed 34 laws restricting access to voting in 2021, according to the Brennan Center for Justice, a nonpartisan law and policy institute, the highest number since the center began tracking voting legislation in 2011.