Mrs Johnson is perhaps the most powerful unelected woman in history, with a direct line to Prime Minister Boris Johnson — her husband. She is known to have used her position as a force for good, influencing Government on issues like environmental degradation and women’s rights But what is little known about the 34-year-old is her family’s historical political ties to the Labour Party — Mr Johnson’s main power contender. The significance of Labour’s influence over Carrie’s family has been laid bare in a new book by Lord Michael Ashcroft, titled, First Lady: Intrigue at the Court of Carrie and Boris Johnson.

The life peer who shocked the nation with claims he made in Call Me Dave, a review of then-Prime Minister David Cameron’s life, has sought to shine a fresh light on Carrie, including her beginnings and rise to First Lady.

Lord Ashcroft notes how Carrie’s father, Matthew Symonds — who helped set up The Independent newspaper in the Eighties — was reportedly from a “staunchly Labour family”, which included her great-grandmother Emily Beaven.

In Openshaw, outside of Manchester, there is even a street named in her honour.

Her grandfather, John Beaven, was also closely tied to Labour through his work as a journalist at the historically left-wing Daily Mirror, where he was the publication’s political chief.

Of John’s ties to Labour, Lord Ashcroft noted: “The importance of newspapers in charting the seismic events of those pre-digital years cannot be overstated.

“The fact that Beavan interviewed each of these Prime Ministers [Harold Macmillan, Alec Douglas-Home, Harold Wilson and Edward Heath] and knew their staff, and was charged with covering political affairs for the benefit of the Mirror’s many millions of readers every day, meant that few journalists were as close to the source of power as he was, particularly when Labour was in Government.

“That he also contributed to some of Wilson’s speeches marked him out further.”

By 1970, John’s influence had grown to such levels that he was made a life peer by Mr Wilson, when he sat in the House of Lords.

Lord Ashcroft added: “Beaven did not sit in the upper chamber under his own surname but chose instead to style himself Lord Ardwick, in recognition of the district of Manchester which he knew so well.

“This decision might have been considered pretentious, but at the time Wilson did not object to it.”

Mrs Johnson joined the Conservative Party as a press officer in 2009, a year before she worked at the party’s Campaign Headquarters, and worked on Mr Johnson’s mayoral selection campaign.

In the following years, she also worked as a media special adviser for Cabinet heavyweights Sajid Javid and John Whittingdale.

Mr Javid was among those who leapt to Carrie’s defence when the revelations in Lord Ashcroft’s book were made public.

He particularly criticised the allegation that her behaviour was “preventing Mr Johnson from leading Britain as effectively as the voters deserved”.

In February, Mr Javid told BBC Breakfast that the remarks made were “undignified and unfair”.

He added: “I don’t think it’s fair or right at all, and I’ll tell you why.

“I just think as a general rule, a politician’s partner — any politician, any party — should be off limits.

“It’s the politician that has chosen to have a public life… I think this whole focus on Carrie Johnson in some of these reports, I think it’s very undignified and very unfair.”

Labour leader Keir Starmer also followed a similar line to Mr Javid, and said: “I approach politics on the basis that we should treat people with respect.

“Obviously, respect differences of opinion, but I do not go along with the idea that we should drag everybody into the gutter.”

First Lady: Intrigue at the Court of Carrie and Boris Johnson is published by Biteback Publishing and available to buy here. 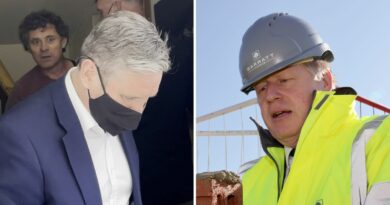