Nikki Haley has been called out for hypocrisy numerous times, and now her former boss is weighing in.

In an interview with Vanity Fair, former President Donald Trump dismissed the former ambassador to the United Nations’ attempts at laying a foundation for a possible 2024 presidential run.

Haley has said she won’t run if Trump decides to run again, but he seems to be keeping his plans close to the vest ― actually, his wallet, since he’s using a possible 2024 run as a fundraising tool.

“Knowing Trump, he’ll dangle it right up to the New Hampshire primary filing deadline,” a Trump confidant told the magazine. The end result, a Haley insider frustratedly admitted, is “a holding pattern” that is “unlike any previous race.”

But if Haley does run, she probably won’t get much support from Trump, who noted the former South Carolina governor has a habit of criticizing the former president one moment and supporting him the next.

“Well, every time she criticizes me, she uncriticizes [sic] me about 15 minutes later,” Trump told Vanity Fair. “I guess she gets the base.”

Haley and hypocrisy have long had a close relationship.

Last month, she attacked the Biden administration’s withdrawal of U.S. troops from Afghanistan ― and especially, the administration negotiations with the Taliban, which Haley compared to “dealing with the devil.”

However, she ignored that Trump planned to host Taliban members at Camp David just days before the 18th anniversary of the Sept. 11 terrorist attacks. He later canceled the meeting after the terrorist group claimed responsibility for a deadly bomb attack in Kabul.

In May, Haley criticized Vice President Kamala Harris for tweeting “enjoy the long weekend” before Memorial Day instead of honoring the troops.

However, she was roasted on social media after her own Memorial Day tweet focused on her family and not the soldiers being honored on the holiday.

And, as the video below shows, Haley was one of many Republicans who initially condemned Trump for inciting the Jan. 6 attack on the U.S. Capitol, only to come crawling back when it didn’t affect his popularity with the party base.

CORRECTION: A previous version of this story indicated that Donald Trump hosted members of the Taliban at Camp David in 2018. He invited them, but later canceled the meeting.

Republicans Sink Trump Court Pick For Being A Good Lawyer

This Japanese newspaper is sponsoring the Olympics. Its editors want the event canceled 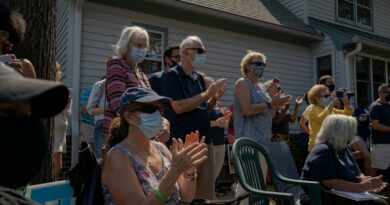 With Abortion Rights Under Threat, Democrats Hope to Go on Offense