Home » Politics » Jill Biden Reflects on Military Children & Importance of Their Education: 'We Can Give Them a Community' 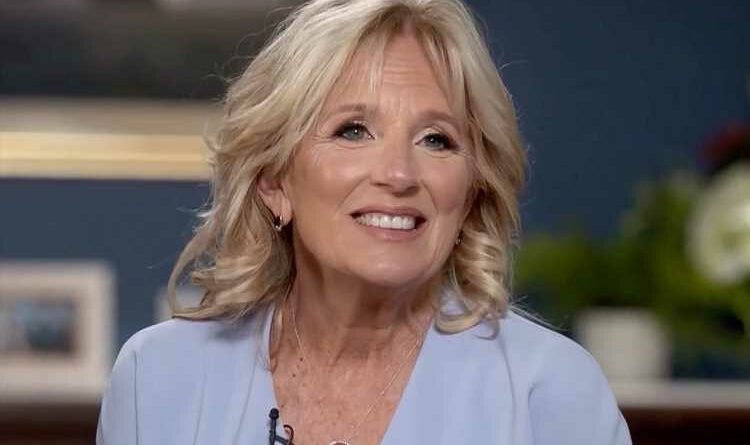 In opening remarks delivered ahead of a virtual forum with leaders in military child education on Wednesday, First Lady Dr. Jill Biden said husband Joe Biden's administration was one who "understands the challenges our military-connected children face and will ensure they get the quality education they deserve."

Dr. Biden used her afternoon speech to tout the importance of community for young people whose parents are in the military. Service-members and their families are a focus for the new first lady, who is continuing to teach while her husband is in the White House.

Speaking about a recent listening session with military-connected teens, Dr. Biden said on Wednesday, "there were moments when the brave faces they wore slipped just a bit," and then she recounted a 2010 conversation she shared with a young woman named Miranda.

"When her father deployed to Afghanistan, her school friends began slipping away … at a conference she met another teenager named Kayleigh, whose dad was also deployed in Afghanistan," Dr. Biden, 69, said. "They both said it felt like finding a soul mate and together they formed a group … called the Sisterhood of the Traveling BDUs [Battle Dress Uniforms] … so other teenagers could find the same kind of community."

Dr. Biden went on to say that another girl she had met had told her that the biggest challenge of military kids was not having a hometown.

"Even after knowing the stories of so many military children, her statement just took my breath away," the first lady said. (Only her opening remarks from the Wednesday afternoon event were open to press.)

Military children, she said, know loss, sacrifice and struggle in the way many other kids simply don't.

"They know loss — whether it's falling out of touch with [a] best friend … or celebrating another birthday without one of the people they love most in the world," Dr. Biden said. "They know fear — worrying they'll have no one to sit with at lunch … and they know sacrifice: how to put their own desires aside for the greater good. They know the cost of security and liberty because their families pay it every day."

As she wrapped up her comments, the first lady drew on her own trials and tribulations as a parent, saying that anyone with a child "can tell you: when your child is suffering, nothing in your world is right. When they hurt, you hurt."

Dr. Biden knows firsthand what it's like to part of a military family: The president's late son, Beau, served in the Delaware Army National Guard, deploying to Iraq in 2008. (He died from brain cancer at age 46 in 2015.)

Last month, with thousands of National Guard in Washington, D.C., to protect the inauguration, the first lady made an unscheduled stop to thank them after her husband was sworn in.

Saying that taking care of America's military kids is "critical to our national security," the first lady said in her Wednesday speech that, "While we may not be able to give them a hometown, we can give them a community that is constant …. we can lift up their experiences and make the burden they carry just a little bit lighter."

Dr. Biden also drew on her time as second lady — when she worked with former first lady Michelle Obama on similar issues — and her work as a teacher, telling the military leaders gathered for the event that "as educators, we can't do our jobs if we don't know what our students are going through." Educators, she urged, need to be better-equipped to understand the needs of students who are connected to the military.

"Our work is far from finished. The Bidens have a saying: If you have to ask for help, it's too late," Dr. Biden continued. "We can't expect military students to ask for help. We need to lift them up so they don't have to."

Before opening the forum to comments from others on the call, Dr. Biden added that she was eager to know what the administration was doing right in its work with military families but also how to correct what they've done wrong.

"I hope you'll tell us when we're getting it wrong … so that we can truly serve the military families who serve us all," she said.

In 2011, when Obama was first lady, she and Dr. Biden launched Joining Forces, a nationwide initiative focusing on the "wellness, education, and employment opportunities" for service members, veterans, and their families.

Speaking about that initiative, Dr. Biden on Wednesday said, "Mrs. Obama and I made a commitment that we wouldn't tell military families what they needed. We would ask them."

Movie theaters are reopening. We asked an expert if it's safe to go

Varney rips Biden for using California as model for US amid COVID-19 pandemic: ‘It’s unsettling’