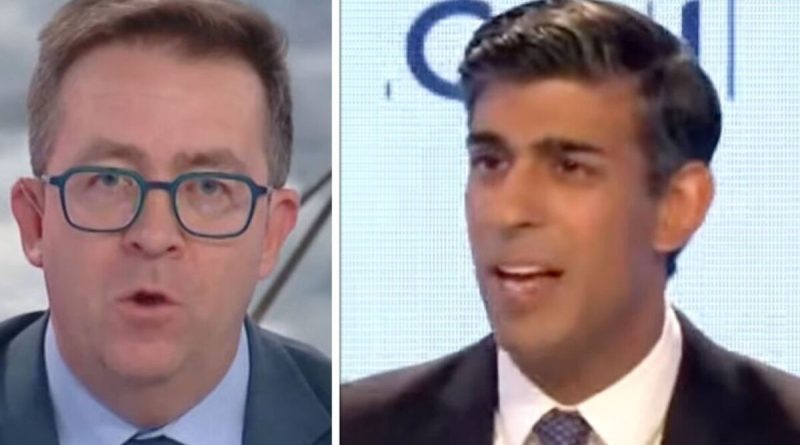 Prime Minister Rishi Sunak has been warned against considering a Swiss-style Brexit deal with the European Union, as it could lead to his demise. Australian Senator James McGrath claimed Rishi Sunak’s term would be shorter than Liz Truss’ 44-day term if he were to go ahead with those post-Brexit arrangements.

Australian Senator James McGrath told Sky News Australia: “There is no way that that will happen.

“If he tries to undo Brexit or do any backdoor manoeuvres, he’ll be a shorter-serving Prime Minister than Liz Truss.

“They’ve certainly got issues over in the UK because remember that Europe is like the kryptonite for Tory Party leaders going back to Edward Heath.

“So there’s big issue at the moment about making sure they’re controlling immigration but also what they do with the Northern Ireland question in relation to how it deals with the Republic of Ireland.

“But there has been some briefing from Downing Street saying: ‘No, no, no. No retreat’.”

Ms Truss failed to outlast a lettuce broadcast by the Daily Stream, which began a livestream of an iceberg lettuce next to a framed photograph of Liz Truss. Her Chancellor’s mini-budget sent shockwaves through Britain’s economy, dropped the pound to all-time low against the dollar and had pension funds come close to bankruptcy.

Rishi Sunak, who took over from her, is now trying to restore trust among foreign markets in a bid to reduce government’s borrowing costs. Reversing most of the measures of his predecessor Kwasi Kwarteng, Jeremy Hunt announced £25billion in tax hikes and £30billion in spending cuts to fill the fiscal hole.

He later acknowledged Brexit is also contributing to Britain’s economic decline but ruled out re-joining the Single Market – a call that has been growing among UK’s businesses, whoch have been facing mounting export costs since 2021.

Despite calls for more economic cooperation with the bloc, Rishi Sunak has ruled out a Swiss-style Brexit deal with the European Union despite reports claiming senior government officials are mulling over that possibility.

Speaking at the CBI annual conference in Birmingham, the Prime Minister said: “Let me be unequivocal. Under my leadership, the UK will not pursue any relationship with Europe that relies on alignment with EU rules. I voted for Brexit. I believe in Brexit. Brexit can deliver enormous benefits and opportunities for the country.”

DON’T MISS:
Sunak warned of ‘biggest risk to Brexit’ as PM urged to step in [REPORT]
Head of CBI calls for ‘fixed-term immigration’ to ‘plug the gaps’  [REPORT]
‘Plan to sneak Britain back into EU by the back door MUST be stopped’ [REPORT]

He pointed to migration as one of the areas in which the UK has benefited from Brexit, saying that “we have proper control of our borders . . . we are in control”.

CBI Director General Tony Danker has urged Rishi Sunak to rethink his post-Brexit immigration plan as Labour shortages are holding Britain’s economy back. He urged leaders to “be honest with people” over the country’s “vast” labour shortages, adding “we don’t have the people we need nor do we have the productivity”.

“First, we have lost hundreds of thousands of people to economic inactivity post Covid,” he said. “And anyone who thinks they’ll all be back any day now – with the NHS under the pressure it is – is kidding themselves.

“Secondly, we don’t have enough Brits to go round for the vacancies that exist, and there’s a skills mismatch in any case. And third, believing automation can step in to do the job in most cases is unrealistic.”

The OBR forecasts that Brexit will reduce UK productivity by 4 percent in the long run.