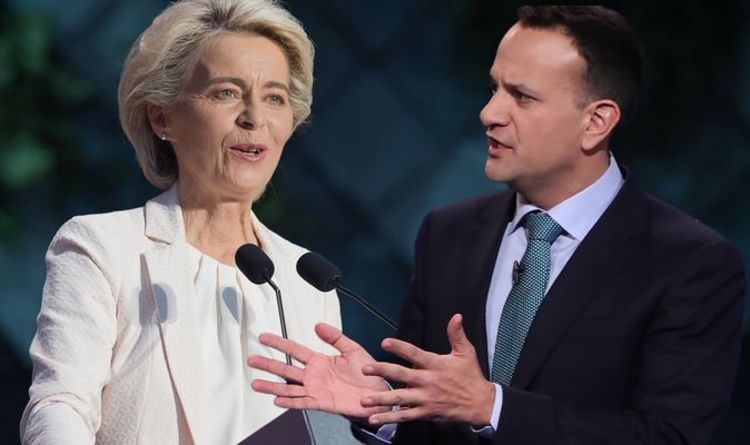 Jamie Bryson, an author and commentator, has been very vocal in the discussion over the triggering of Article 16 and the Northern Ireland Protocol. Mr Bryson wrote a book entitled ‘Brexit Betrayed – Writings From the Referendum To The Betrayal Act’.

In this book, according to his Twitter, Mr Bryson argues the “betrayal of NI has its roots in the Belfast Agreement & explores how the Brexit deal undermines sovereignty of the UK”.

But speaking to Express.co.uk, the activist believed that the people of Northern Ireland will not tolerate the current situation which they are facing due to the Protocol for much longer.

Mr Bryson told Express.co.uk: “There are plainly serious societal difficulties in Northern Ireland, both in relation to instability within the political institutions, but there’s also a tinderbox on the streets which has thankfully not yet exploded.

“The only way to diffuse that narrative is to remove from the EU and Irish Government the spoils of their threats, and that means the Protocol must go.

“I am not encouraging this message, but in my view it’s a very real reflection of many people’s views and I can’t imagine loyalist communities will tolerate this ongoing subjugation in an economic United Ireland much longer.

“So we need political action to restore the leave and stability we all want to see in Northern Ireland.”

This warning comes as the US launched a fresh attack at the UK over their handling of negotiations regarding the Northern Ireland Protocol.

A statement from the US read: “The Northern Ireland Protocol was a significant achievement during the volatile Brexit process, and its full implementation is critical for ensuring Brexit doesn’t undermine decades of progress toward peace on the island of Ireland.

“The Good Friday Agreement and broader peace process took patience and time to build, with good faith contributions from the communities in Northern Ireland, the United States, the United Kingdom, Ireland, and others.

“However, peace can unravel quickly.

“In threatening to invoke Article 16 of the Northern Ireland Protocol, the United Kingdom threatens to not only destabilise trade relations, but also that hard-earned peace.

“We call on the UK to abandon this dangerous path, and to commit to implementing the Northern Ireland Protocol in full.”

This was met by a reaction from Twitter users about how the UK should respond to the threats from the US.

“No wonder Frost c***ed himself and started backtracking on Article 16.”

Paul Woodcraft tweeted: “In the event of a hard border on the Island of Ireland, I hope that the USA will be willing to take control as neither side would be prepared to cause violence.

“Hopefully all sides experiencing the difficulties in NI would be amenable to supporting Reunification in Border Poll.”