So far, this election — which pits Stansbury, a state representative with a science background, against Republican state Sen. Mark Moores — seems to be shaping up the same way. Early-voting numbers have been strong for Democrats, who have cast 58% of the ballots in the race so far, according to the office of New Mexico’s secretary of state.

Overall turnout in the district has been low, according to the secretary of state’s office, and Democrats watching the race said it’s possible fewer than a third of the district’s registered voters will bother to show up. So why did the party bother dispatching second gentleman Doug Emhoff to the district for campaign events on Thursday and Friday? And why are political operatives on both sides of the aisle keeping a close eye on a sleepy race?

In many ways, the lack of interest in the race is the most telling thing about it. After four years of high-energy, high-stakes political combat during Trump’s presidency — a period when congressional special elections in Georgia and Pennsylvania became nationally watched showdowns — the relatively low-profile battle in New Mexico could signal a slightly cooler era of political involvement.

And the race’s location, a plurality-Hispanic district centered around a city with high crime, also provides a renewed look at some of the weaknesses in the Democratic coalition exposed by the 2020 elections.

There are a whole host of reasons not to read too much into special election results. (They’re called special elections for a reason.) And a low-turnout special election on the day after Memorial Day is far from a perfect benchmark. Still, here’s why Tuesday’s contest feels like it matters.

It is one of the longest-lasting trends in American politics: The party that controls the White House watches helplessly as its partisans lose interest in elections, leading to losses during the midterm elections.

A special election earlier this month in Texas demonstrated the pitfalls for Democrats: While the district was enticing on paper — Trump won it by just 3 percentage points in November — it was also unlikely to exist after redistricting, and Democrats failed to unite behind a single candidate. As a result, Republicans took the top two slots in the first round of voting, and Democratic chances of winning slipped away.

The Democratic Party seems determined to avoid repeating that mistake here. Several national figures and groups have endorsed Stansbury, including Massachusetts Sen. Elizabeth Warren, the gun control group Giffords and EMILY’s List. This week, Biden provided an endorsement of his own, and Emhoff followed on Thursday and Friday with his first political trip as second gentleman.

“It’s crunch time. Don’t look at the polls. Don’t look at anything. Act like we’re down. There’s a sense of urgency, right?” Emhoff said at a rally, according to the Associated Press.

Stansbury acknowledged that it was difficult to get voters focused outside of the normal election cycle. She said her team had built the “largest field operation this congressional district has seen in over a decade.”

“It’s just hard to reach everyone and to inform everyone about the election, what’s happening, who the candidates are,” she told HuffPost earlier this month, noting that campaigns only had about eight weeks to reach voters after the two parties’ state central committees picked nominees. “We are not taking anything for granted.”

Veteran Democratic pollster Stanley Greenberg wrote in a mid-May memo that a survey of battleground states and districts had left him “surprised by how much Donald Trump’s loyalist party is totally consolidated at this early point in its 2022 voting and how engaged it is.”

But that energy has only been sporadically turned into electoral action: While GOP turnout was high in Texas, it has clearly lagged Democratic turnout in New Mexico.

And while Democratic special election candidates in 2017 raised record-breaking sums of small-dollar money online, Moores has only raised $73,000 in donations less than $200 as of the latest campaign finance reporting deadline. Stansbury has raised more than $300,000 in small-dollar donations.

Moores’ campaign has focused extensively on Stansbury’s initial support for the BREATHE Act, an activist-crafted piece of legislation aimed at reducing federal support for police and prisons. In a Moores television ad, a narrator calls it “the most dangerous legislation in America” and says it amounts to support for defunding the nation’s police departments.

Such attacks have occasionally left Stansbury on her heels in a city that had relatively high crime rates even before the pandemic caused a spike in violent shootings nationwide. Her campaign has responded by noting her work to support law enforcement funding in the state legislature.

“The Republican nominee is trying to reframe this race around public safety as a scare tactic,” Stansbury said, while acknowledging that public safety is a major issue in the district. “But I think it is largely a political distraction from the bigger issues around the economy, education, investments in our community.”

A shock GOP win in the district — or even a perceived underperformance from Stansbury — is likely to restart the intra-Democratic political infighting around activists’ calls to defund the police.

A Test Of The Hispanic Vote

New Mexico’s First Congressional District is 49.4% Hispanic or Latino, according to census data. Unlike many majority- or plurality-Hispanic districts nationally, it did not swing toward Trump in 2020 relative to 2016. But national Democratic leaders are focused on improving Biden’s standing with Hispanics, and public polling suggests that his approval ratings among Hispanic voters have ticked up since the start of his presidency.

Moores is Hispanic, but the Democrats’ state central committee chose Stansbury — an “Anglo,” in the political parlance of New Mexico — over a number of Hispanic candidates. Stansbury has closely tied herself to Biden, fully embracing his agenda and highlighting Moores’ opposition to the Biden-backed coronavirus relief package Congress passed earlier this year.

While New Mexico is not a key state for the president’s long-term political fortunes, Democrats would be pleased to see Stansbury excel in majority-Hispanic precincts there.

‘We must have action now on desperate refugees’ 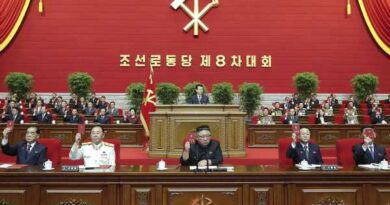