Terrorist group Al-Qaeda has called on its followers to "wage jihad" at the World Cup in Qatar.

In comments reported by journalist Wassim Nasr, the group said it was time to wage physical "jihad" in the face of the "invasion" of Qatar by the World Cup which they claim is designed to "destroy Muslim communities and values".

Chillingly, the group appeared to advocate violence towards people travelling to the country.

"Their acts are alien to our conservative societies and our Muslim peoples. Only they [Muslims] can do their jobs by stoning them," the translation of the statement read.

The murderous organisation, pointing its finger at the West, said: "They are now bringing down other types of cultural invasion, another type of destructive intellectual war.

"One of their most important goals is to revive the heritage of lots of people in the region by reviving pornography and normalizing with the vice of homosexuality, while working hard to restore as much as possible of the leftover "pornographic" historical monuments of the Red Flag in Mecca, and to revive the national heritage of those who have taken them."

The terrorist group also said Middle Eastern countries were responsible for letting in an "invasion" of the Arabian Peninsula by "Zionist-Crusaders".

Yesterday (November 19) separate comments from one of Al-Qaeda's regional branches urged Muslims around the world to shun the event.

Taking particular aim at the 2022 World Cup in Qatar, the group condemned the nation for for allowing Israeli citizens, LGBTQ+ people, and other individuals who "target Muslim values" to come to the Arabian Peninsula.

They described the tournament, widely considered the biggest international sporting competition in the word, as a "pornographic campaign against Mohamed".

The comments by the regional group stopped short of promoting terrorist attacks and killings at the tournament, but this latest statement seems to advocate violence.

World Cup organisers have said that everyone, no matter their sexual orientation or background, is welcome to the country to watch the football, but many fans have been put off from going.

The nation recently did a last minute U-turn on the serving of alcohol meaning no alcohol will be sold as stadiums except those who have hospitality packages.

Meanwhile, women have been advised not to wear clothing that reveals their shoulders, midriff or knees with FIFA website advising fans to respect the laws of the land. 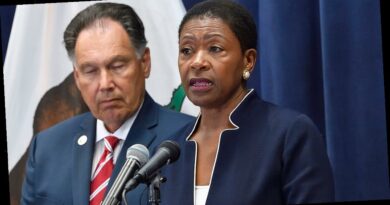 Another California Democrat is accused of breaking coronavirus orders

Modeling shows coronavirus pandemic in US could be over by November

Tory activists petition for an ’emergency’ meeting to dislodge May