Home » World News » Albanese: ‘I’m not getting ahead of myself’ on China

Bangkok: Anthony Albanese has declared he is not getting ahead of himself on Australia’s improved relationship with China as he concluded a hectic nine-day trip through Asia that peaked with his breakthrough meeting with Chinese President Xi Jinping.

The prime minister also vigorously defended the AUKUS pact, declaring it would promote “global security and peace” after French President Emmanuel Macron doubled down on his criticism of Australia’s plan to acquire a fleet of nuclear submarines from the United States or United Kingdom. 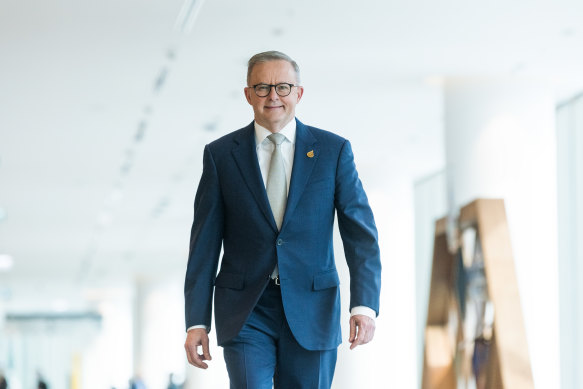 However, Philippines President Bongbong Marcos appeared worried about AUKUS’ implications of for the region during his meeting with Albanese at the Asia-Pacific Economic Cooperation (APEC) forum in Bangkok on Saturday.

“We are outsiders looking in,” Marcos said asking: “What part do we play?”

Albanese also sought to calm angst in Taiwan after he suggested he opposed the self-governing island’s push to enter a sweeping regional free-trade pact because it was not a recognised nation state.

Highlighting the global tensions that have cast a shadow over back-to-back ASEAN, G20 and APEC summits, the latter ended without a traditional group photo of the leaders in the traditional dress of the host nation.

Sources said the Thai government decided not to stage the “family photo” because of logistical difficulties and concerns among some nations about posing alongside a representative of Russian President Vladimir Putin over his war on Ukraine. 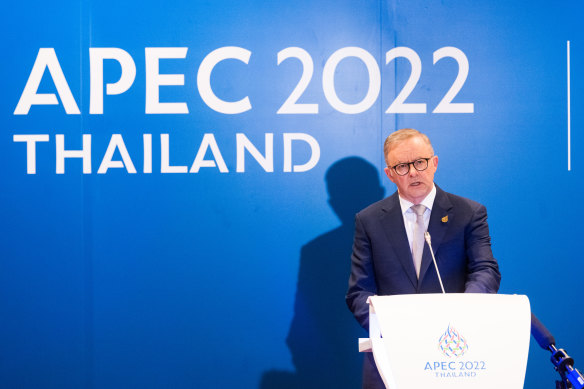 At past APEC summits, world leaders have posed together wearing Peruvian wool shawls in Lima, Drizabone coats in Sydney and Chilean ponchos in Santiago.

Some leaders looked uncomfortable in Hanoi in 2006 when they wore Vietnamese “ao dai” tunics which are most commonly worn by women.

New Zealand Prime Minister Jacinda Ardern emerged from a 50-minute meeting with Xi in Bangkok with an invitation to start working on dates to visit Beijing, reflecting the fact her nation’s relationship with Beijing has been far less fractious than Australia’s over recent years.

Albanese, who had a 30-minute meeting with Xi at the G20 in Bali and a separate discussion with Chinese Premier Li Keqiang in Phnom Penh, Cambodia, said his interactions with Chinese leaders over the past week were the “first steps” to improved relations with China.

“I’m not getting ahead of myself,” Albanese said when asked whether he was hoping for an invitation to Beijing.

“We will continue, arising out of this week’s progress, to take steps forward together.”

He added: “It is not a good thing there had been no discussions at a leaders’ level with our major trading partners. Now it’s good that that dialogue has occurred.”

Albanese said he believed AUKUS would promote “the interests of global security and peace” after Macron predicted the pact “will not deliver” for Australia.

Macron, still angry over the cancellation of a $90 billion French submarine contract, earlier said Australia had entered into a “nuclear confrontation” with China by seeking to acquire nuclear-powered submarines.

“We enter into the AUKUS agreement positively. We are positive about the outcome,” Albanese said, adding he had progressed details in meetings with US President Joe Biden and UK Prime Minister Rishi Sunak over the past week. 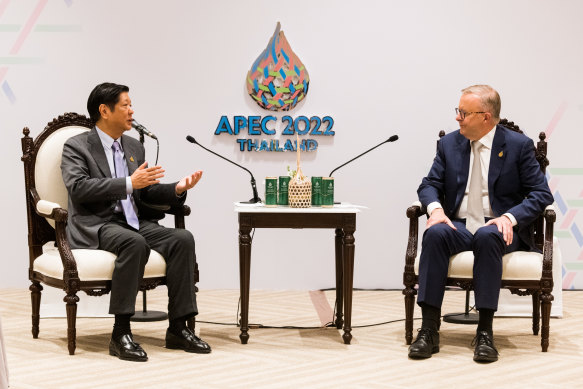 “What part do we play,” asked Philippines President Bongbong Marcos in his bilateral meeting with Prime Minister Anthony Albanese.Credit:James Brickwood

Asked whether he would support Taiwan joining the 11-nation Comprehensive and Progressive Agreement for Trans-Pacific Partnership (CPTPP) free-trade deal, Albanese said on Thursday it was “a relationship between nation states that are recognised”.

The pact makes clear, however, that economic territories such as Taiwan are eligible for membership.

Albanese tweaked his language on Saturday after criticism from Taiwan and the Coalition, saying “applications are dealt with on consensus for economies applying to join the CPTPP” and would be judged on their merits.

Taiwan’s Ministry of Foreign Affairs said it was glad the government had clarified its position and was open to the island joining the pact.

A spokeswoman for Taipei’s Australian Office – its de facto embassy – said emphatically: “There is no legal uncertainty concerning the status of Taiwan to apply for CPTPP membership.”

Thomas Cook bosses set to be dragged in front of MPs 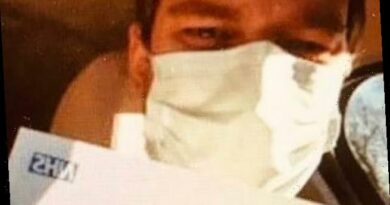