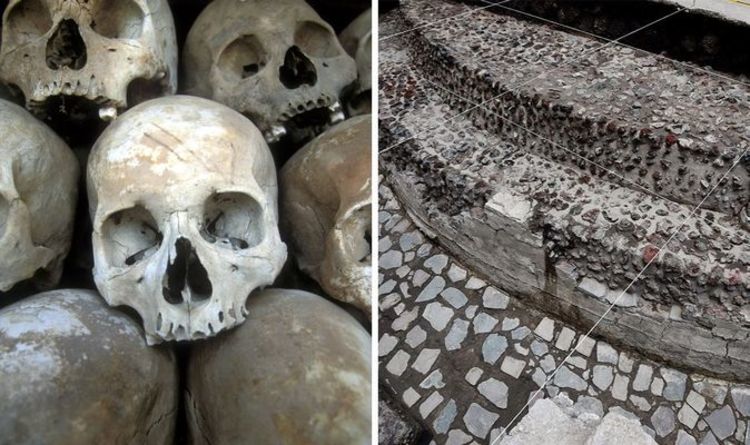 Aztec house with wall of SKULLS explored by researchers

The Aztec civilisation, as well as other ancient peoples from the Americas, have long eluded archaeologists. They were among some of the most advanced human beings of their time in both fields of science and medicine. Yet, their once great cities no longer exist.

Various items and artefacts have been found in the capital over the years.

A pre-hispanic temple was also found nearby.

In playing the game, researchers believe the Aztecs played-out a representation of the daily battle between the sun and the darkness of night.

Although archaeologists have also suggested that they played the sport for the sheer pleasure of it.

The Spanish were fascinated by the game, for in 1528, they took Aztec ball players to Spain to give a display to their king, Charles V.

Alongside the ball court was a more sinister finding, chilling evidence of “gruesome human sacrifice”.

The publication WatchJoJo noted: “There were signs that the sport involved gruesome human sacrifice, even of children.”

It continued: “Among the finds of the site were no less than 32 separate racks of male neck bones, the vertebrates were found heaped together, adjacent to the ball court.”

Describing the find, archaeologist Raul Barerra, said: “It was an offering associated with the ball game just off the stairway.

“The vertebrates or necks surely came from the victims who were sacrificed or decapitated.”

Only part of the court’s structure remains – a staircase and a portion of the stands.

Archaeologists estimate the original court was about 50 meters (165 feet) long, while the temple is a giant semi-circle perched atop an even larger rectangular base.

The whole thing once measured some 34 meters across and four meters high.

It wasn’t an isolated discovery, with evidence for human sacrifice found elsewhere in the city since.

A month after the ball court was found, a tower of human skulls was unearthed, the crania of women and children among the hundreds of items embedded in the structure.

More than 650 skulls were recovered, caked in lime.

Thousands of fragments were also found in the cylindrical edifice near the site of the Templo Mayor, one of the main temples in the Aztec capital Tenochtitlan.

The tower is believed to form part of the Huey Tzompantli, a massive array of skulls that struck fear into the Spanish conquistadores when they captured the city under Hernan Cortes.

Traditionally, archaeologists believed the severed heads were of captured warriors.

Yet, the appearance of women and children completely turned this idea on its head.

Rodrigo Bolanos, a biological anthropologist investigating the tower find, told The Guardian: “We were expecting just men, obviously young men, as warriors would be, and the thing about the women and children is that you’d think they wouldn’t be going to war.

“Something is happening that we have no record of, and this is really new, a first in the Huey Tzompantli.”

Iraq offers to mediate in crisis between the US and Iran