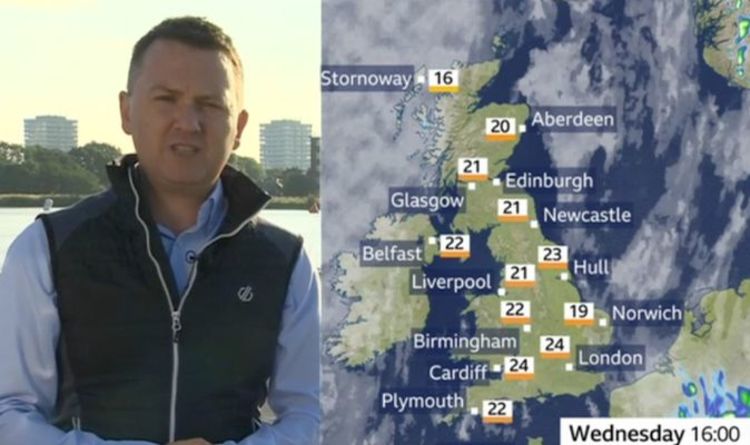 Speaking to BBC Breakfast, weather presenter Matt Taylor told viewers the UK is set for more hot weather on Wednesday as temperatures will continue to rise. But he warned there is an “outside chance” of rain for northern and central areas where cloud will roll through later in the day. Wednesday will see highs of 25 degrees in southern areas before rocketing to a sweltering 27 degrees on Friday and further as we head into the weekend.

Mr Taylor said: “After that stormy start to the week, more in the way of sunshine, more in warmth is set to come our way.

“There will some cloudier moments, it won’t be blue skies all the way.

“And it is all due to that area of high pressure down to the southwest of us at the moment, it is creeping ever closer.”

But he warned weather fronts in Northern areas of the UK will bring some patchy rain and cloud to Northern Ireland and parts of southwest Scotland.

JUST IN Tory civil war: Baker hits out at party and demands change in attitude to taking the knee

He added: “But for most it’s a dry day there will be some long spells of sunshine.”

The presenter said how there will be a “bit of a breeze” blowing through eastern areas of the UK.

While there is also an “outside chance” of showers in central England.

Wednesday will see temperatures rise to highs of 24 degrees celsius in London, 23 in Hull, 22 in Birmingham, 21 in Newcastle and 20 in Aberdeen.

But the BBC presenter warned of a “mild and muggy night” on Wednesday evening.

He added: “Into this evening and overnight the cloud in western Scotland and Northern Ireland with a little bit of patchy drizzle will push across the rest of Scotland…

“Northern Ireland and eventually into the northwest of England.

“For tomorrow the biggest difference for Scotland and Northern Ireland will be a bit more sunshine once again.”

Thursday will see highs of 25 degrees in Cardiff, 24 in Edinburgh, 23 in Cardiff, 23 in Birmingham and 20 in Aberdeen.

Mr Taylor added: “By the time we get to Friday sunshine will develop more widely once again, long sunny spells for most as we go through Friday, and temperatures will be starting to rise.”

He concluded: “Those temperatures will climb even further as we head into the weekend, this weekend we could see temperatures of maybe 27 even 28 degrees!”

Trump tweets at North Korea's Kim, tells him to 'get the deal done' 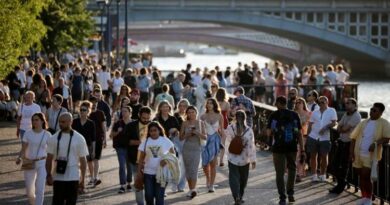 Paper from 1972 predicted collapse of society by 2050 on track, new study suggests