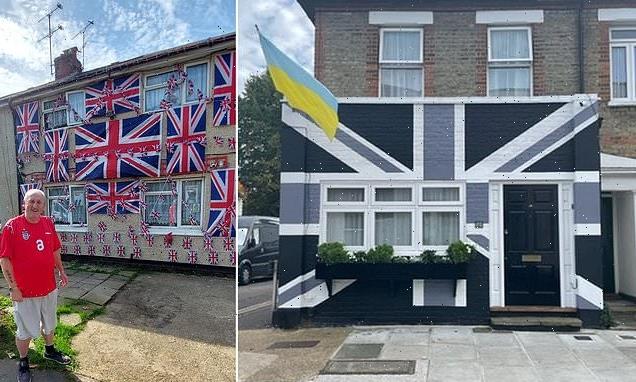 Britons decorate their homes in tribute to the Queen: Royal superfan covers house in 150 Union Jack flags and family paint their home black as nation prepares to say final farewell to Her Majesty

Brits are decorating their homes in tribute to the Queen as the mourning nation prepares to say a final farewell to Her Majesty.

A royal fan has covered his house in almost 150 Union Jack flags to mark the death of the Queen – and says he is not stopping there.

Are you decorating your house to pay tribute to the Queen?

Paul Bibby, 57, has even more flags on order ahead of the monarch’s funeral on September 19, and will add them to the exterior of his house in Chelmsford, Essex.

Meanwhile a family from Richmond-upon-Thames who painted a massive Union Jack flag on their home ten years ago for the Diamond Jubilee have repainted it black.

The Tate family painted their house in the patriotic colours of red, white and blue to win the best decorated house for a Jubilee street party.

But after the passing of Queen Elizabeth II, husband Alex, 52 and wife Vivienne, 50, changed the colours on their Teddington home to tones of black, white and grey as a mark of respect.

The family have even added white and green flowers at the front of their garden to pay tribute to the Queen. 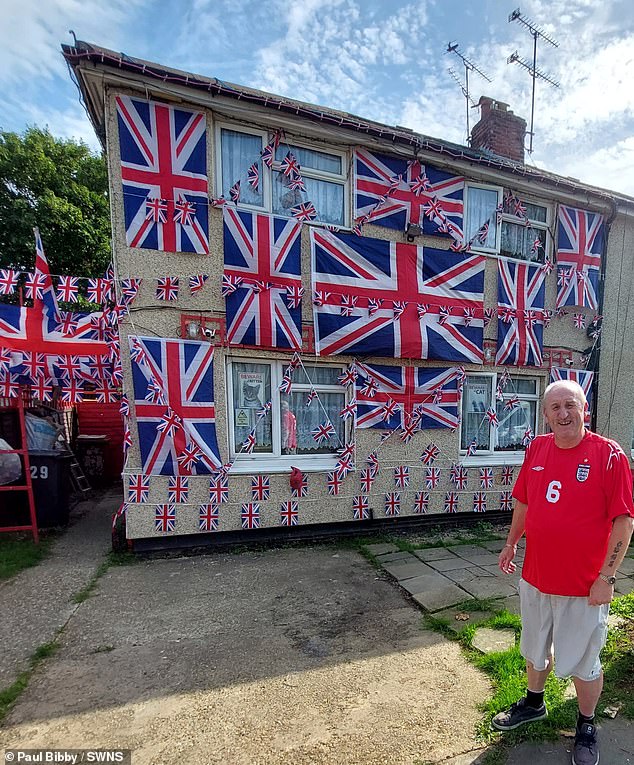 Royal superfan Paul Bibby, 57, has put up 150 flags on the exterior of his home in Chelmsford, Essex 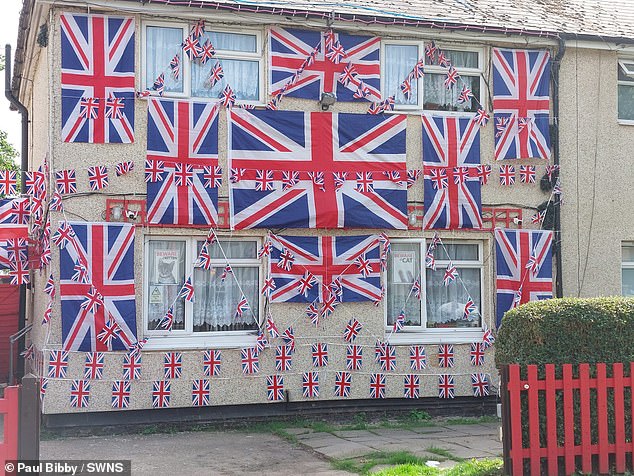 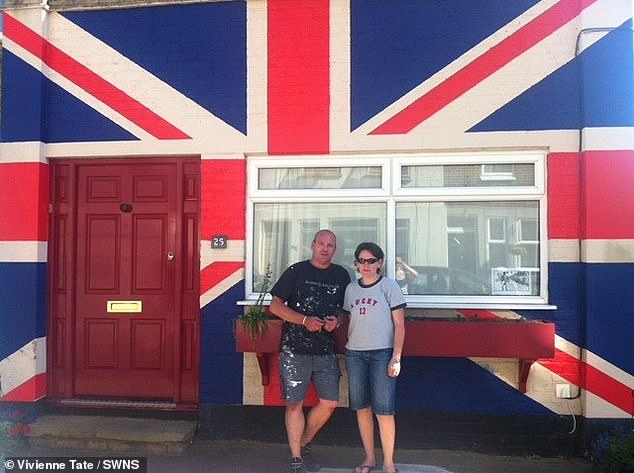 The Tate family painted their house in Richmond-upon-Thames in the patriotic colours of red, white and blue to win the best decorated house for a Jubilee street party 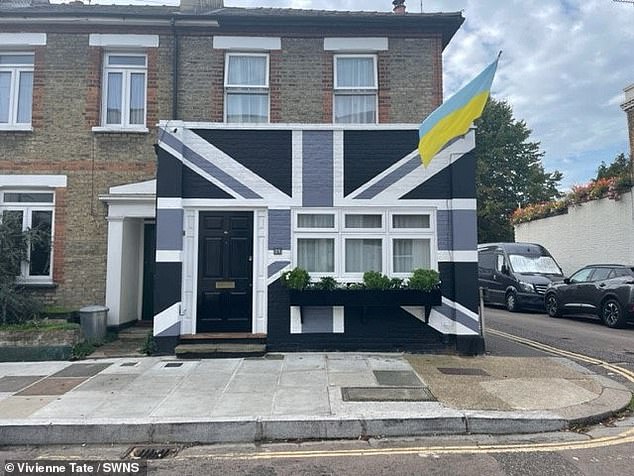 After the passing of Queen Elizabeth II, husband Alex, 52 and wife Vivienne, 50, changed the colours on their Teddington home to tones of black, white and grey

Mr Bibby regularly covers his property ahead of big national events, such as major football tournaments.

Paul, a carer, said he wanted to celebrate the life of the late Queen and thought flags would be a touching tribute.

He said: ‘I initially was not sure if I would put up a display, but I thought it would be a nice symbol to recognize the life of the Queen.

‘The whole process took about three hours, and at my age was quite tiring, especially on the knees. As soon as I stopped my whole body seized up.

‘I’ve become quite well known in the area because I often put up loads of England flags in support of England football when we’re playing.

‘When the Queen passed away though I just thought it would be my own mark of respect for her.

‘I’m very sad that she’s left us, I’m very proudly English and British, and a big supporter of the monarchy, so it felt an appropriate thing to do.

‘She had a fantastic reign, and it’s strange to think that she was Queen when I was born and nearly sixty years later she has only just passed.’ 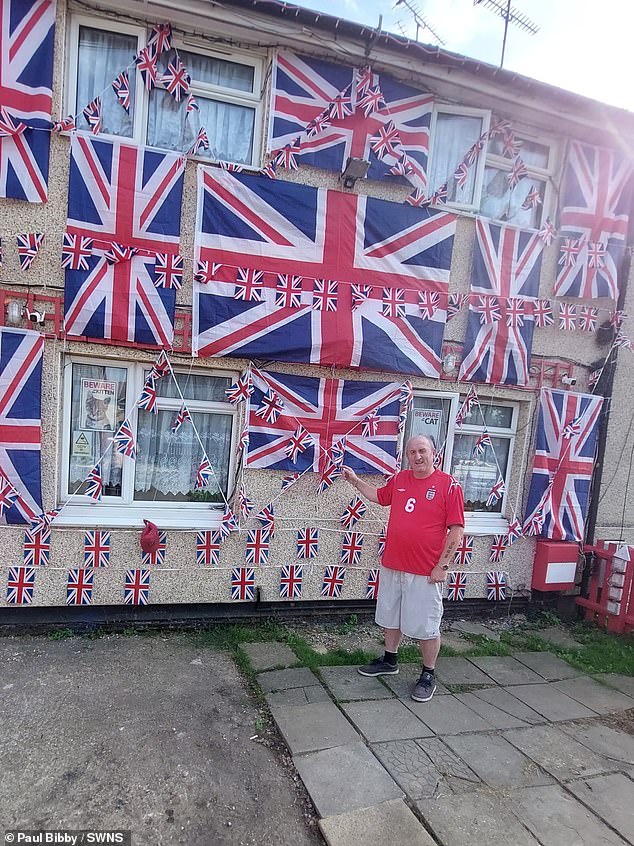 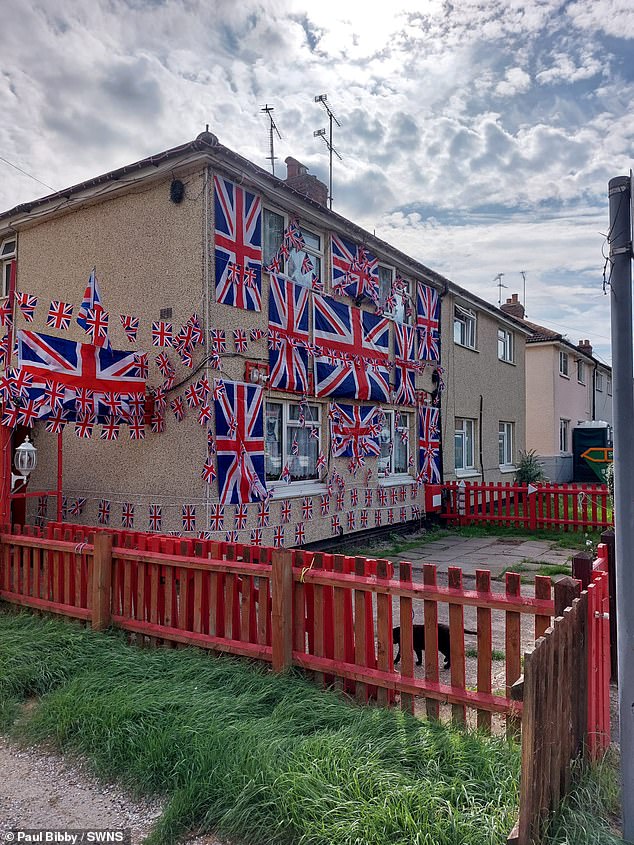 ‘I initially was not sure if I would put up a display, but I thought it would be a nice symbol to recognize the life of the Queen,’ Mr Bibby said

Paul says he expects that Charles will be a good King, however still feels sad that the late Princess Diana never had the chance to become Queen.

He added: ‘I like Charles, I think he will be a good King. I just think it’s a shame that we could have had Queen Diana.

‘It’s just strange to think they’ll have to change all the money now and the symbols everywhere.

‘I expect I’ll keep up the flags until the Queen’s funeral. I’ll put them up again too for the coronation – but it depends how long it is until that happens.

‘England are playing next week so I’ll have to put the England flags back up again soon.’ 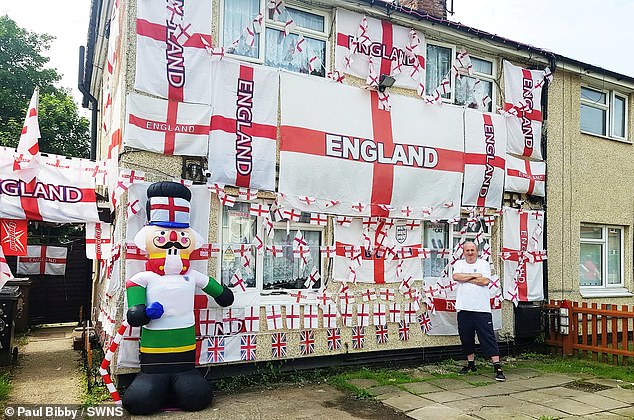 Mr Bibby regularly covers his property ahead of big national events, such as major football tournaments

The Tate family pained their home as a mark of respect to the Queen who ‘touched many people across the world.

Mrs Tate, an executive assistant, said: ‘We always had a plan that when the Queen passed away we would change the house colours as a mark of respect.

‘We thought this would allow us in the future when Charles’ coronation happens – to change it back to a normal looking house!

‘But I must say we are loving the new black door.’

The mother-of-one said she was helped by nine neighbours to do the paint job on Sunday. The poignant transformation took them 24 hours.

She said: ‘I think the Queen’s passing is a huge historical significance – she’s touched so many people across the world. 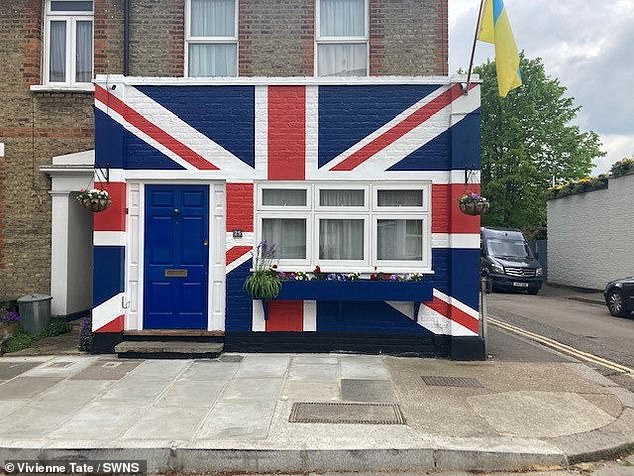 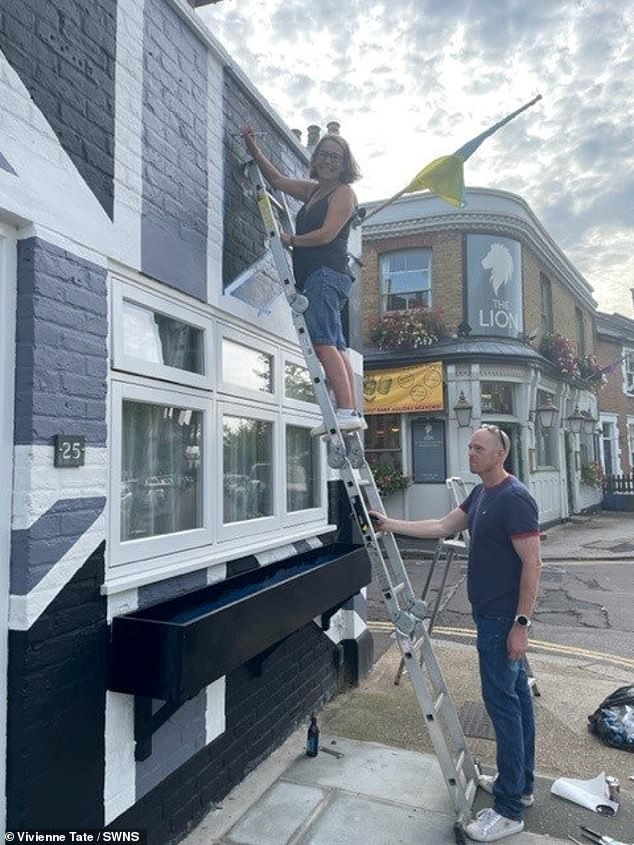 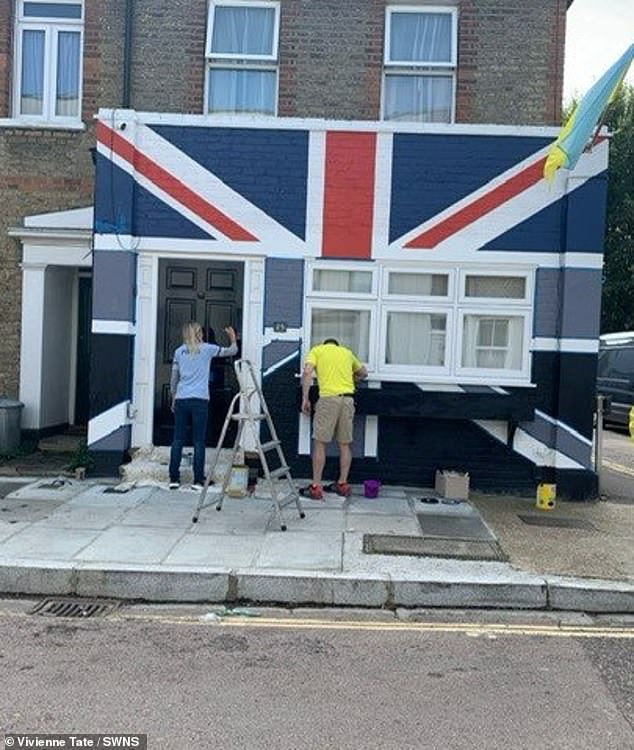 ‘We are incredibly lucky to have some great friends and neighbours – so as a mark of respect in our community, we decided to change the colours to show how grateful we are for all that she has done for us.

‘It was really lovely because, despite it being very sad, everyone came together and felt a part of something.

‘We had lots of people walking past the house stop to chat too, so the response has been sad but very rewarding.’

The mum explained how the family went the extra mile when asked to decorate their house back in 2012.

She said: ‘We had moved into the house 18 months before and it was originally an off-cream colour but you could tell it hadn’t been painted in years.

‘So when we had a decorate your house competition – not that I’m competitive at all – I remember having a look at the front of the house and saying to Alex, ‘doesn’t it look like a flag?”

Mrs Tate admitted the excuse luckily ‘forced the family to repaint the home’ – but other notable British events, like the Olympics and the Golden Jubilee, made them keep it.

Alex, who works in the film industry, added: ‘The plan was to convert the house back but for one reason or another it didn’t happen.

‘So we are going to keep it like this for a while then turn it normal again – finally.’

**Are you decorating your house to pay tribute to the Queen? Email [email protected]**

Ukraine parliament votes to strip lawmakers of immunity from prosecution