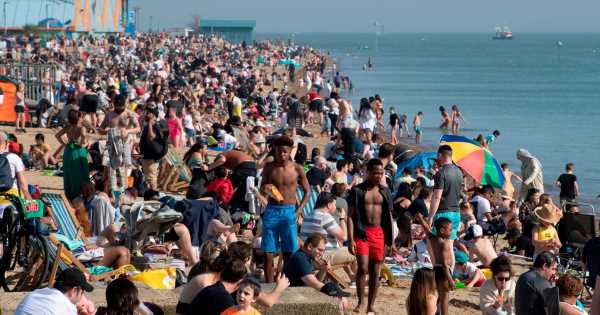 Britain basked in its hottest March day in more than half a century as people ignored police warnings to ram beauty spots.

The heatwave coincides with the relaxation of coronavirus lockdown regulations on Monday, and armed police were forced to attend a park in Leeds while an impromptu beach party took off in Brighton.

Pictures show beaches, parks and promenades packed in cities and towns across the country as the mercury reached a sweltering 24.5C – the warmest March day since 1968

The high temperature was hit in Kew Gardens, London, according to the Met Office. The mark in 1968, when the temperature rose to 25.6C, was in Mepal, Cambridgeshire, the hottest ever recorded.

Met Office forecaster Alex Burkill said it is a "possibility" that Wednesday will see a new high mark for March with temperatures expected to reach around 25C in London and the south-east.

Health Secretary Matt Hancock tweeted a desperate message urging sun-seekers to stay cautious in the continuing fight against Covid-19 despite the hot weather.

He wrote: "Let's enjoy the sun but let's enjoy it safely. We have come so far, don't blow it now."

Coronavirus lockdown restrictions were relaxed for the first time in almost three months on Monday, meaning people can meet outside in groups of up to six or two different households and most were abiding by the regulations.

The clean-up operation began in earnest on Wednesday morning after pictures showed public spaces covered with litter, bottles and cans dumped by people from the previous night's party.

A dispersal order was put in place in Nottingham on Tuesday after large crowds gathered in a city park the day before.

It has led to a "booze ban" with city councillor David Mellen saying alcohol would be seized from people entering parks.

A number of tourism agencies pleaded with the public to exercise caution.

Visit Cornwall said non-locals should "hold off on your Cornish dreams for a bit long," Cumbria Tourism begged people to "follow the guidance". and Visit Devon urged sunseekers to only make a trip when it is "safe and legal".

Although the government has dropped the 'stay at home' slogan, they still do not want people travelling too far for non-essential trips.

Police in Leeds descended on a packed park after reports of a stabbing but West Yorkshire Police found no-one injured after searching with officers and a helicopter.

In Brighton, celebrations continued well into the evening with beachgoers erupting into an impromptu party with flame throwers as huge crowds watched on.

Among the most-packed sites in England was Woodhouse Moor in the Hyde Park area of Leeds, with hundreds of people flocking to the site.

One local resident complained: "There's hundreds here – literally hundreds. People have barbecues going on. It's really frustrating, to be honest.

"I get it, it's 20C and people want to enjoy the weather, but we're literally a few weeks away from lockdown ending.

"Can they not just wait? It's been busy since around 12pm, but within the last hour or so, it's become rammed full."

Met Office meteorologist Steve Keates said: 'It's an exceptionally warm spell of weather with potential for some records to be challenged."

Temperatures are expected to drop over the Easter bank holiday weekend.

Forecasters predict they will dip to around or even below the seasonal average of 12C over the long weekend, which begins this Friday, with widespread overnight frosts a possibility.