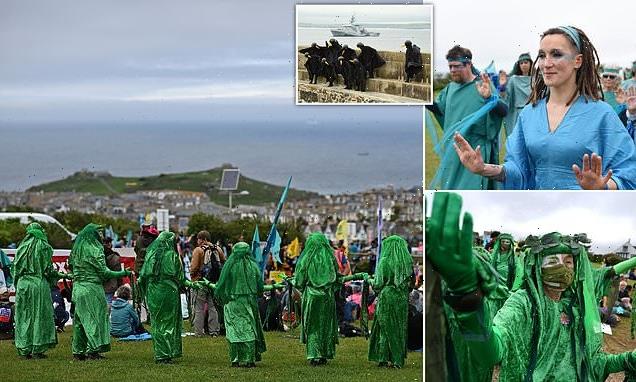 Extinction Rebellion have started a G7 protest march with 500 demonstrators gathering in a Cornish seaside town to urge world leaders to respect the climate.

Campaigners paraded from St Ives Leisure Centre to the high street, escorted by police who redirected cars en route, in the first of a series of demonstrations the group is holding throughout the three-day event in nearby Carbis Bay.

Extinction Rebellion says the protests are in response to G7 nations’ ‘failure to respect the global climate commitments they made in Paris in 2015’ and ‘to urge the leaders meeting at Carbis Bay in Cornwall to act immediately to address the climate and ecological emergency’.

Those living in St Ives stood outside and took photographs of the event as protesters played drums and chanted ‘act now’, ‘sound the alarm’ and ‘Extinction Rebellion’.

Some campaigners wore blue gowns and veils and moved through crowd in a flowing motion, which they said represented the threat climate change has on marine life. 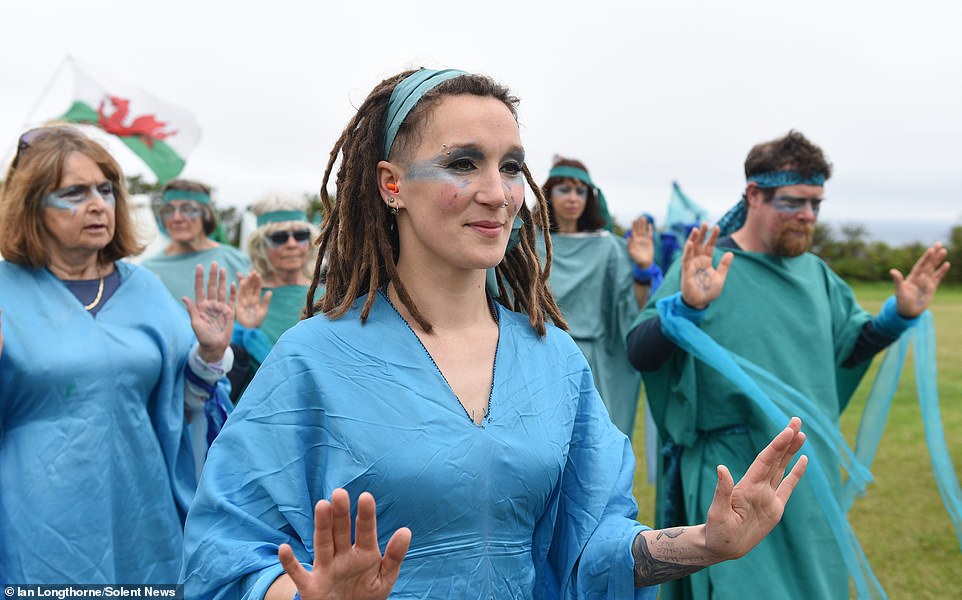 Campaigners paraded from St Ives Leisure Centre to the high street, escorted by police who redirected cars en route, in the first of a series of demonstrations the group is holding throughout the three-day event in nearby Carbis Bay 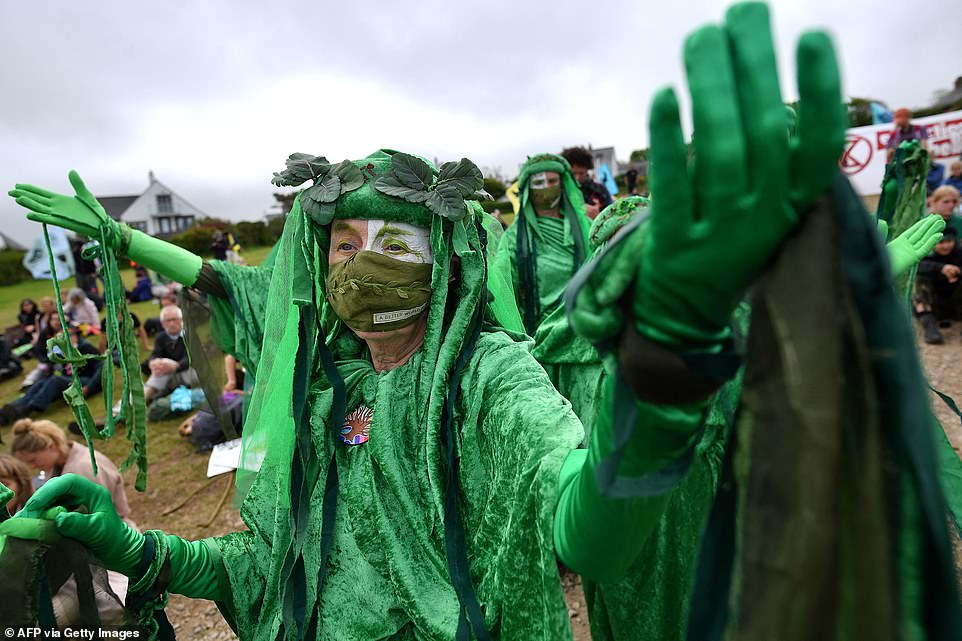 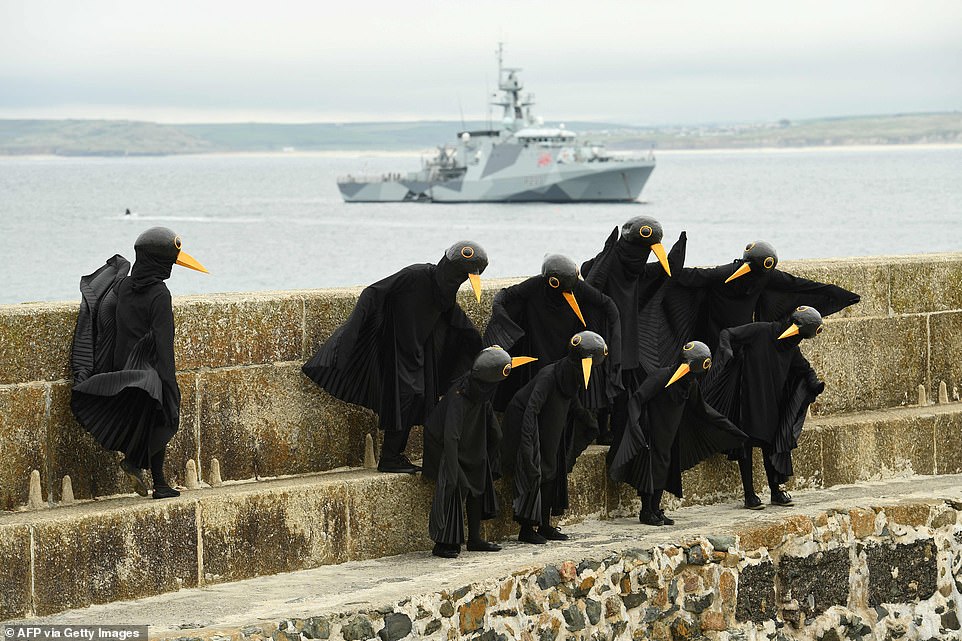 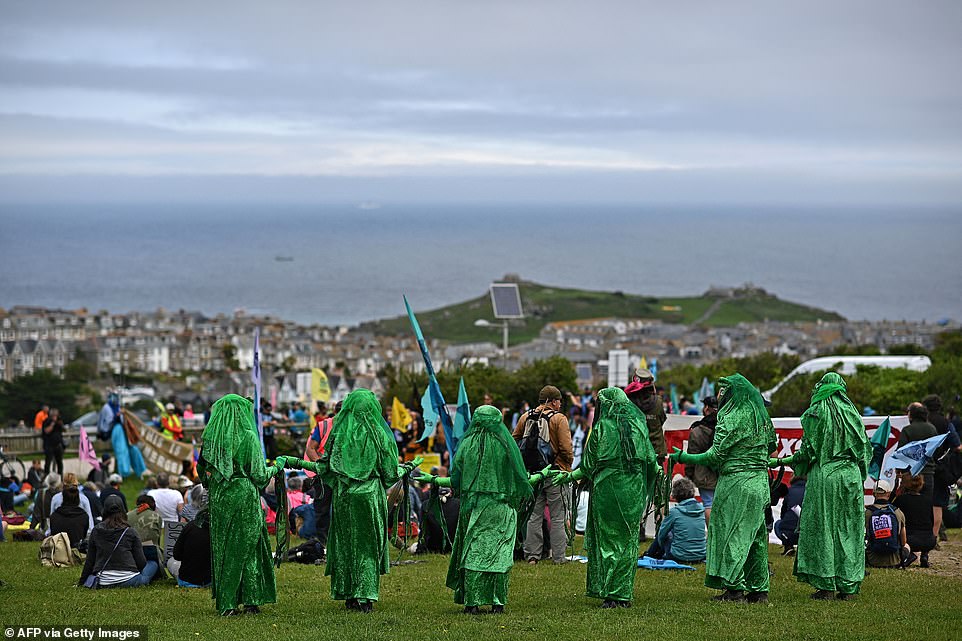 Some campaigners wore green gowns and veils and moved through crowd in a flowing motion, which they said represented the threat climate change has on marine life 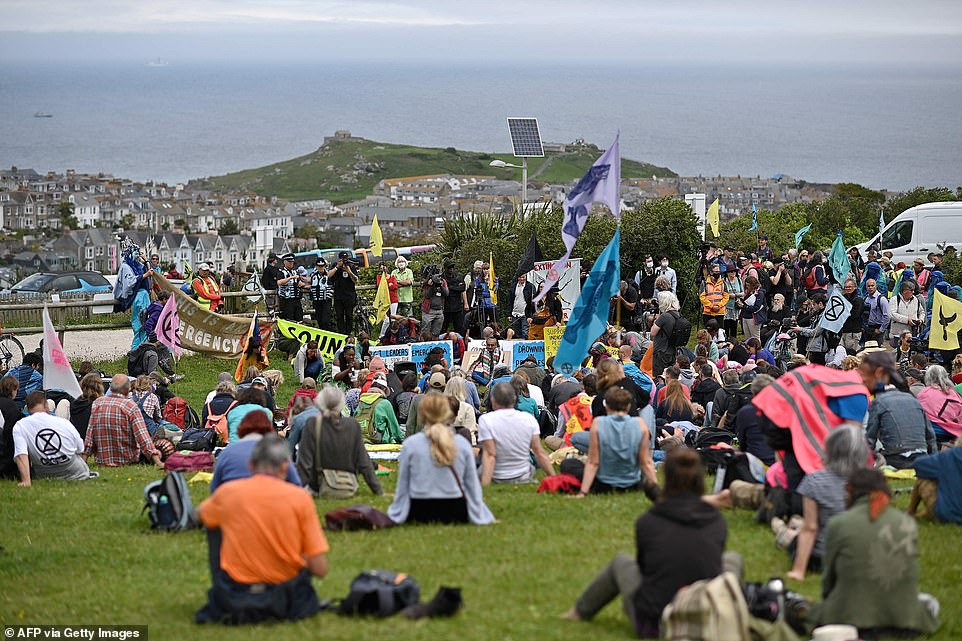 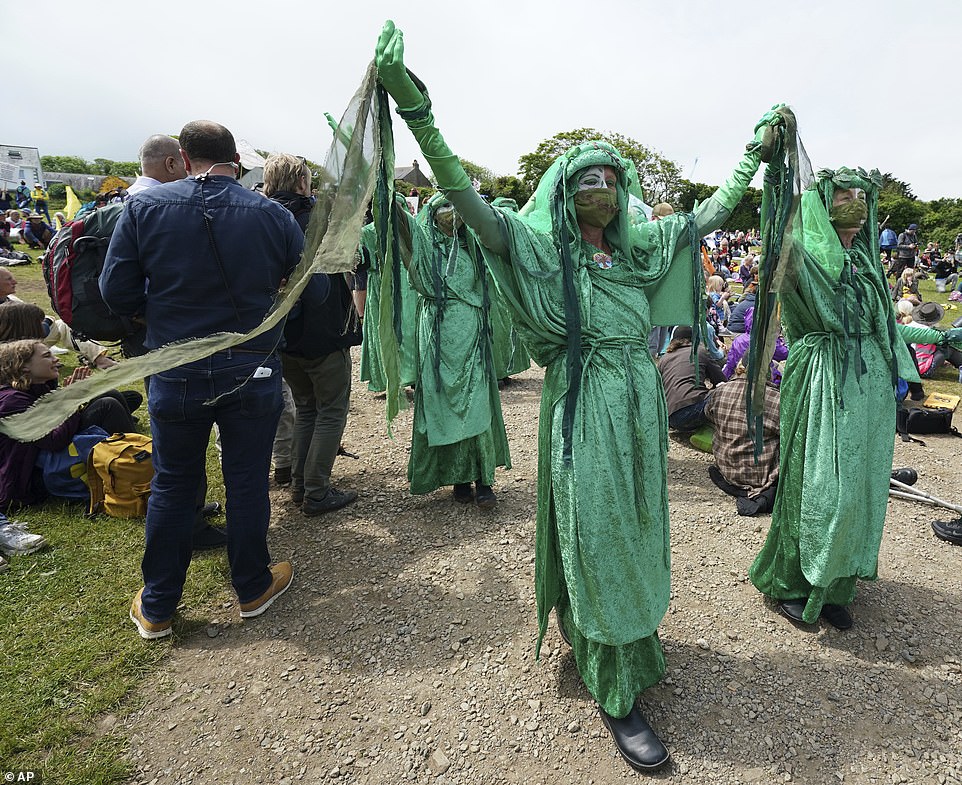 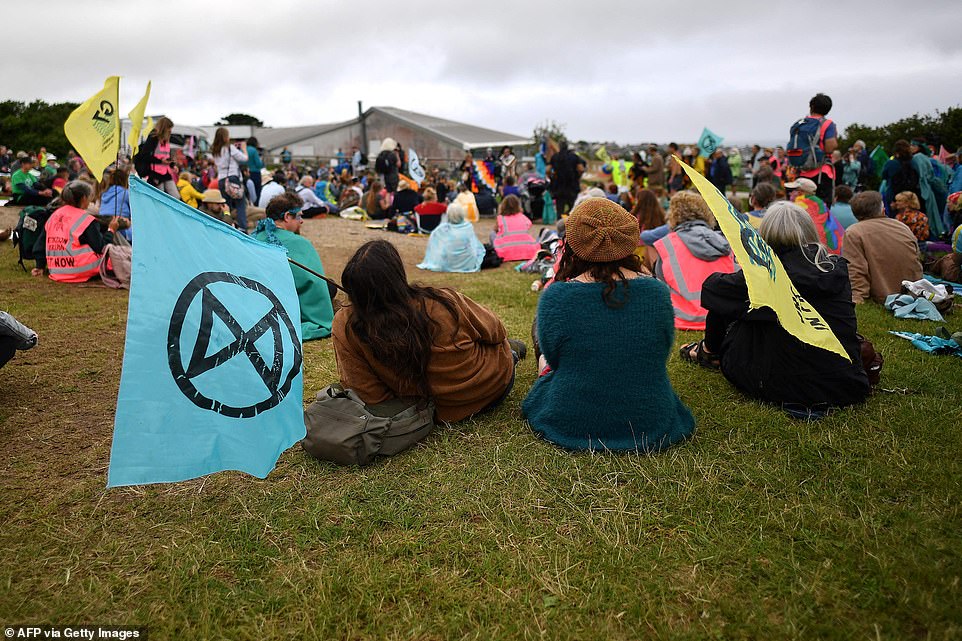 They began their protest with a rally at the leisure centre where they gave speeches and sang songs.

Halfway through the route, just before they reached the harbour, they held a few minutes’ silence with their fists in the air.

‘This is exciting, nothing like this ever happens in our little town,’ one resident said. Senara Hodges, 51, said she was ‘delighted’ the campaigners were protesting.

‘It’s absolutely fantastic. They are not causing the disruption – the Government is with its lack of action,’ the filmmaker added. ‘We are severely disrupted by the G7. It’s a huge imposition on a very, very busy town during peak season. It feels like a typical lack of understanding of the impact.’ 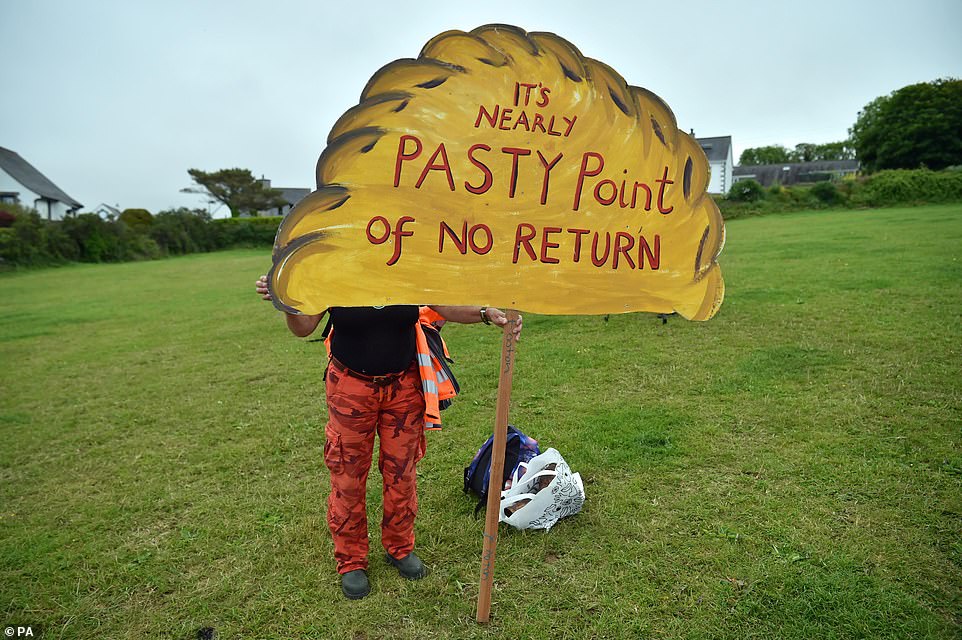 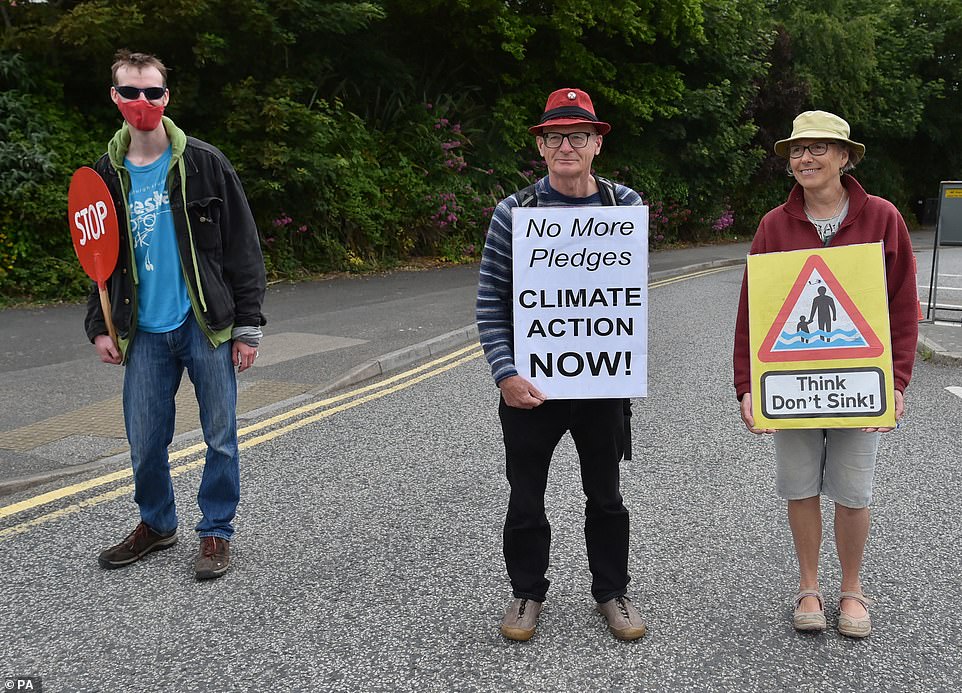 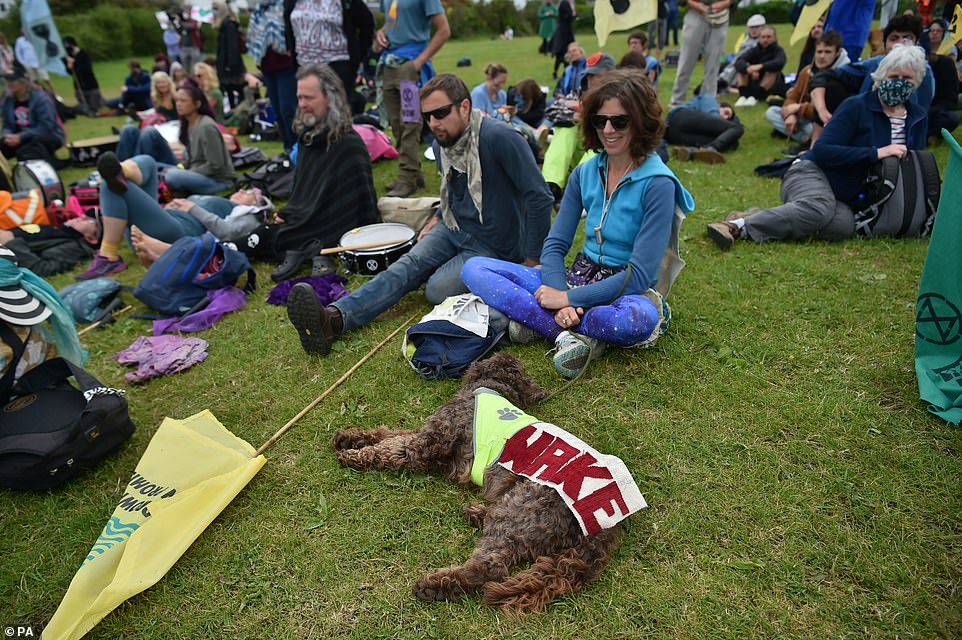 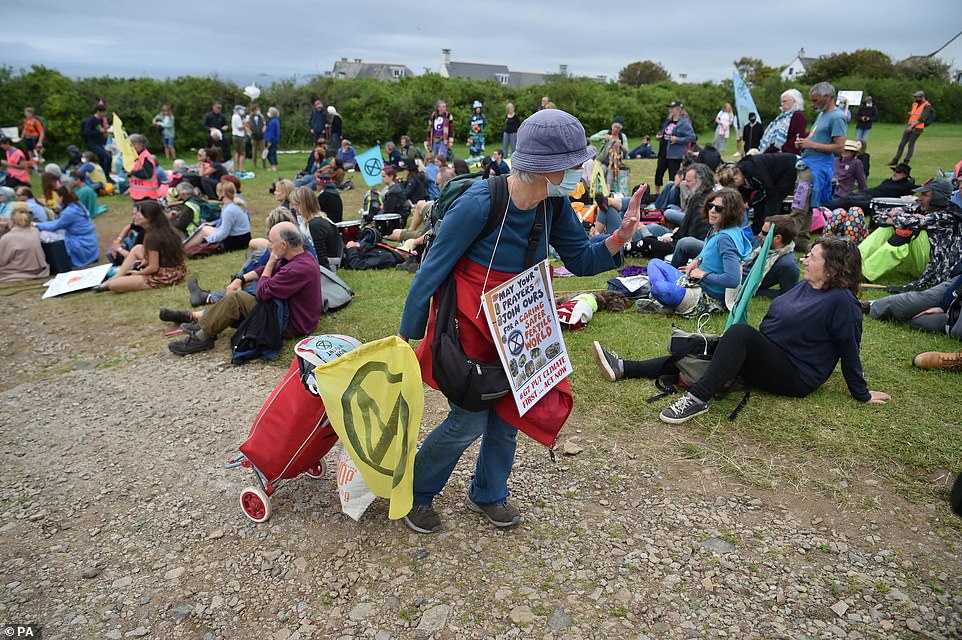 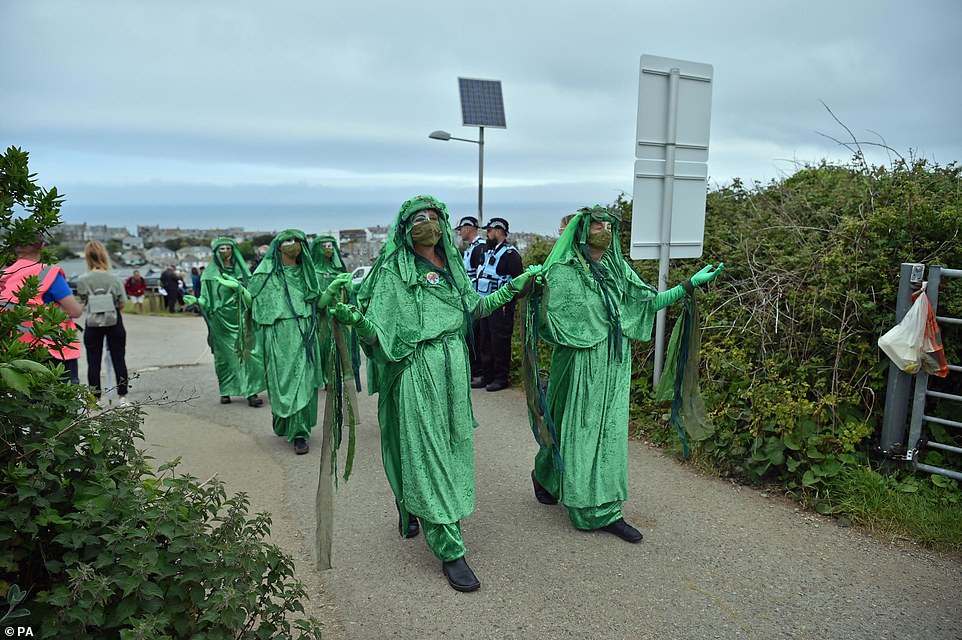 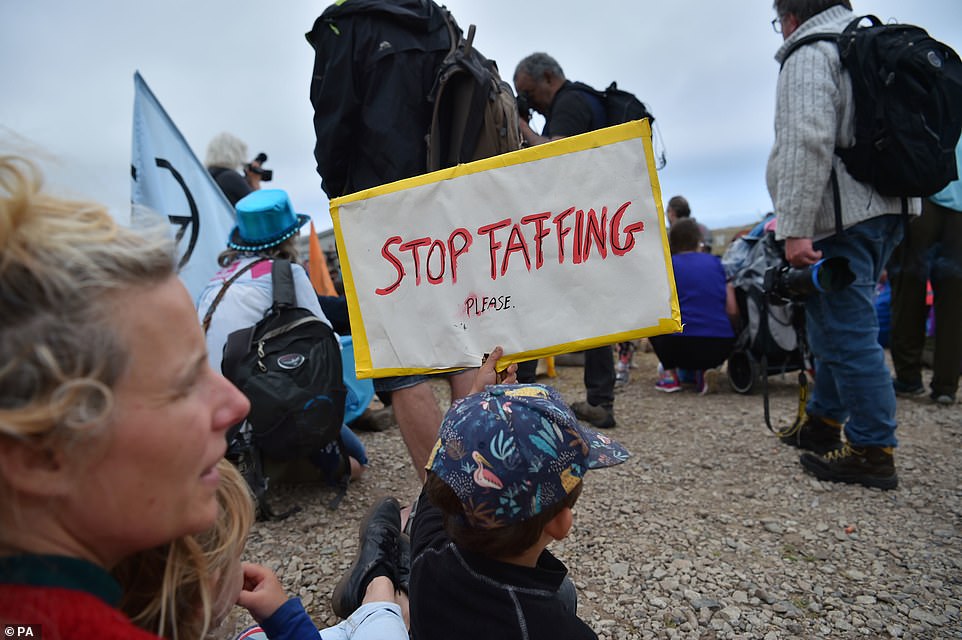 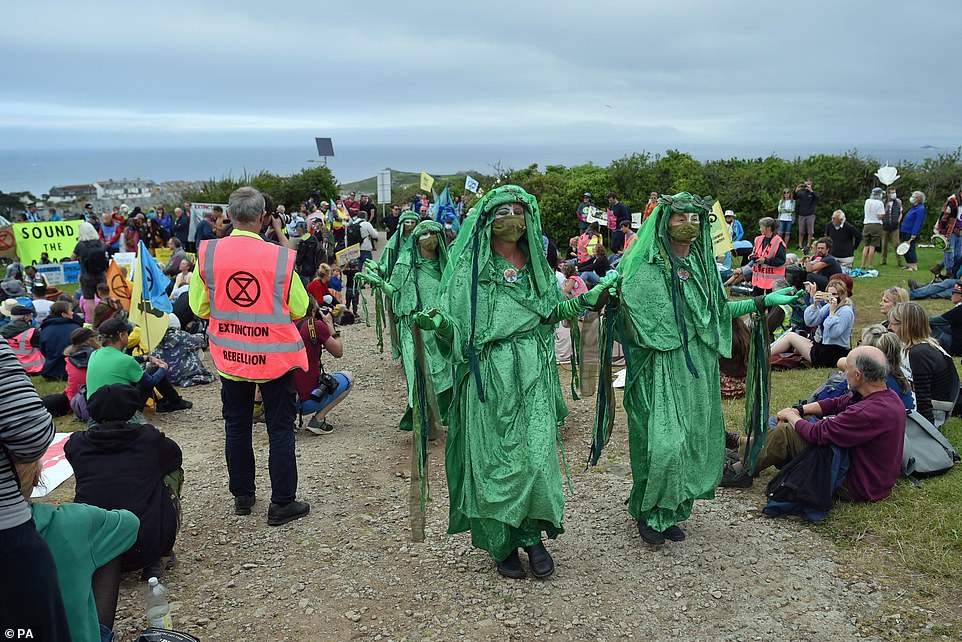 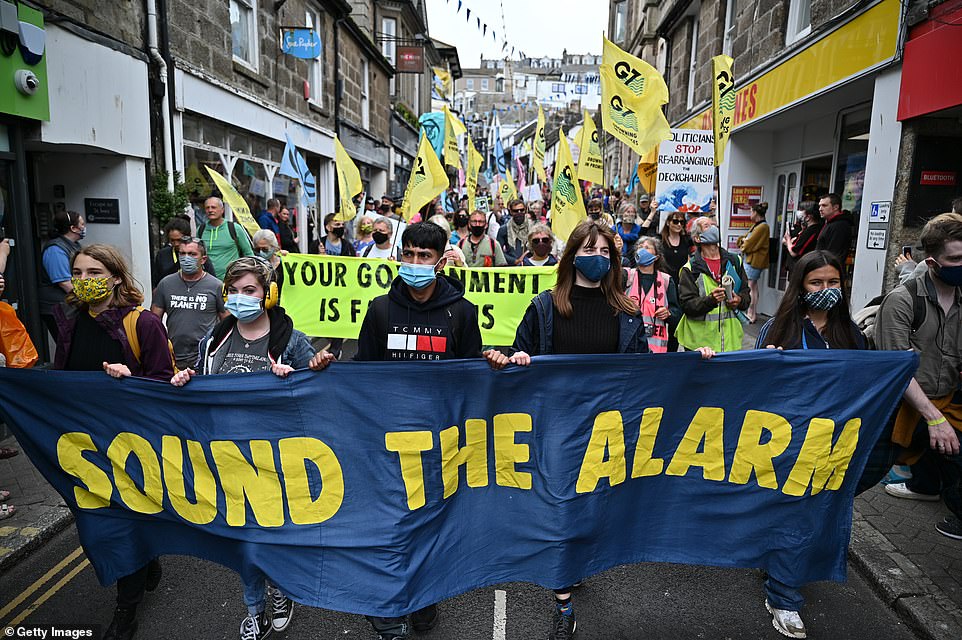 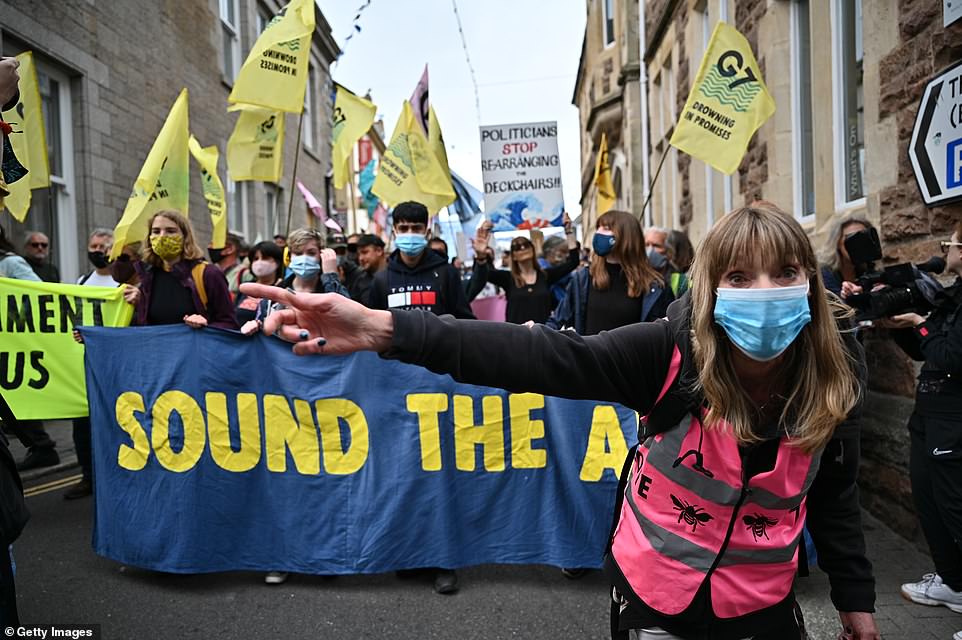 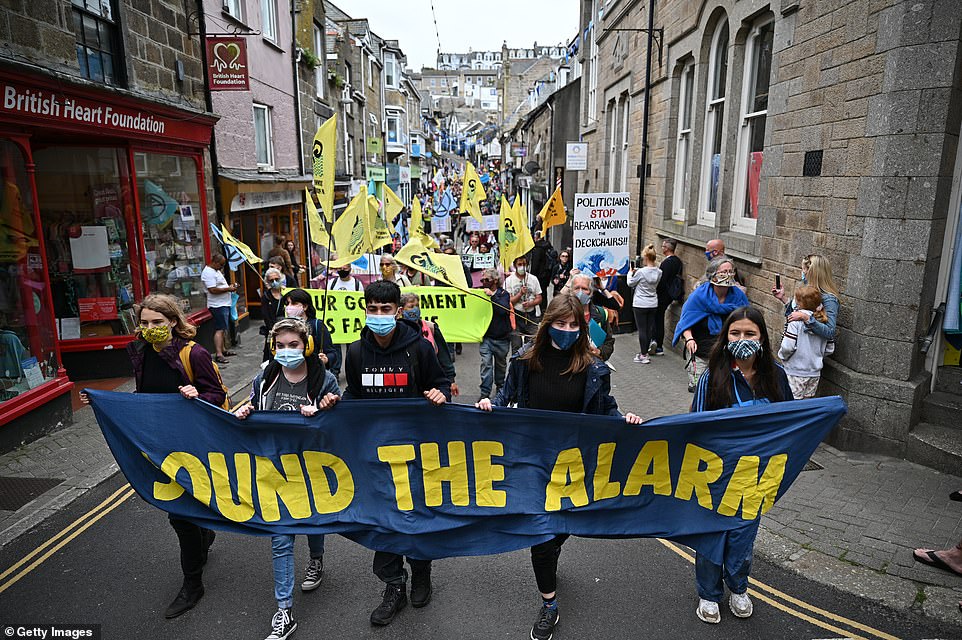 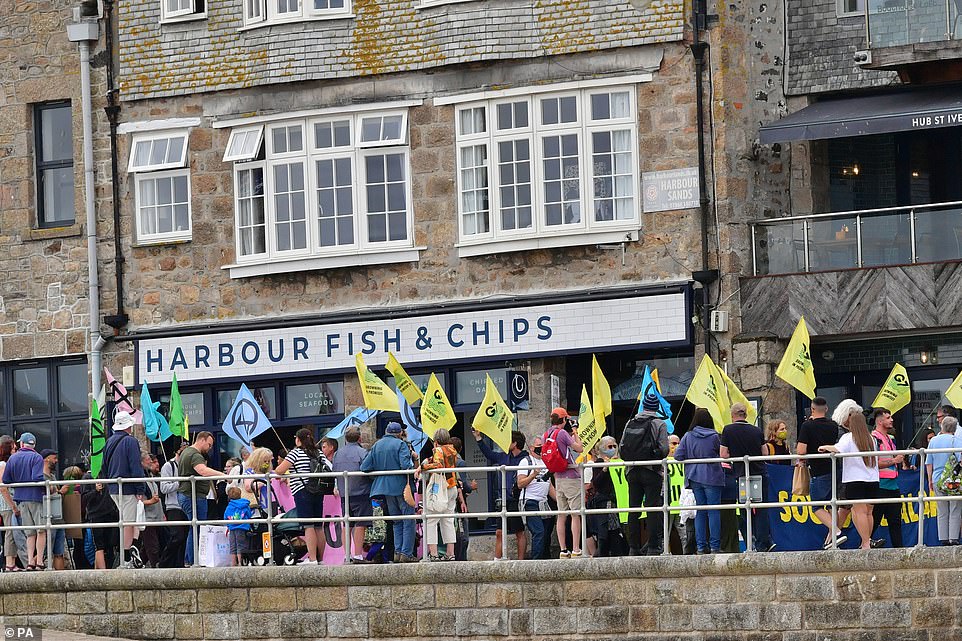 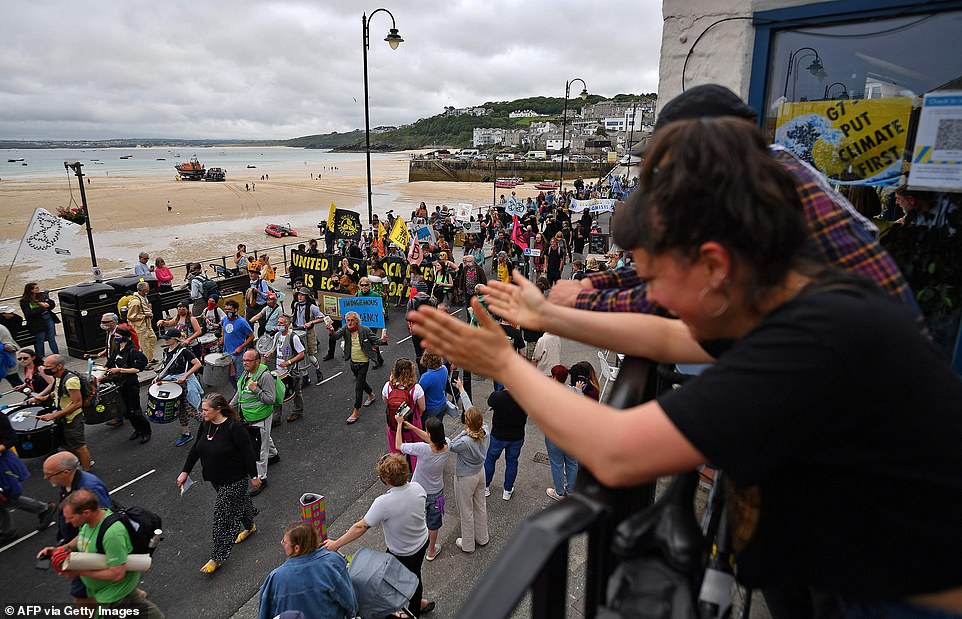 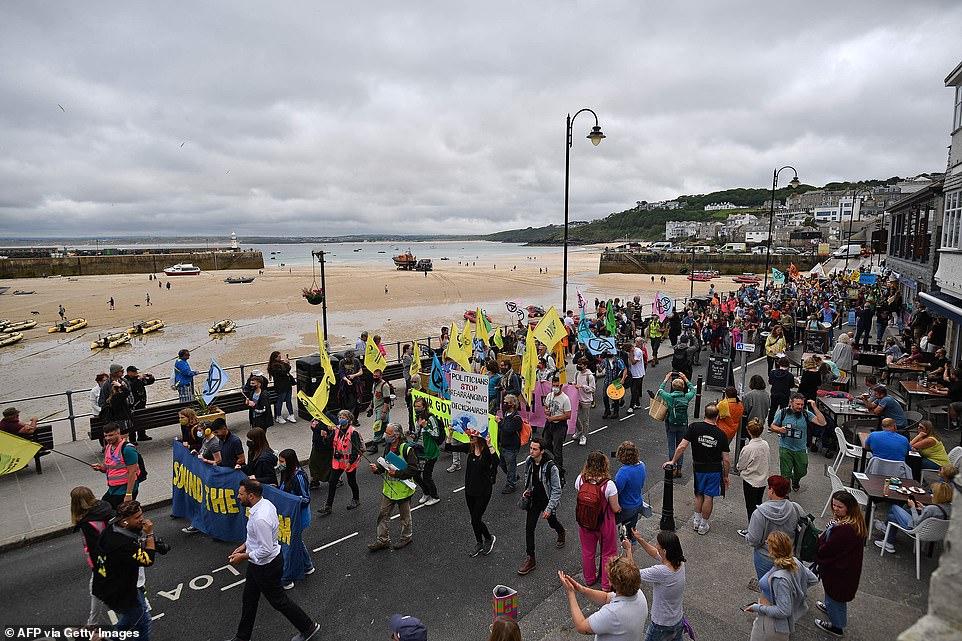 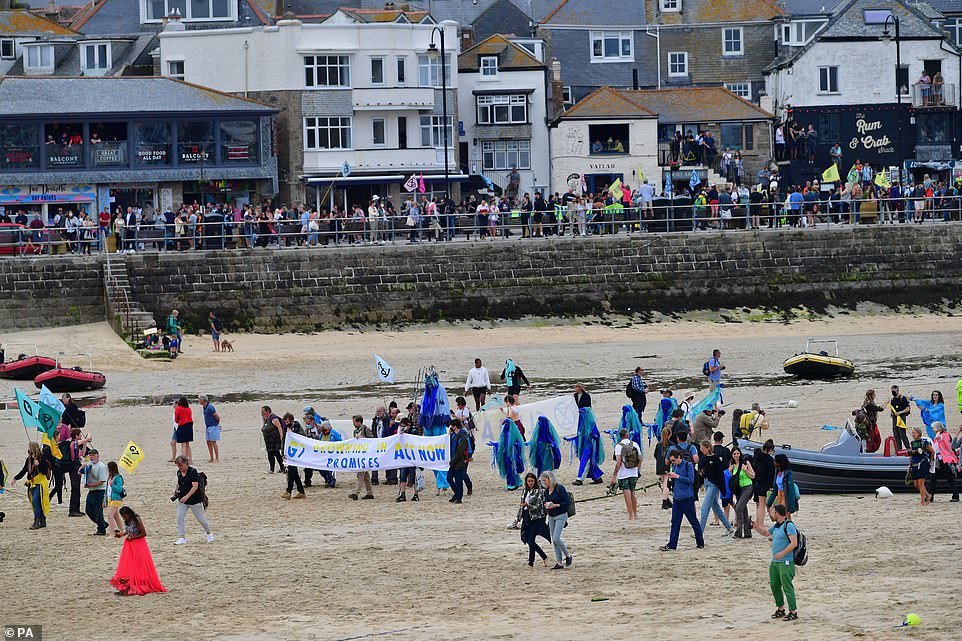 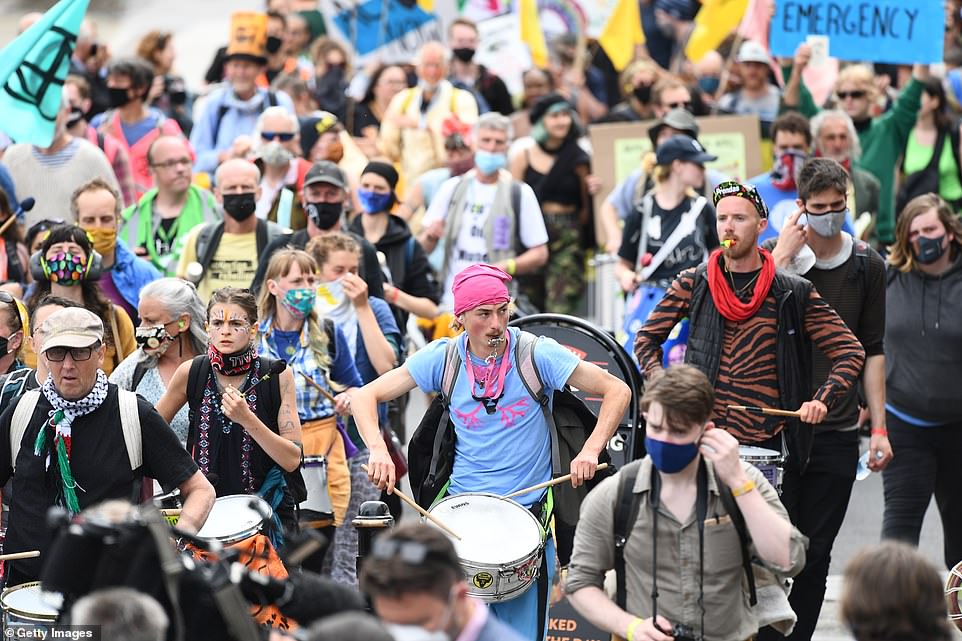 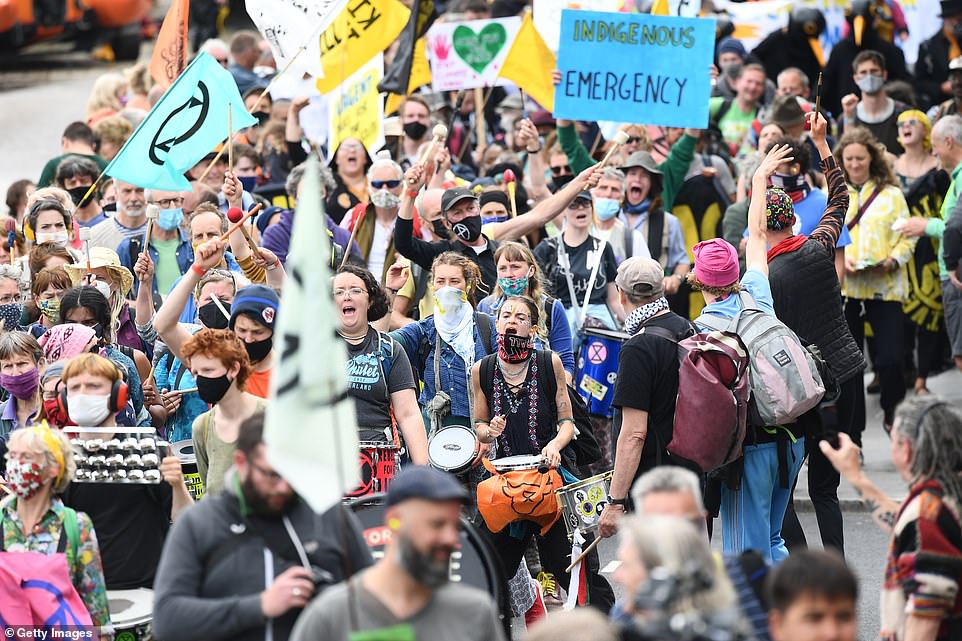 ‘I’m down here for the duration of the summit. I learnt about the climate emergency in January 2019 and I’ve not been able to focus on anything since,’ she said.

‘I’ve absorbed and understood the dire warnings of the world-leading scientists, academics and David Attenborough. I’m the mother of an eight-year-old son and there’s constant contradictions of their words with their actions. As a result I’m terrified for the future of my child and all our children.

‘I think it’s wonderful to see so many people coming here today in creative ways.’

Ms Baldwin added she was more stressed about the state of the planet than any competition as an Olympian. 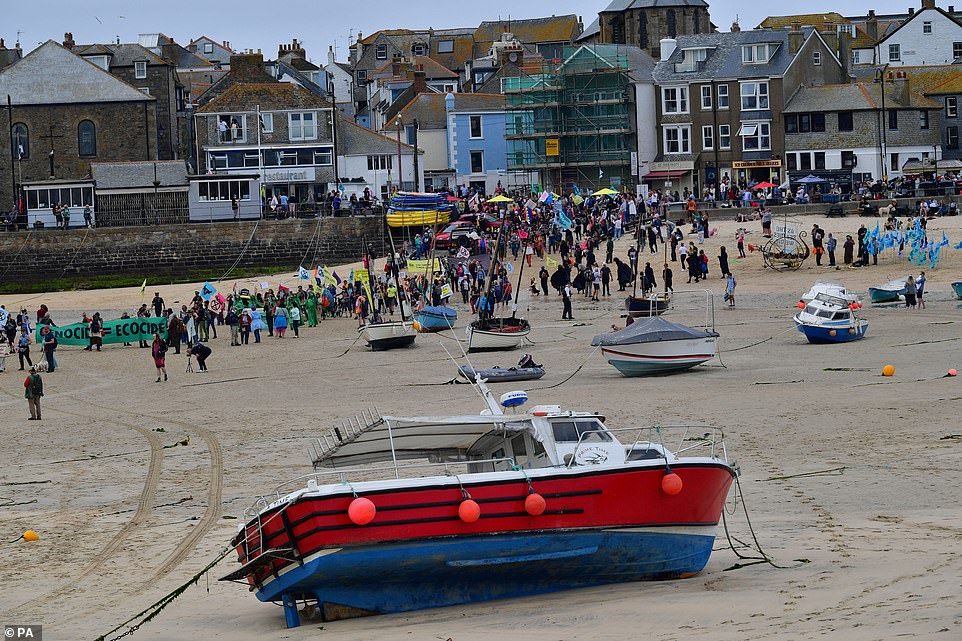 Boats can be seen on the beach, left by fisherman, as the march passes them in St Ives

She said: ‘I’m part of Ocean Rebellion because I’m an Olympic sailor and the ocean is where my heart is. I love the water and respect it.’

Nat Squire, 24, an osteopath graduate who lives in Cornwall, said he decided to take part in the protest because the Government was not acting ‘anywhere near as ambitiously as they need to be’.

‘They do a lot of greenwashing. They say they’re going to do something but they don’t have any intention,’ he said.

‘They’re in the pocket of the fossil fuel industry and the billionaires, making it difficult for them to make any changes, even if they wanted to.’

Extinction Rebellion will also hold protests in Falmouth on Saturday, where they will march through the town again. On Sunday there will be an art installation in St Ives.