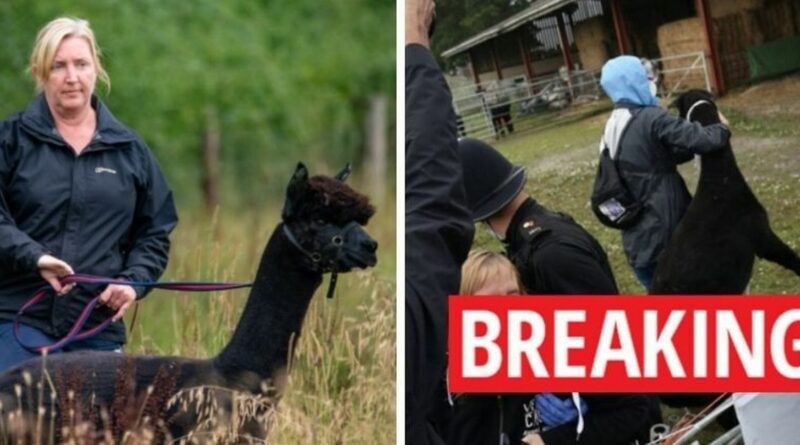 Geronimo the alpaca has been killed after a court-ordered destruction warrant was carried out following the animal twice testing positive for bovine tuberculosis, according to a statement from the Department for Environment, Food and Rural Affairs [DEFRA] said.

A number of policemen arrived at the farm of Helen McDonald, Geronimo's owner, earlier today.

The animal was finally put down after a long-running wrangle over the result of a TB test four years ago.

Officers wearing masks were seen speaking to people outside the farm in Wickwar, Gloucestershire as they arrived earlier today.

Webcam footage showed Geronimo apparently make a break for freedom from his captors and run into a field with other alpacas.

But several officials followed him, carrying a rope and chased the pack around the meadow.

Officials were seen with a horse-box style animal carrier, and one of them secured a rope around Geromino.

Other alpacas on the farm, which were not being kept not in the same pen, gathered nearby when the commotion started before running off to another part of the farm.

More than 100,000 people signed a petition to save the alpaca, which twice tested positive for bovine tuberculosis. Geronimo's owner, Helen Macdonald, maintained that the tests had returned false positives.

Ms Macdonald says she wants DEFRA to allow Geronimo to be tested for a third time or let him live to aid research into the disease.

As the officers arrived at the farm, she tweeted: "DEFRA have arrived! We are asking once again for an urgent meeting with George Eustice. Please don’t execute Geronimo."

A spokesperson for Avon and Somerset police said earlier today: “We can confirm officers are in attendance at a farm in the Wickwar area of South Gloucestershire this morning to support the Animal and Plant Health Agency, who are executing a court warrant.

“We’ll always support our partner agencies to carry out their lawful duties and our role is to prevent a breach of the peace and to ensure public safety is protected.”

One woman was briefly arrested after spraying officers liquid from a water pistol but was released within minutes.