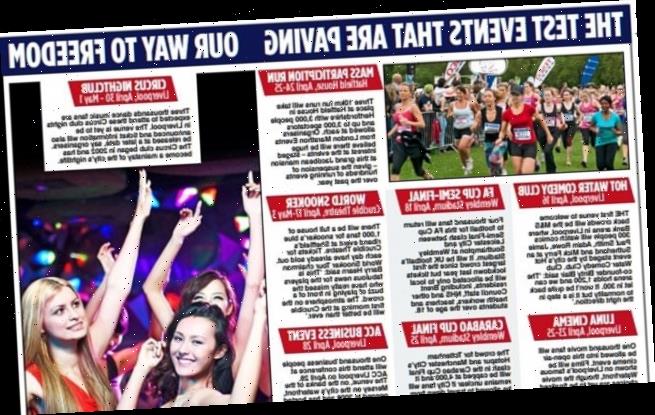 But here is where you CAN get a taste of freedom: Government reveals nine comedy gigs, football games and nightclubs where socially distancing will be scrapped as part of No10 pilot starting in TWO WEEKS – and you only need a negative Covid test to get in

Tens of thousands of Brits will be offered their first real slice of freedom over the next month as the Government launches trials of non-socially distanced mass events.

Up to 20,000 spectators will be allowed at football matches and other sporting events, while thousands will be able to attend nightclubs, theatres and comedy clubs for the first time in a year.

People involved in the trial will only need to produce a recent negative test and they will not need to socially distance from strangers.

Nine events will be used for a month-long trial, including an FA Cup semi-final and the final in front of 21,000 fans at Wembley, a nightclub in Liverpool, which would host 3,000 indoors, as well as three 10km outdoor runs for 3,000 athletes and up to 3,000 spectators.

Officials are also in talks with the organisers of the Brit Awards about allowing thousands of fans to watch the music event, hosted by comedian Jack Whitehall, in London’s O2 Arena on May 11.

The first event will begin next week at the Hot Water Comedy Club in Liverpool and the project will run until May 15. A second phase of pilots will take place from the end of May.

The trial events are designed to advance the reopening roadmap’s plan to scrap social distancing on June 21. Liverpool has been chosen for several events because of the city’s advanced testing infrastructure.

The first events begin next week and the project will run until May 15. They are designed to advance the reopening roadmap’s plan to scrap social distancing on June 21

The trials will be led by scientists, aided by researchers inside events to ‘monitor and study’ crowds.

Some events will be used to test Covid certificates, others to examine how ventilation, crowd flows and testing on entry can help audiences return without social distancing.

Researchers will also study ‘behavioural’ responses of crowds after a year of social distancing.

The next step of easing lockdown will go ahead as planned: The PM confirmed that non-essential shops, gyms, hairdressers and libraries in England will reopen from April 12 while pubs and restaurants will be allowed to serve customers outdoors. Overnight stays away from home in England will be permitted. The majority of outdoor settings and attractions like zoos and theme parks can also reopen.

Foreign travel: A traffic light system will be rolled out when international travel is allowed again but the PM refused to commit to his target roadmap date of May 17 for resuming flights. The new system will see countries rated green, amber or red based on data including vaccination levels and Covid-19 case numbers. Return travel from countries on the green list will be quarantine-free although people will still need to take tests before their trip and when they return. Ministers said it is ‘too early to say’ which countries will be green.

Vaccine passports: The PM unveiled the initial findings of a Whitehall review into the use of ‘Covid status certification’. The documents will combine vaccination, testing and immunity data and will be used to determine access to large-scale events. The Government has left the door open to the documents being used for access to pubs and restaurants.

Working from home and social distancing: Initial findings from a Government review suggest both WFH and social distancing could continue past ‘freedom day’ on June 21 – the last date in the roadmap. The review said it is looking at ‘how and when to safely lift or amend the 1m+ rule’ as well as other restrictions like working from home. It stressed that the conclusion will ‘depend on the latest data and evidence on the state of the pandemic’ while ‘the extent of any relaxation in social distancing measures’ will be linked to the success of vaccine passports. The findings do not contain a specific target date by which the rules will be lifted.

Return to spectator events: Ministers will run a series of pilot programmes in different venues to test the best ways to bring back crowds to live events. The pilots will be closely linked to the vaccine passports initiative, although the initial events will focus entirely on using testing data to grant access. Participating venues will include the World Snooker Championship at the Crucible in Sheffield and the Circus nightclub in Liverpool. Ministers are also hoping to admit a crowd of up to 20,000 people to Wembley for the FA Cup final on May 15, with a second wave of pilots taking place from the end of May.

Back to normal: A new paper published today by the Government’s SAGE committee said life will not go back to normal this summer even if the PM’s roadmap goes completely to plan. SAGE sources warned that while vaccines prevent the vast majority of people from falling ill and dying from coronavirus, they ‘are not good enough’ to see all curbs lifted ‘without a big epidemic’. The experts claimed that ‘baseline measures’, including some form of social distancing and masks, would need to remain in place until this time next year. They said they are ‘reasonably confident’ that Covid will be manageable by then.

A board of advisers, made up of independent scientists and public health experts, will assess the data and present results to Ministers at the end of May.

The Government’s safety review also said work was ‘ongoing with clinical and ethical experts to ensure appropriate exemptions for people for whom vaccination is not advised and repeat testing would be difficult’.

Meanwhile, Boris Johnson said tonight that Covid passports would not be rolled out in hairdressers, gyms or outdoor pubs and restaurants on Monday, when those venues are due to reopen as part of phase two of the lockdown-easing plan.

But the review claimed proof of vaccination was ‘likely to become a feature of our lives’ until the end of the pandemic.

The review, released tonight, pointed out that even if the Government did not set up and regulate a system of ‘Covid-status certification’, venues would be able to do it themselves under existing legislation.

‘Even without Government intervention, COVID-status certification is likely to become a feature of our lives until the threat from the pandemic recedes,’ it said.

‘In the UK, businesses and other organisations are able to ask customers for proof of Covid-status in order to access their premises, as long as they are compliant with equalities legislation.

‘The Government believes that introducing a ban on this would in most cases be an unjustified intrusion on how businesses choose to make their premises safe – although … there may be exceptions where the Government needs to intervene to ensure equitable access to essential services.

‘It is therefore right that the Government provides a means of easily demonstrating COVID-status, in order to ensure UK citizens and residents are not denied opportunities to travel or attend certain venues or events.’

Mr Johnson revealed that he would be heading to the pub on April 12 and ‘cautiously but irreversibly be raising a glass of beer to my lips’, and said that nothing would change in May either.

But a decision on whether people will later require a passport to do this, instead of social distancing, this has been kicked further down the road to allow more ‘consultation with industry, as part of the review of social distancing rules and taking into account the equalities and other impacts’.

Mr Johnson told the briefing tonight: ‘On Covid status certification, as we prefer to call it, the most important thing to say to everybody listening and watching is there’s absolutely no question of people being asked to produce certification or a Covid status report when they go to the shops or to the pub garden or to their hairdressers or whatever on Monday.

‘And indeed we are not planning that for stage three either, May 17 as you know we are hoping to go for the opening up of indoor hospitality and so on. We are not planning for anything of that kind at that stage.’

The review added: ‘It is possible that Covid-status certification could also play a role in reducing social distancing requirements in other settings which people tend to visit more frequently, for example in hospitality settings.

‘However, the Government recognises this has significant implications for businesses and their customers, so this will be further considered in consultation with industry, as part of the review of social distancing rules and taking into account the equalities and other impacts.

‘For now, businesses should continue to plan to reopen in a way that follows the latest Covid-Secure guidance, and certification will not be required for reopening as part of step 2 or step 3.’

John Foster, the CBI’s director of policy, said: ‘Covid status certificates have a part to play in some of the more challenging parts of the economy, like large scale events.

‘The government has listened to industry concerns and is seeking to deploy them in a targeted way. These first trials will be watched with great interest.

‘Any introduction ought to come with rigorous guidance and enforcement to help firms navigate ethical, legal and practical implementation challenges.’ 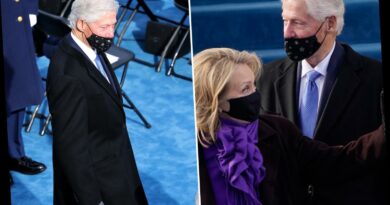