Home » World News » ‘He has a duty!’ Biden slammed for ‘prioritising holiday’ over US citizens stuck in Afghan 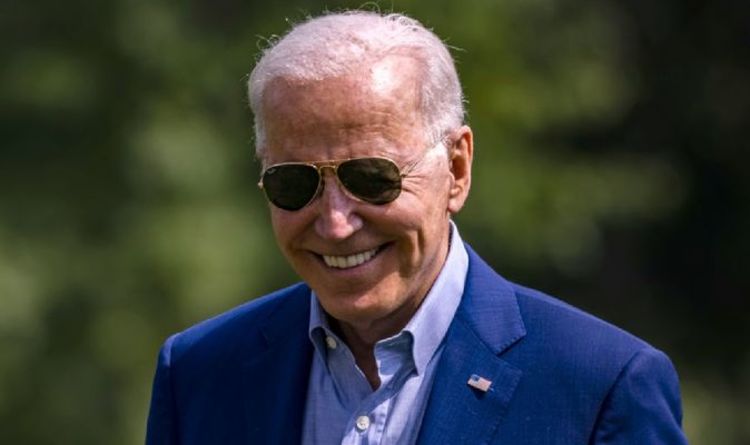 Biden ‘has a duty to American people’ says Robichaux

Speaking to Fox News Tennessee Congresswoman, Republican Diana Harshbarger and former US Marine Chad Robichaux unleashed a series of ferocious attacks branding Mr Biden for “breaking promises” for deserting US Americans as he went off on holiday to his home state of Delaware for the weekend. It comes as the New York Times reported on Monday how a around a massive “1,000 people” including dozens of American citizens and Afghans holding visas to the United States remained stuck in Afghanistan on Sunday as they await clearance for departure from the Taliban.

Former US Marine Mr Robichaux, who served eight tours in Afghanistan, skewered Mr Biden for his dereliction of duty to the American people still stranded under Taliban rule.

He said: “The Commander and Chief has a duty and responsibility to the American people.

“Even if it was one American, the commander and chief should be 24/7, around the clock, in the White House making sure that we get that American out!

While Tennessee Congresswoman Ms Harshbarger also slapped Mr Biden down for his behaviour in a brutal takedown of the President’s attitude towards the crisis.

Ms Harshbarger said: “This is the time for him to be on the job – 100 percent!

“We have people still in Afghanistan, they (the Taliban) won’t let our planes leave.”

The Republican went on to add how the situation is “a travesty of the worst kind” and accused Mr Biden of “prioritising his vacation over the lives of American citizens”.

Read more: Biden sent £1.45trillion warning as solar storm could cripple the US

Ms Harshbarger expressed her astonishment at Mr Biden’s holiday before issuing her deep rooted concerns over US citizens’ safety adding “God only knows what will happen if they can’t get out.”

The Republican then turned on Vice President Kamala Harris who she claimed she “had not seen” either at the White House or on Capitol Hill in recent days.

She slammed: “Who is in charge?! That is the question I have as well as many of colleagues!”

Reacting in a fury at the news, Republican Representative Mo Brooks tweeted: “Joe Biden will be spending his weekend on vacation in Delaware…

“Roughly 100 Americans will b spending their weekend abandoned in Afghanistan.”

The comments come as the Biden administration has faced fierce criticism for leaving Americans and Afghan allies behind after the final troops left on August 30.

Negotiations to allow planes of American citizens to depart whcih involve officials of the Taliban, the USA and Qatar have dragged on for days leaving evacuees in limbo and fearing for their lives for wha tthe Taliban might do next.

Mick Mulroy, a former senior Pentagon official who has been helping coordinate the United States evacuation from Afghanistan suggested the reason the Taliban wants to prevent these people from leaving is “likely because they intend to punish them for their cooperation with the U.S.”

Nicholas Parsons, 95, forced to cancel his performances in Edinburgh