President Biden has 'held the line' with China says expert

Both the White House and the Pentagon have supported General Mark Milley after The Washington Post published a few excerpts from “Peril”, an upcoming investigation book. According to the report, Joint Chiefs Chairman Gen. Mark Milley had to contact his Chinese counterpart, not one but two times, to reassure him no military conflict of any sort was ongoing.

“General Li, I want to assure you that the American government is stable and everything is going to be okay,” Milley told him, according to reporters Bob Woodward and Robert Costa.

The top military officer even went further pledging to his analogue he would alert him in the event of a US attack.

The calls raised concerns that Milley may have subverted civilian control, but Biden defended him on Wednesday.

“I have great confidence in General Milley,” Biden said.

Although he did not deny the allegations published in “Peril”, Mark Milley, through his office, commented that the calls he made as chairman of Joint Chiefs of Staff were coordinated within the Pentagon and across the U.S. government.

“All calls from the Chairman to his counterparts, including those reported, are staffed, coordinated and communicated with the Department of Defense and the interagency,” said Colonel Dave Butler, Milley’s spokesperson, in a statement.

“General Milley continues to act and advise within his authority in the lawful tradition of civilian control of the military and his oath to the Constitution.”

“The secretary has complete and utter trust and confidence in General Milley and in his role as Chairman of the Joint Chiefs of Staff,” Pentagon spokesman John Kirby told reporters while declining to address the book’s allegations.

Scheduled to be published next week, this new book suggests the same General Milley decided to protect nuclear weapons from Trump from his own initiative.

He allegedly thought the exiting President was suffering from “serious mental decline.”

DON’T MISS:
Meghan and Harry under ‘tremendous pressure’ over Netflix deal [BREAKING]
Queen ‘put her foot down’ to dismiss Harry and Meghan’s demands [INSIGHT]
‘You cannot do it without the UK!’ Brussels’ EU army dreams shattered [OPINION]

He said: “I did not ever think of attacking China.”

“The people that fabricated the story are sick and demented, and the people who print it are just as bad.” 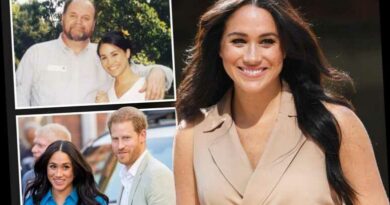