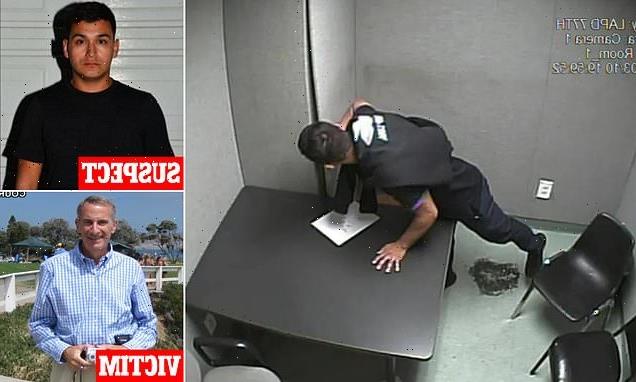 Man, 23, charged with ‘killing elderly boyfriend, 73, and encasing his body in concrete in bathtub in his Hawaii home’ is seen trying to ESCAPE LAPD interview room as cops reveal he ‘bought the deed to the man’s house and tried to sell his Audi’

A 23-year-old who was allegedly in the United States illegally and is charged with murdering his elderly boyfriend and encasing his body in concrete apparently tried to escape LAPD custody.

Juan Tejedor Baron, 23, was arrested in California early last month in connection with the gruesome murder of 73-year-old Gary Ruby, who had been found entombed in cement in a bathtub at his $2.2million gated Honolulu home.

Baron was caught trying to flee the country following the murder, making it as far as the Golden State before he was apprehended by Los Angeles police on March 9, who had found him ‘hiding in a crawl space under an enclosed bench’ of a Mexico-bound bus, police have said.

He was later taken into custody in California, where newly released court documents show he apparently tried to escape.

Photos taken from surveillance footage of police interview room where Baron was being held show him trying to push and pry the wall panels, according to KHON. 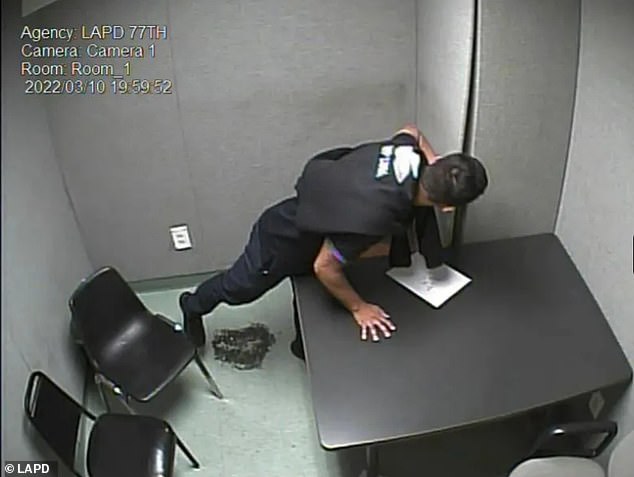 Juan Tejedor Baron, 23, was seen in surveillance footage apparently trying to escape LAPD custody after he was arrested last month in connection with the death of his elderly boyfriend 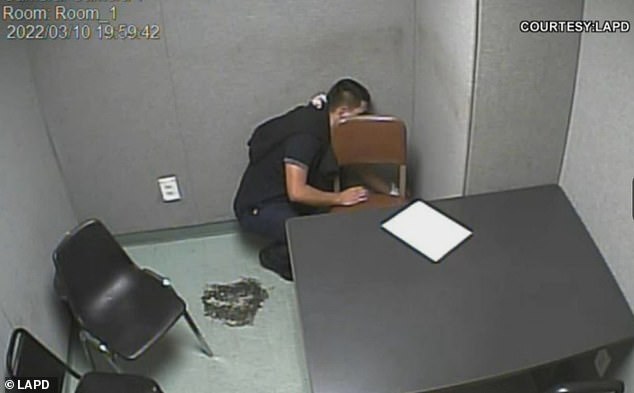 Baron has since confessed to the killing – which authorities believe took place sometime in February – telling cops he murdered longtime Honolulu resident Ruby – with whom he had been in a romantic relationship – after learning the latter was HIV positive.

Investigators have since discovered that Baron last entered the US on June 26, 2018 on a tourist visa, and was allowed to stay in the country until December 25, 2018.

But, prosecutors claim, he ‘overstayed’ his visa, and therefore remains in unlawful status.

That means that if he is ever released from the Oahu Community Correctional Center, he would be transferred to federal custody, according to KITV. It would then be within the federal government’s purview to initiate deportation proceedings against him.

But for now he remains in custody without bail pending trial on June 5, Hawaii News Now reports. He is scheduled to attend a bail hearing next week.

It remains unclear whether Baron has retained a lawyer who could speak on his behalf. 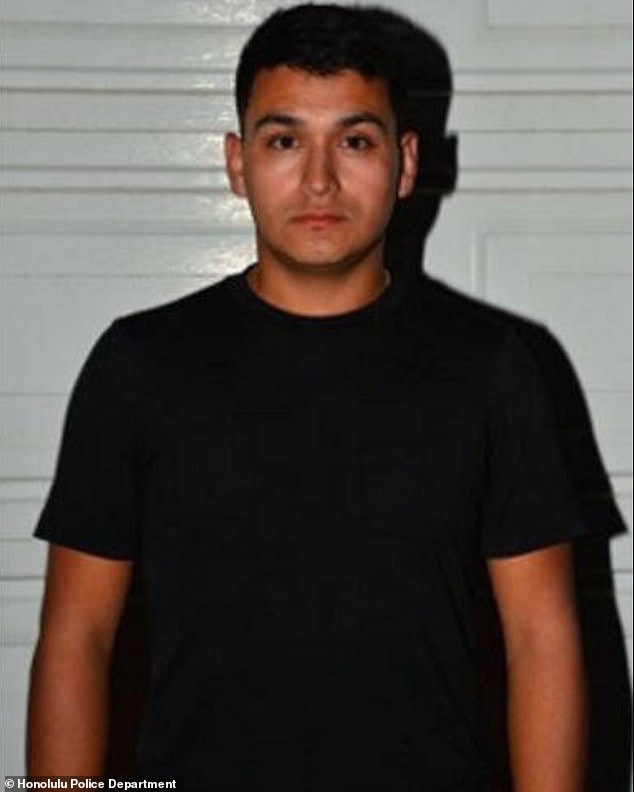 Baron, 23, is now being held in jail without bond in connection with the grisly murder of Gary Ruby in Honolulu 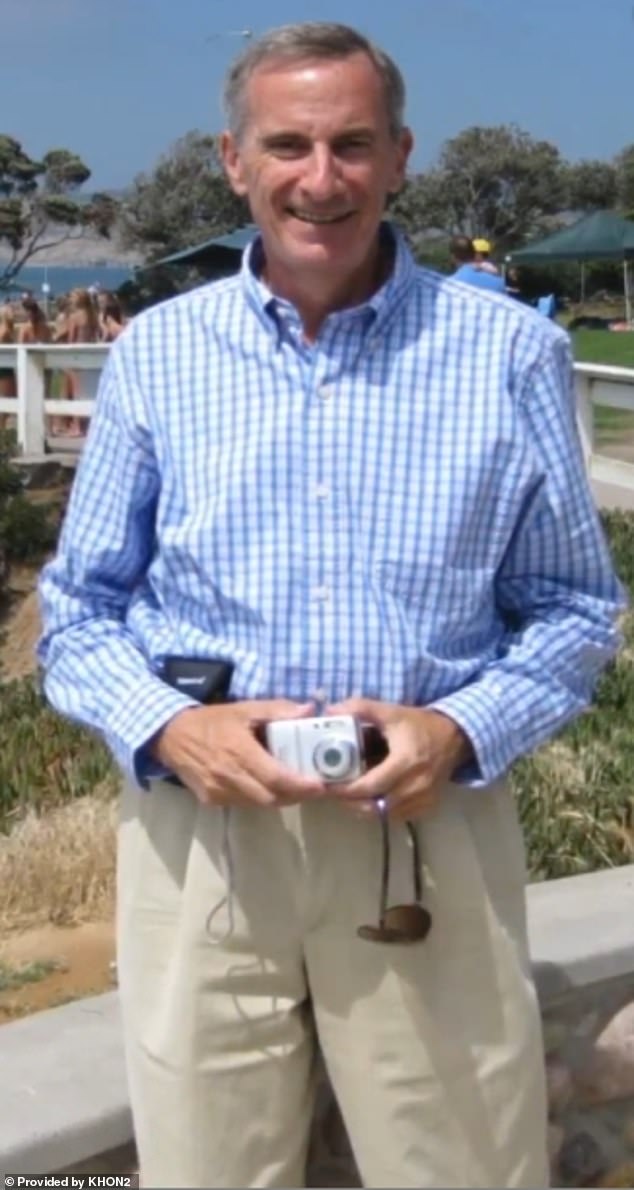 The body of longtime Honolulu resident Gary Ruby, 73, was found by Hawaii police February 8 encased in concrete in a bathtub inside of his $2.2million home

Baron has previously confessed to killing Ruby after he told him he had HIV following a sexual encounter in February, spurring the suspect to strangle his much older lover with a belt, according to an arrest warrant.

‘Baron stated that he had sex with Gary but became angry after Gary informed Baron that Gary was HIV-positive,’ the warrant reads.

Baron stated that soon after, he noticed Gary choke slightly while eating, at which point he ‘reacted by placing a belt around Gary’s neck and tightening the belt until Gary lost consciousness.’

He also allegedly told the cops he then dragged the elderly man’s corpse to the bathtub, before using a ‘kitchen knife to slit Gary’s wrists in an effort to stage a suicide.’

Cops said that Baron then confessed to attempting to cover up the killing, pouring cement he found inside Ruby’s garage and coffee grounds over the victim’s body in the tub – before realizing that he did not have enough to submerge the victim.

‘Baron then drove to Lowe’s to purchase four additional bags of concrete and further filled the bathtub, covering Gary,’ the filing states.

Baron further told detectives that he then added coffee grounds to the bathtub concoction, to better mask the smell of Ruby’s decomposing body.

‘Baron stated he used coffee grounds to cover the cement in an effort to conceal the smell of decomposition,’ the affidavit states. 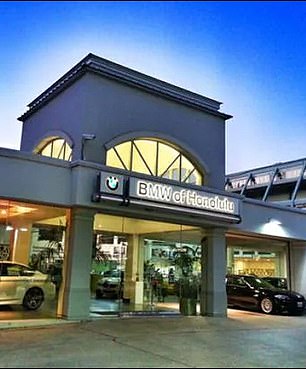 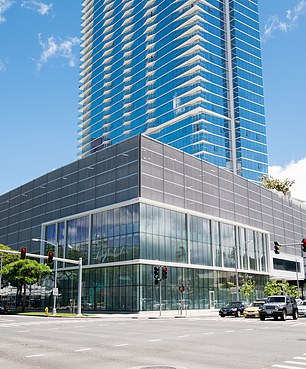 Recently released court documents allege Baron had tried to trade Ruby’s Audi A6 at the Honolulu BMW and Audi showrooms, left and right

Court documents have also revealed that, following the murder, Baron made multiple attempts to trade Ruby’s Audi A6 at the Honolulu Audi and BMW showrooms.

At both locations, he allegedly attempted to convince sales agents that Ruby was his uncle who lived in Texas and said his ‘Uncle Gary’ was willing to sign all the required documents electronically, according to the court documents obtained by KITV.

He then allegedly provided sales associates at both locations with Ruby’s vehicle insurance, using Ruby’s personal email to transmit a copy of Ruby’s Hawaii drivers’ license, and ultimately presented the Audi general sales manager a fraudulently-obtained certificate of title issued on February 7.

That title said it was issued by the Department of Motor Vehicles Kapalama Satellite City Hall and named Baron as the registered owner.

And, court documents also claim Baron purchased a sales deed for Ruby’s home on HawaiiDeed.com, paying $478.53 for the transfer with Ruby’s Mastercard and conducting the transaction with Ruby’s personal email address.

He then allegedly tried passing off both the multi-million dollar home and the Audi A6 as his own when questioned by lawmen investigating Ruby’s sudden disappearance – telling officers he had purchased both from the deceased.

But that claim ultimately led police to become suspicious of the 23-year-old.

According to the arrest warrant, Baron had told the officer that he had bought the house off of Ruby about five years prior. But when the officer relayed that the property records indicated that Ruby had purchased the home in 2020, he allegedly ‘changed his story… saying he bought the residence two years ago and had the deed for it.’

That inconsistency served as enough grounds for suspicion for officers to enter the home the following day, where they found Ruby’s remains inside the master bedroom tub. A medical examiner identified the remains as Ruby’s by matching blood at the bottom of the tub to that of the senior’s.

The death was promptly ruled a homicide, with a then-nowhere-to-be-found Baron named a prime suspect.

As police searched for leads, Ruby’s brother told officers that his brother had mentioned in an email ‘a new love interest named Juan’ who was ‘significantly younger.’

The affidavit notes that neighbors and Ruby’s own brother knew about the couple’s relationship – noting that Baron was seen at the elderly man’s house inside the gated community.

Surveillance footage later obtained by authorities also showed Baron purchasing several bags of cement, and court documents say he had a receipt from Lowe’s on him for the purchase of Quikrete brand cement on February 7. 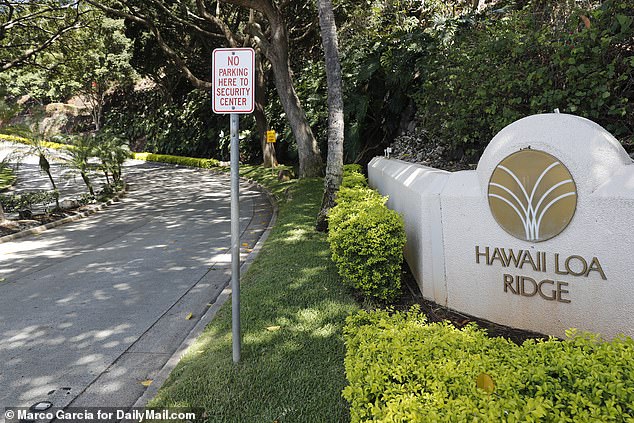 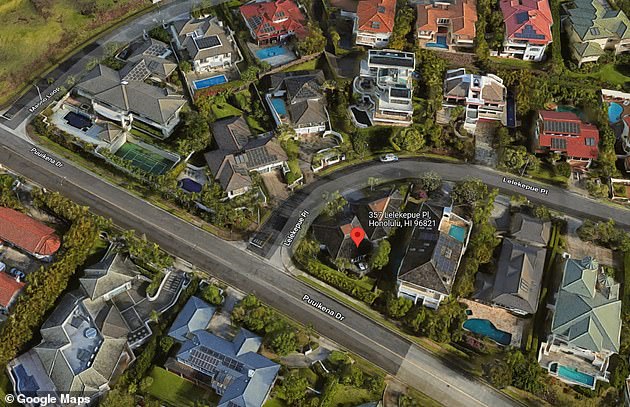 Victim Gary Ruby, 73, lived on a corner of a 357 Lelekepue Place (pictured) in the exclusive 557 home community

Honolulu Police had first visited Ruby’s home on Lelekepue Place in the gated community on Monday after a welfare call from his brother – who lives on the mainland. His brother said he hadn’t heard from the 73-year-old since the beginning of February.

Officers then searched the three-bedroom-and-bath home for the homeowner who they were unable to locate. But police did notice the bathtub was filled with a concrete-like substance.

‘The initial case was a missing person investigation. It was not a criminal case,’ Lieutenant Deena Thoemmes told NBC News.

When they investigated the bathtub, they were overwhelmed by the smell of coffee.

‘When we entered the apartment, we smelled coffee, no doubt,’ Thoemmes of the Honolulu Police Department told NBC News.

Once officers began to smell human decomposition, they started to chip away at the concrete.

‘The body was in the standalone tub and it was in a state of decomposition once we chipped away at the concrete mixture.’

Baron and Hannon were later seen at the Waikiki Hotel before fleeing to California.

Security footage shows the two loved-up men holding hands and being affectionate toward each other on hotel surveillance footage. Baron appeared to be looking up directions on his phone before they walked down the sidewalk toward an unknown destination with Hannon’s arm around the shorter man.

Both men were ultimately booked into the Los Angeles Police Department Metropolitan Detention Center, but Hannon was freed, with the authorities citing ‘an insufficient complaint’ as the reason for his release.