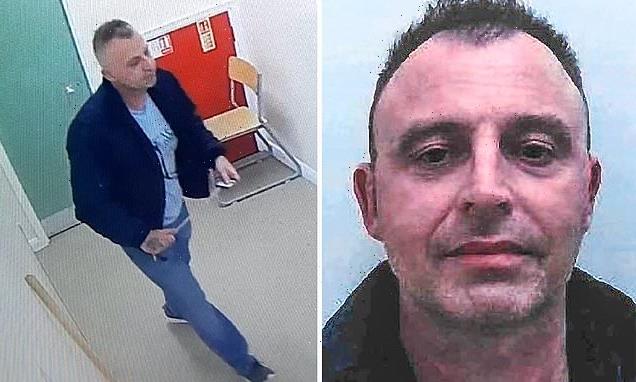 Manhunt is launched after convicted killer, 54, who strangled a woman with a belt went on the run from open prison in Gloucestershire 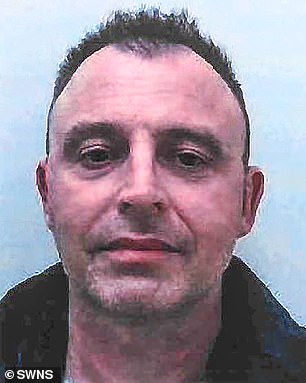 Marcus Coates, 54, has a number of tattoos

A convicted killer who strangled a woman with a belt is at the centre of a police hunt today after he absconded from an open prison.

Marcus Coates, 54, was serving a sentence for manslaughter at HMP Leyhill in Tortworth, Gloucestershire.

Coates, who killed Jennie Banner, 32, in August 2011 and left her body for five days, was last seen near Bristol’s bus station on Thursday night.

He was convicted of manslaughter in 2012.

Following the court case, Detective Chief Inspector Jon Clayden described him as having a ‘long history of violent offending’, branding him a ‘danger’.

During sentencing, Judge Philip Statman described Coates as ‘dangerous’, adding that he had shown no remorse – only self-pity.

At the time of his disappearance, Coates was captured on CCTV wearing a blue polo shirt, blue jacket, blue jeans and grey Puma trainers.

Avon and Somerset Police have warned the public to stay away from him and to call 999 immediately.

Coates has links to London and Kent and is described as 5 foot 10 inches tall, with blue eyes and receding mousey brown hair.

The force said his tattoos include his name and a rose on his name on his left hand, a heart and ‘West Ham FC’ on his right arm and a female’s name across his knuckles on his right hand.

A police spokesman said: ‘He was last seen near Bristol Bus Station between 8.30-9.30am on Thursday 28 October wearing a blue polo shirt, blue jacket, blue jeans and grey Puma trainers, as per the CCTV image. 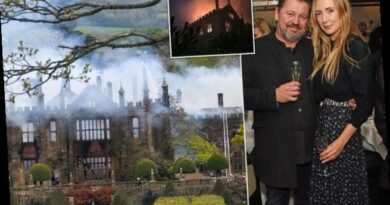 Multi-millionaire plans to turn mansion into venue inspired by Batman