Home » Outrage of the war on cops: Devine 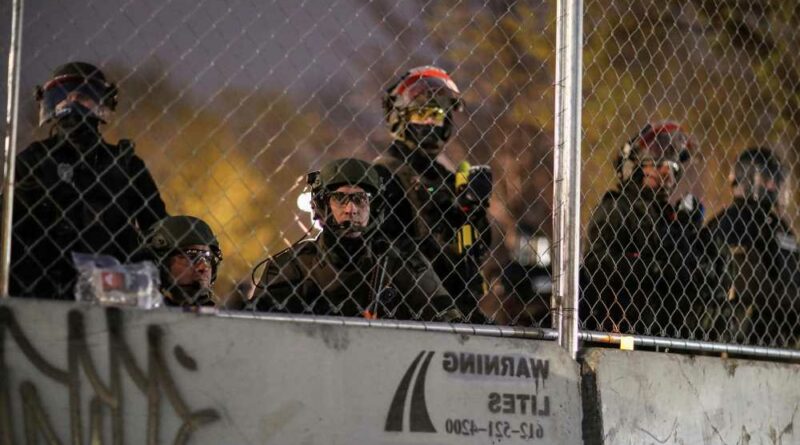 Why would anyone want to be a cop with the way they're being treated : Devine

Is Joe up for tough questions?: Devine

How does this work? On Friday the NYPD saves New York from God-knows-what by arresting an Ohio man allegedly toting an AK-47 and a bag of ammo inside the Times Square subway station.

On Saturday, the NYPD is the punching bag, yet again, for an anarchic bunch of privileged brats who think it’s their right to attack the police officers who keep this city safe.

With a jury verdict expected this week in the murder trial of former Minneapolis Officer Derek Chauvin, the white officer charged in the death of George Floyd, our city is bracing for even more violent riots from Antifa-BLM agitators.

It’s grim news that the NYPD has ordered officers not to take unscheduled days off until further notice.

“We have been planning for this for some time,” Police Commissioner Dermot Shea said last week. “We think we are prepared.”

If the city gets out unscathed, it would be no thanks to elected Democratic lawmakers, who are going out of their way to aid and abet the war on cops.

Exhibit A: California Congresswoman Maxine Waters, who should know better at the age of 82, flew 1,000 miles from Washington, DC, to Minnesota on Saturday night to cause trouble in an already-volatile space.

She urged protesters — who had attacked police the previous night and already were defying a curfew — to “stay on the street [because] we’re looking for a guilty verdict” in the Chauvin trial.

“And if we don’t [get it], we cannot go away. We’ve got to get more confrontational.”

Sure enough, within a few hours of Waters’ inflammatory remarks, two soldiers were injured when someone opened fire on the Minnesota National Guard and Minneapolis police in a drive-by shooting. Thankfully, their injuries were minor, according to Adjutant Maj. Gen. Shawn Manke.

“This event highlights the volatility and tension in our communities right now,” he said in a statement.

Waters couldn’t care less, appearing on MSNBC Sunday morning boasting that she saw herself “kind of as Aunty Maxine … Those of us who hold significant positions must stand up.”

This is staggeringly unseemly behavior from a member of Congress.

If one person is killed or injured in riots after the Chauvin verdict, then Waters ought to be held responsible for pouring gasoline on the fire.

If Georgia Republican Rep. Marjorie Taylor Greene can be removed from committees and threatened with expulsion from Congress over old Facebook posts, why do Democrats who encourage lawlessness in real time get a free pass?

Democratic rabble rousers know they are unleashing the mob from any restraints on their passions. It is deliberate.

Over the weekend, a house in California was sprayed with pig’s blood and adorned with a severed pig’s head by a protester who mistakenly thought it was the home of a retired cop who testified last week at the Chauvin trial.

The aim is to intimidate the jurors to force the verdict the protesters want, and who cares about justice.

Back in New York, Mayor de Blasio is warning police to go easy on protesters this week, even if they’re throwing Molotov cocktails and bricks at officers, as they did last summer. New York Attorney General Tish James launched a lawsuit against the NYPD over those protests, complaining that officers didn’t treat their attackers gently enough.

Violent activists and their political enablers seem to be under the impression that police exist to be their punching bags and, further, that they should wait to be shot before using lethal force.

Sorry, no. That’s not how it works, and it’s about time the thugs learned the lesson.

For instance, why did schoolteacher Mikael Bucknavage get to walk free without bail and no supervision after allegedly assaulting an NYPD sergeant during a “peaceful protest” on the Upper East Side last week? Store windows were smashed, cars vandalized, outdoor diners menaced and “Kill cops” graffiti was spray-painted everywhere during the melee.

“Kill cops, kill cops: this is why we have memorials for cops. Words matter,” an angry Commissioner Shea said at a press conference Thursday, and demanded jail time for accused rioters.

It won’t happen until New York has leaders of the caliber of Gov. Ron DeSantis in Florida, where new anti-riot laws were passed last week, setting clear boundaries for protesters.

You are free to protest peacefully, but the minute you use violence and attack police, all bets are off.

There is a six-month mandatory sentence for assaulting a cop during a riot, and accused rioters cannot be bailed out of jail until after their first court appearance.

We need the same here, or the violent anarchists who have been waging war on the police for the past two years will be emboldened to do worse.

That’s not what New Yorkers want. Most support their police, as can be seen most starkly in a Rasmussen poll last week. Most Americans think police in their area do a good job and are not racist. What’s more, poor people are more pro-police than rich people, by a factor of almost 2 to 1.

There’s no social justice in destroying a police force.

It might be frowned upon in media circles to state the bleeding obvious, but back in 2019, Hunter Biden and his sometime therapist, Keith Ablow, joked about Joe Biden’s “dementia” in text messages on two occasions a month apart.

The conversation, captured on a laptop Hunter abandoned at a Mac repair shop in Delaware in April of that year, begins Jan. 2 with an assessment of candidates in the Democratic presidential primary.

“Your dad is the answer,” says Ablow, before quoting himself: “ ‘Any man who can triumph over dementia is a giant. Think what he could do for our nation’s needed recovery,’ Dr. Keith Ablow.”

Hunter replies: “You’re such an a–hole but that made me laugh out loud.”

Ablow, still quoting himself: “ ‘Perhaps he can help us remember all we intended to be as a people since he can now remember his address.’ ”

Hunter replies, “He doesn’t need to [know] where he lives Keith that’s the only thing the Secret Service get right at least 75% of the time.”

Reached at his Massachusetts office, Ablow declined to comment, but once during a 2012 appearance on Fox News, he diagnosed then-Vice President Biden as having “early onset dementia,” so that background may underpin the banter.

In a separate text exchange on Feb. 6, 2019, about a podcast the pair were planning, Hunter texts: “Dad is our first guest.”

Ablow replies: “Perfect. Does he recall details tho, with the dementia and all.”

Hunter: “Not much these days but since it’s all fake news anyway I don’t see the problem.”

Boom boom. Tell us something we don’t know!

Fraudster stole £8,000 for 6 years in Turkey – pretending to live in Scunthorpe