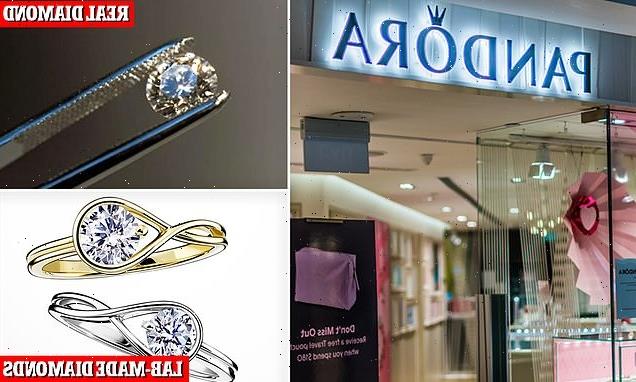 Lab-made diamonds are forever: World’s biggest jewelry brand Pandora will no longer sell mined diamonds and vows to ‘transform the market’ with ‘eco-friendly’ alternative at a THIRD of the price

The world’s biggest jewelry brand Pandora has said it will no longer sell mined diamonds as it vows to ‘transform the market’ with its ‘eco-friendly’ alternative that will sell for just a third of the price of the real deal.

The company, best known for its iconic charm bracelets, announced Tuesday it is switching to man-made diamonds only, which it will manufacture in labs in the UK.

Diamonds are mined in Canada, Africa and other parts of the world: Critics say issues with mining include soil erosion, loss of wildlife habitat and deforestation. The left-behind pits can also become hazards.

CEO Alexander Lacik said the move will make the gems ‘accessible’ to more people as well as further the company’s efforts to make its supply chain more sustainable, ethical and traceable.

‘They are as much a symbol of innovation and progress as they are of enduring beauty and stand as a testament to our ongoing and ambitious sustainability agenda,’ he said in a statement.

The company didn’t release a specific price list – only to say that the man-made diamonds will go for about a third of the price of natural ones.

A typical jewelers has one-karat diamonds at ‘VS2’ quality for around $3,600, while natural ones of the same quality cost around $5,300, according to The Diamond Pro, a site of jewelry experts. 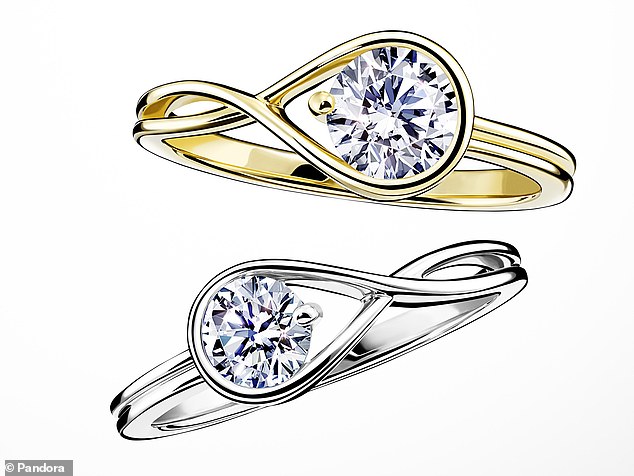 The world’s biggest jewelry brand Pandora has said it will no longer sell mined diamonds as it vows to ‘transform the market’ with its eco-friendly alternative that will sell for just a third of the price of the real deal. Pictured its new lab-made collection

Pandora’s new collection of man-made stones, named Pandora Brilliance, will hit the UK market May 6 before being rolled out worldwide next year.

It includes necklaces, earrings and rings, with prices starting from around $350.

Lacik told the BBC the jewelry can be made and retailed at much lower costs than mined diamonds.

‘We can essentially create the same outcome as nature has created, but at a very, very different price,’ he said, adding that they are made for as little as ‘a third of what it is for something that we’ve dug up from the ground.’

But the company said there is no compromise in the quality, with the lab-made jewels ‘physically, chemically, and optically identical to their mined counterparts but they are created above ground’.

They are produced to the same measures of quality and consistency known as the 4Cs (Colour, Clarity, Cut and Carat), it said.

Still, nearly 50 percent of consumers polled by deBeers, the biggest miner of diamonds in the world, said they didn’t think lab-made diamonds were ‘real.’ 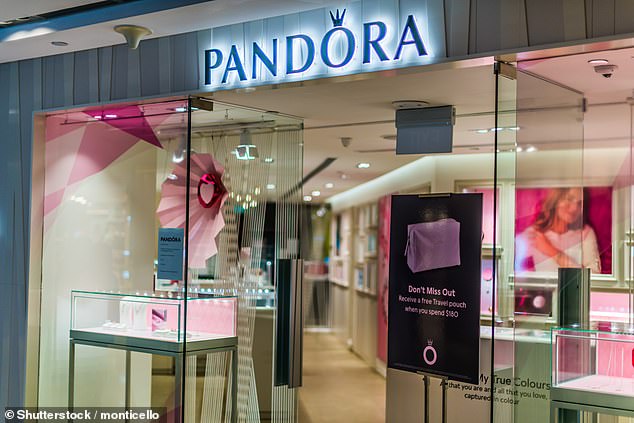 The company, best known for its iconic charm bracelets, announced Tuesday it is switching to man-made diamonds only, which it will manufacture in labs in the UK

Mining diamonds involves moving thousands of acres of earth, producing a lot of pollution into the atmosphere.  In total, air emissions on a single carat of mined diamond are 1.5 billion times higher than those of a lab-grown one, according to Ethica Diamonds

Natural diamonds retain around 50% of their initial value, whereas lab-made diamonds devalue rapidly

Lab diamonds are looked on less favorably, with most consumers calling them artificial and fake, according to Bain & Company

At Pandora, the collection, will feature pieces to be layered together, are more environmentally friendly than their mined counterparts because they are made with on average more than 60 percent renewable energy.

By the time the collection is launched globally in 2022, Pandora expects to have upped this to 100 percent renewable energy.

The company, which made 85 million pieces of jewelry and sold 50,000 diamonds in 2020, is working with carbon neutral experts at Natural Capital Partners to achieve carbon neutral certification for all its products, it said.

The diamonds are made in hot, pressurized chambers in labs over a matter of just weeks as opposed to the billions of years they take to form naturally in the ground.

The move comes one year after Pandora pledged to use only recycled gold and silver in its products and achieve carbon neutrality by 2025.

This marks the first time a big jewelry brand has turned its back on mined diamonds altogether.

However, lab-made diamonds have been growing in popularity in recent years as consumers become increasingly drawn to more environmentally friendly, lower cost options.

Last year, Tiffany & Co announced a new tracing initiative where customers can trace the sourcing of their diamonds all the way back to the mine.

This came after De Beers started offering lab-grown diamonds in 2018, marking a huge shift for the luxury brand that had long shunned man-made gems.

The jewelry industry has long been plagued by human rights abuses in its supply chains.

Conflict or blood diamonds are stones produced in areas controlled by rebel forces that are using to fund the buying of arms.

As well as its pioneering pledge for lab-made diamonds, Pandora also announced Tuesday a push for growth in the US and China, and potential expansion into new areas such as watches and bags, after posting forecast-beating first-quarter operating profit. 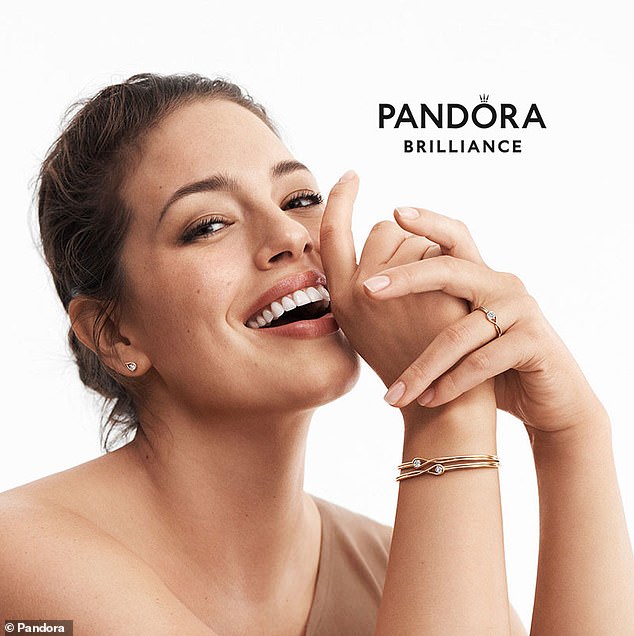 Pandora’s new collection of man-made stones, named Pandora Brilliance, will hit the UK market May 6 before being rolled out worldwide next year 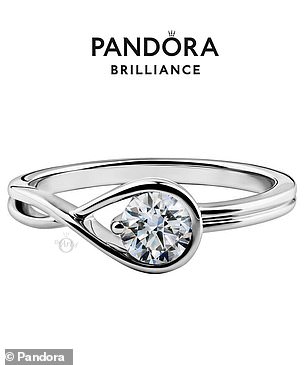 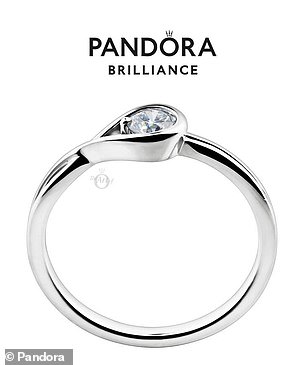 It includes necklaces, earrings and rings, with prices starting from around $350

Strong online sales and the impact of stimulus packages in the United States helped lift operating profit more than four-fold to 903 million crowns ($146.2 million) between January and March, versus 833 million crowns forecast in a company-compiled poll.

Lacik said the strategy aims to strengthen its brand in key markets, particularly the world’s two biggest economies, and over time to potentially extend into other product categories.

‘We see untapped opportunities in the United States and China, where our brand penetration is still very low,’ Lacik said.

‘We see good opportunities to grow [there], rather than expanding into new geographies.’ 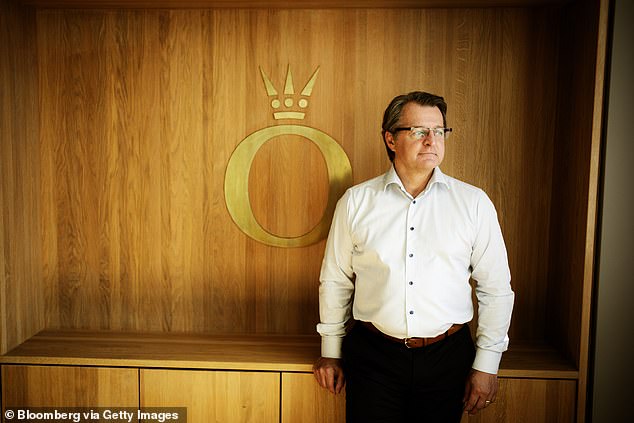 CEO Alexander Lacik (pictured) said of the move: ‘Diamonds are not only forever, but for everyone’ 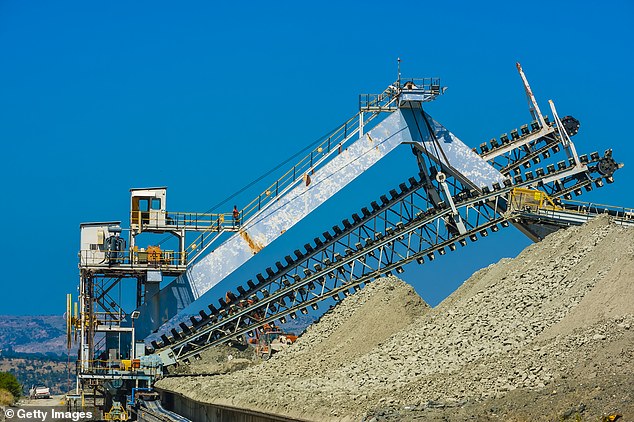 The Cullinan Diamond Mine near Pretoria, South Africa. This marks the first time a big jewelry brand has turned its back on mined diamonds altogether

The jewelry industry has long been plagued by human rights abuses in its supply chains.

Conflict or blood diamonds are stones produced in areas controlled by rebel forces that are using to fund the buying of arms and conflict.

While jewelry brands have been focusing on improving their sourcing of diamonds, a report from Human Rights Watch in November 2020 found that many can still not assure customers that the gems are unaffected by human rights abuses.

Miners work in dangerous conditions, child labor is rife and illegal mining and trading is on the rise.

Over the last year, the situation has grown worse due to the COVID-19 pandemic with many losing work and those in work forced to together in close conditions despite the risks of the virus, the report found.

‘For now we will stay firmly within the jewellery segment,’ he added, saying he sees potential for further growth in charms and bracelets, which account for some 70 percent of its business.

‘But in the longer term, we are looking at other avenues of growth.’

That could include expanding its accessories offering under the Pandora brand, or bringing in other brands, he said.

The company said 30 percent of its 2,700 stores worldwide were closed during the first three months of the year due to coronavirus-led lockdown measures.

‘We have had a good start to 2021, not least considering that many of our stores have been closed,’ Lacik said.

Around one in five stores are currently shut, but the company lifted its full-year sales and profit outlook on Monday on expectations of a faster reopening.

Pandora shares, which have risen three-fold over the past year, traded 5 percent higher at opening.

The group’s sales increased more than 10-fold in the decade to 2017 after it found a niche between the cheaper accessories available in stores such as H&M and the more expensive jewelry on offer from the likes of Tiffany & Co.

But it suffered a major setback as a lack of innovation and overstretching itself at the top and bottom of the market kept both shoppers and investors at bay.

Since joining Pandora in early 2019, Lacik has cut costs and pushed e-commerce.

The silent Democratic majority is finally crying out for moderation

British academics warned not to censor themselves to appease China