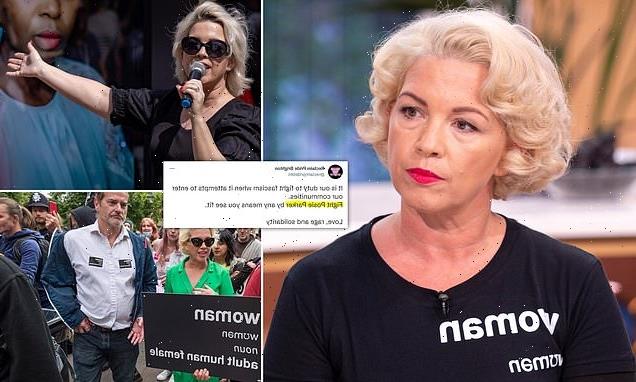 EXCLUSIVE: ‘I’ve been called a Nazi for saying women don’t have penises’: Women’s rights campaigner reveals pro-trans lobby have ‘wished CANCER on her children’ – as police investigate threats of violence against her ahead of ‘Let Women Speak’ event

A women’s rights campaigner says the pro-trans lobby has branded her a Nazi and made sick slurs about hoping her children develop cancer.

Kellie-Jay Keen, who founded Standing For Women, told MailOnline her events had been hit by a number of threats and warnings.

She spoke out after officers from Sussex Constabulary were alerted to a number of menacing messages against her.

They included many branding Ms Keen – who is also known as Posie Parker – a TERF and urging people to ‘Fight her by any means you see fit’.

It came ahead of a planned Let Women Speak event in Brighton on September 18, which is billed as a ‘Speakers’ Corner tour’.

Ms Keen – a mother-of-four – has frequently attracted the ire of pro-trans activists over her views on gender rights.

She told MailOnline: ‘I have been called a Nazi for saying I don’t think women have penises. Once you can portray someone as the most heinous person in society – a Nazi – I guess anything goes.

‘I have had a lot of threats over the years, I have been told about how they hope my children get cancer.

‘Sadly, it’s not unusual for trans activists to issue threats about women wanting to talk about our rights – JK Rowling is a prime example of that.

‘We are subjected to a wide range of menacing messages.

‘I think the whole social media thing depersonalises people as well. We have been dehumanised by the term TERF. There are some quite disturbed people within that group, like others I guess.

‘It’s a very effective campaign that we are supposed to believe that men that want to call themselves women are the most vulnerable group in society. 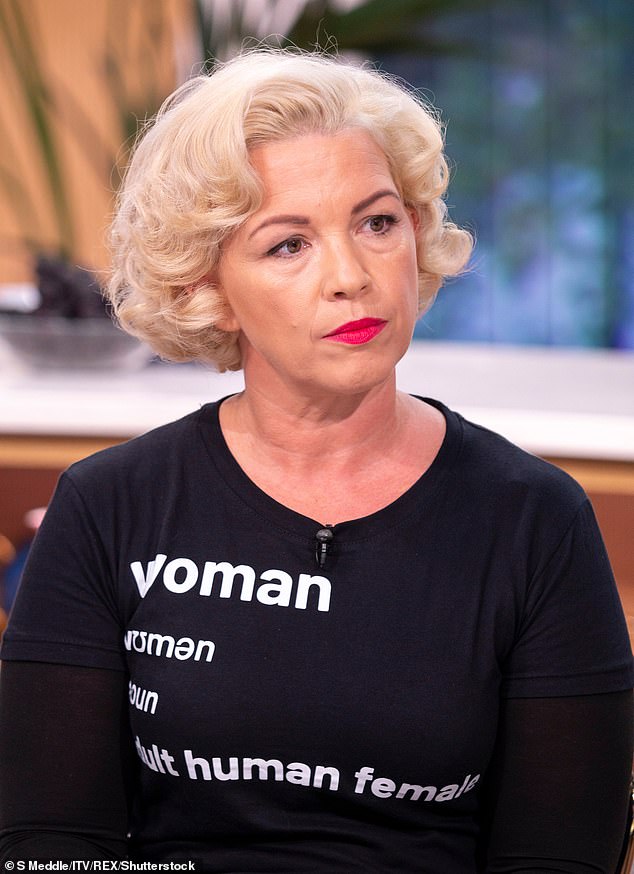 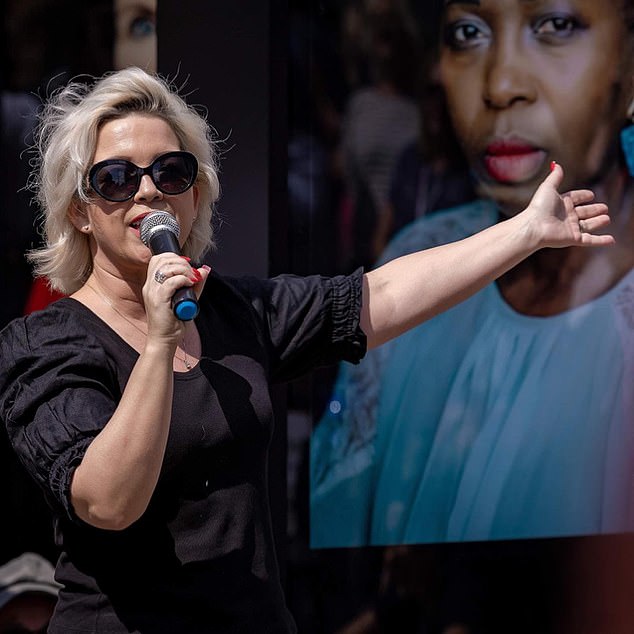 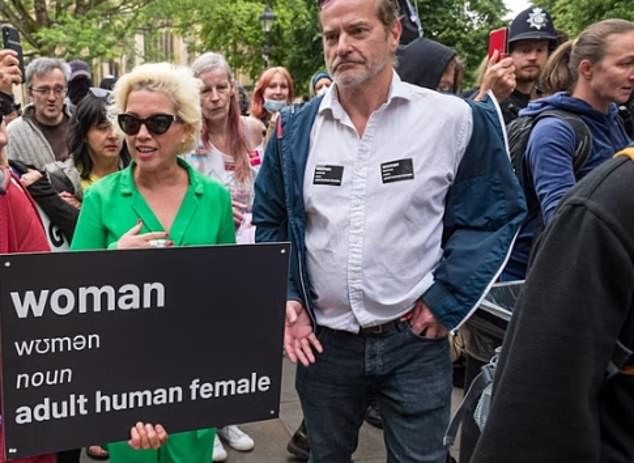 This publicity shot for the event in Brighton, which is due to take place on September 18

‘When I was a bit younger I could walk to Tesco with my children and some man would tell me what they thought of my appearance. We as women sadly have become used to these regular infringements. I think the whole identity politics issue is a poison.

‘The event will go ahead. We have sent Sussex Police information on how many people are expected to attend. They have been really good actually.’

This is the latest development in a continuing debate over biologically born women’s rights compared to those who have transitioned from a different gender.

In recent months the discussion has seen The Globe Theatre slated for making Joan of Arc non-binary and a feminist removed from a gay pride march in Cardiff.

Remarks against her upcoming event included one from the Reclaim Brighton Pride account.

It declared: ‘It is our duty to fight facism when it attempts to enter our communities.

‘Fight Posie Parker by any means you see fit. Love, rage and solidarity.’ 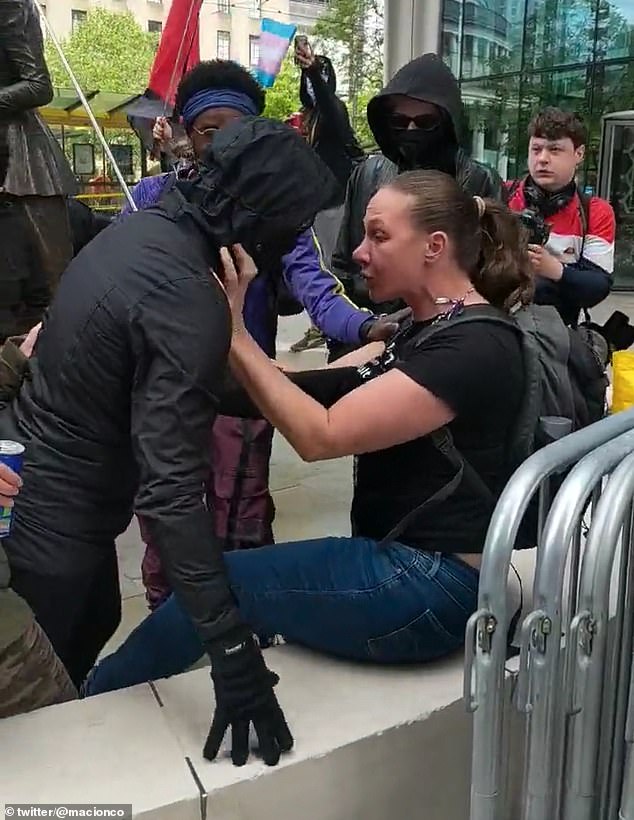 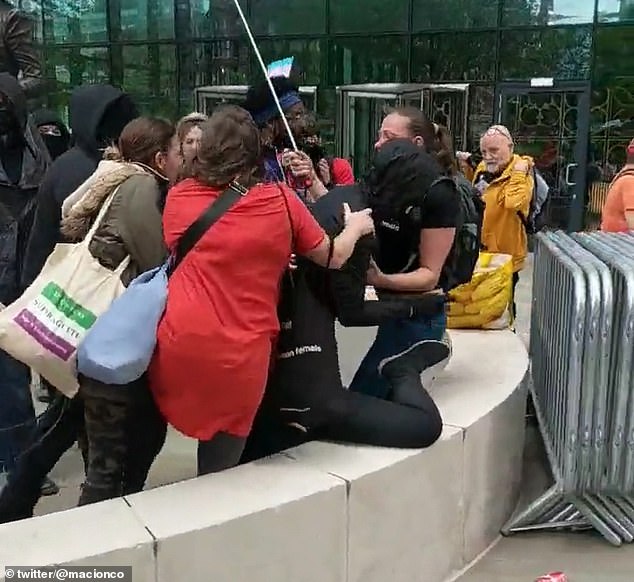 The two sets of activists tussled as they battled for position by the Emmeline Pankhurt statue on St Peter’s Square, Manchester, earlier this year

Ms Keen founded the SFW group which campaigns for sex based rights and protections of the word woman.

Earlier this year one of the movement’s supporters was ‘manhandled’ by a gang of masked trans activists.

She was assaulted during a counter-protest by the Manchester Trans Rise Up (MTRU) movement next to the city’s statue of Emmeline Pankhurst in St Peter’s Square in May.

The trans activists arrived to disrupt SFW’s speaking event in front of the statue as part of an event which said it aimed to reclaim ‘a part of Manchester for women’s voices’.

Ms Keen was visited by police in July after a complaint about her comments on transgender issues on YouTube. 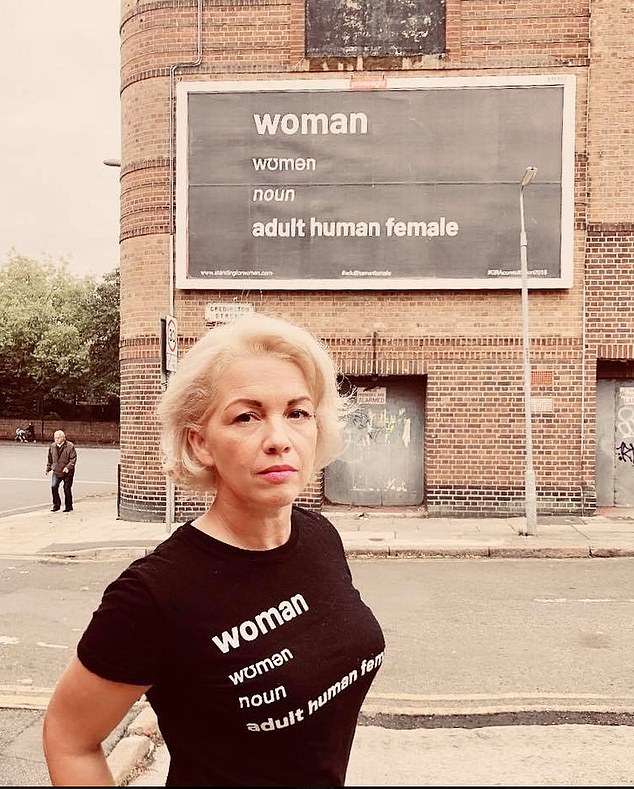 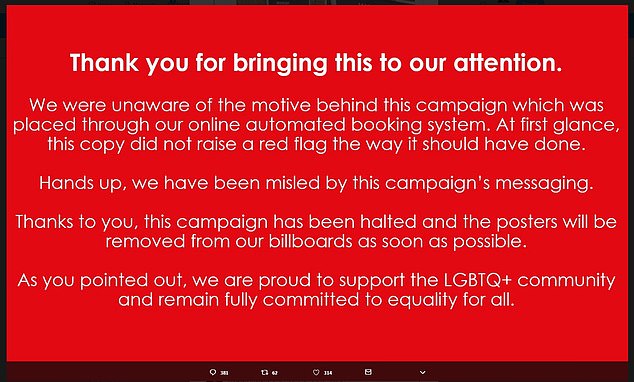 Hours after Dr Harrop’s complaint, Primesight confirmed the billboards would be taken down that evening

A clip had been played from transgender charity Mermaids, which showed a trans woman describing feeling like a ‘sex siren’.

Wiltshire police said at the time the officers had attended to offer ‘words of advice’.

And in 2018 a billboard with the definition of a woman written on it funded by Ms Keen was removed after a Twitter activist complained it was ‘transphobic.’

She raised £700 for the poster to be put up in Liverpool for a fortnight to coincide with the Labour Party conference.

The poster, on the side of the old Gaumont cinema on Gredington Street in Toxteth, Liverpool, bore the Google definition of a woman – ‘adult human female.’

But it was removed after Dr Adrian Harrop, 31, who is not transgender, complained to billboard company Primesight that it would serve to make transgender women feel unsafe.

Sussex Police said of the upcoming event: ‘Sussex Police is aware of an event being held at the Level on Saturday, September 18, as well as plans for protest.

‘Officers are in contact with the event organisers as well as demonstrators, and preparations are in place to ensure the safety of everybody involved and to minimise disruption to the wider community.’