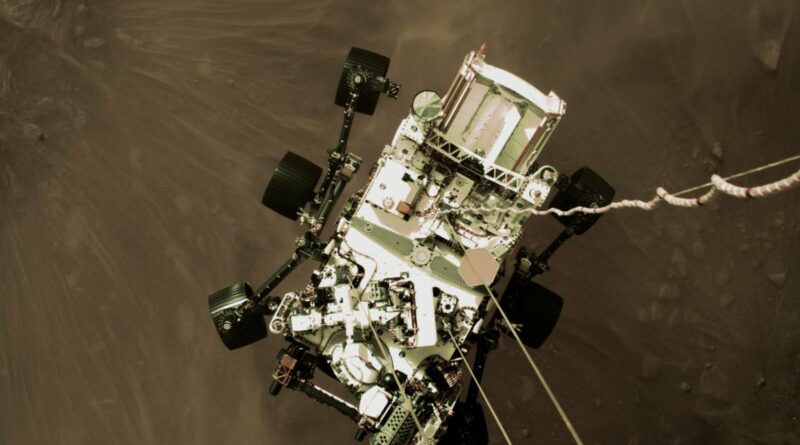 Nasa has released video of its Perseverance rover making its descent and landing on Mars.

A microphone on the rover has also captured the first audio from the Red Planet.

The video shows the whole descent from the moment the parachute inflated to its landing in the Jezero Crater.

The microphone, a commercial off-the-shelf device, survived the descent and captured audio from theJezero Crater.

A Martian breeze is audible for a few seconds, as are mechanical sounds of the rover operating on the surface.

“For those who wonder how you land on Mars – or why it is so difficult – or how cool it would be to do so – you need look no further,” said acting Nasa administrator Steve Jurczyk.

“Perseverance is just getting started, and already has provided some of the most iconic visuals in space exploration history. It reinforces the remarkable level of engineering and precision that is required to build and fly a vehicle to the Red Planet.”

The world got its first close-up look at a Mars landing last week, as Nasa released a stunning picture of its newest rover being lowered onto the dusty red surface.

The photo was released less than 24 hours after the Perseverance rover successfully touched down near an ancient river delta, where it will search for signs of ancient life and set aside the most promising rock samples for return to Earth in a decade.

Nasa equipped the spacecraft with a record 25 cameras and two microphones, many of which were turned on during Thursday’s descent.

The rover is shown in extraordinary detail just two metres off the ground, being lowered by cables attached to an overhead sky crane, the red dust kicked up by rocket engines. Nasa’s Jet Propulsion Laboratory in Pasadena, California, promises more photos in the next few days and possibly also an audio recording of the descent.

“This is something that we’ve never seen before,” flight system engineer Aaron Stehura noted at a news conference. “It was stunning, and the team was awestruck. There’s just a feeling of victory that we were able to capture these and share it with the world.”

Chief engineer Adam Steltzner called the picture “iconic”, putting it right up there with photos of Apollo 11’s Buzz Aldrin on the moon, Saturn as seen by Voyager 1, and the Hubble Space Telescope’s “pillars of creation” shot.