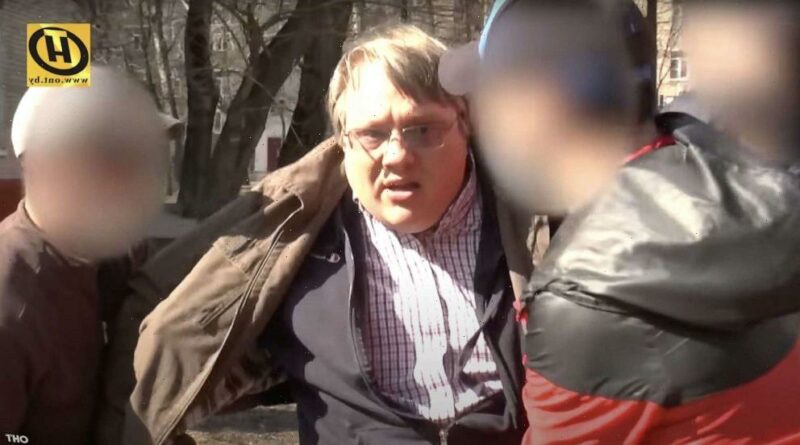 Alena Denisavets said she had been looking for her husband for more than a day when she got a text message from a lawyer who she believed was working for Belarus’ feared security services, still known today as the KGB.

Her husband Youras Ziankovich had vanished while on a trip to Moscow in April. She said she learned from the hotel where he was staying that unknown men had taken him. Now, she was hearing from the place she had never wanted him to be.

“I kind of tried to calm down and to understand what happened; why he’s in Minsk, [Belarus], why this person is contacting me from the KGB; [and] who is this person,” Denisavets told ABC News from Texas last week. “I was shocked, I was shaking, I was crying.”

Belarus’ KGB later announced it had taken Ziankovich. The men who took him filmed the abduction and it was later aired on Belarusian state television. As Ziankovich approached his hotel in Moscow, three men grabbed him and forced him into a van.

Ziankovich is a lawyer with U.S. citizenship and a long-time opponent of Alexander Lukashenko, the authoritarian leader of his native Belarus. For more than a decade, Ziankovich had lived in the United States, where he gained political asylum and then citizenship, and ran a law practice from Texas.

After he was seized in Moscow, he was driven nearly 700 miles across the border to Belarus and placed in a KGB jail in Minsk, according to Belarusian authorities. His wife has not been able to speak with him since, nor have the United States consular staff, despite requests to do so.

Zianokovich was grabbed that day in Moscow along with another Belarusian opponent of Lukashenko, Alexander Feduta, shortly after the two had eaten lunch together. Feduta, who more than a decade ago served as spokesman for Lukashenko, is a literary critic and now a vocal critic of his former boss.

About a week after the men were taken, Lukashenko announced to journalists that Belarusian security forces had thwarted a supposed coup attempt against him and accused Ziankovich and Feduta of planning it.

Belarus’ KGB claimed the two men were part of a U.S.-backed plot to assassinate the Belarusian authoritarian leader and abduct his children.

“We have seized them in Moscow,” Lukashenko told reporters. “They flew from the U.S. His last name is Ziankovich.”

The U.S. State Department responded quickly to Lukashenko’s claim, saying that “any suggestion that the U.S. government was behind or involved in an assassination attempt on Lukashenko is absolutely untrue.”

Denisavets said the coup claims against her husband were ridiculous, invented by the Lukashenko regime to create a justification for repression in the country, where he is currently straining to crush a protest movement that broke out against him last year.

“They need a story, kind of a very loud story,” Denisavets said. “Everyone is a terrorist, a potential terrorist, if he is against the government.”

She accused Belarus and Russia of collaborating to kidnap her husband.

Belarusian state television aired a lengthy report on the supposed coup attempt several days after he was taken. It included hidden camera footage showing Ziankovich and Feduta meeting in a Belarusian-themed restaurant in central Moscow with some unknown men.

The surveillance footage had been released by Russia’s Federal Security Service or FSB, its powerful domestic intelligence agency.

The FSB later said Ziankovich’s seizure had been a joint operation with the KGB. And president Vladimir Putin has since supported Lukashenko’s claim of the coup plot, criticising the West in his annual state of the nation address for not condemning it.

Most outside experts have expressed scepticism about the coup allegations, noting the improbable way in which it was supposedly planned and that those involved have no connections with the military or significant influence.

To back up the claims about the coup, Belarusian state television aired video from a Zoom call, where it alleged Ziankovich and the others were discussing their plans.

But Alexander Perepechko, a political analyst who participated in the Zoom call, said that claim was preposterous and that in reality the call had just been an academic discussion.

“This is the first time in my life that I’ve seen people like us playing quote-un-quote ‘coup d’etat’ using Zoom,” Perepechko, who lives in exile in the U.S., told ABC News. “There was no secrecy, there was no conspiracy. It was an academic conversation.”

Perepechko said the call had been a “war gaming” exercise where the participants had discussed different possibilities for how Belarus’ political crisis might end. Although he and others present were passionate to see the end of Lukashenko’s rule, he said, they had no means or experience for organizing a coup.

“We just became part of a big game,” he said. “And we were just kind of unlucky those people … are in KGB prison in Minsk now because we talked about a sensitive topic.”

Hanna Liubakova, a journalist and Atlantic Council non-resident fellow, said she did not believe the coup allegations were real.

“I don’t really think a coup d’etat might be planned by Zoom,” she said. “I think that’s another kind of fairy tale, another story that the regime tries to show.”

Liubakova said she believed it was possible that Ziankovich and Feduata might have been tricked into going to Moscow on false promises about possible assistance against Lukashenko, but that the idea they might have orchestrated a real coup was not credible.

“It’s all being kind of presented in this way because Lukashenko needs to justify repressions,” she said.

The mass protests that broke out following the contested election in August 2020 came close to toppling Lukashenko at the time. But he has since gradually strangled the protest movement through continuous repression, and in recent months, has gone on the offensive.

This week the regime moved to close down several popular independent media organizations. At the same time, it has aggressively targeted its opponents in exile. In May, Belarus forced down a Ryanair passenger flight with another opposition blogger onboard, Roman Protasevich.

Since then, Protasevich has repeatedly been paraded in front of journalists and publicly recanted his former opposition to Lukashenko under what his family and other opposition figueres say is intense pressure and likely torture.

Ziankovich and Feduata have both been shown appearing to admit guilt in videos aired on state television.

“When you are taken as a prisoner, you say whatever they want you to say to save your life and not to make things worse,” said Perepechko.

The democratic opposition estimates there are at least 500 political prisoners currently in Belarus and thousands have been detained since last August.

It is unclear when Ziankovich might be placed on trial. Aside from the denial of any conspiracy to assassinate the Belarus leader, the U.S. State Department has issued only curt statements on his detention, saying it is aware of it and trying to assist him.

Denisavets says she has written about her husband’s case to President Joe Biden, Vice President Kamala Harris, as well as her local senator and Congressional representatives. But she said that so far she had only received one response from the office of Sen. Ted Cruz.

Denisavets said she had to keep hoping that he would be freed. She believes the current situation in Belarus cannot last.

“I just want to say to him if he sees me, that I love him. … I wait for him here and I will do whatever is possible to release him, to help him,” she said, holding back tears. “It’s an occupation of the country and it will not last such a long time. The regime will not stay on the blood of people. It will end, and very soon.”