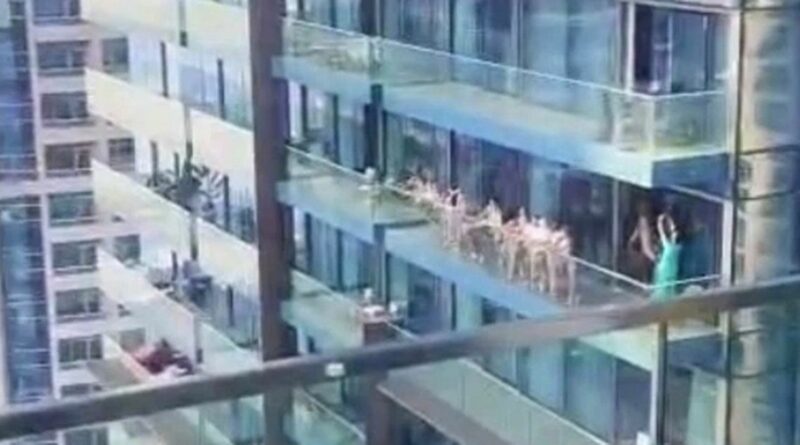 A group of women who were filmed posing naked on a penthouse balcony in Dubai have all been arrested.

Video footage of the group was widely shared on social media this week after they were captured by someone in an adjacent building in the city's upscale Marina neighbourhood.

State-linked newspaper The National reported the group had been taking part in a publicity stunt, without elaborating.

But police have said the group's behaviour was "unacceptable" and "does not reflect the values and ethics of Emirati society".

Those detained face up to six months in prison and a fine of around £1,000 for violating public decency laws in the United Arab Emirates, which includes nudity and other lewd behaviour.

Do you know who the women are? Contact us at [email protected]

Anyone who has shared the footage online could also be in trouble with the law, as sharing pornographic material is also punishable by law within the country.

It came as a shock in the federation of seven Arab sheikhdoms, where tamer behaviour, like kissing in public or drinking alcohol without a licence, has landed people in jail.

In a statement, Dubai Police said: "A criminal case has been registered against the arrested and they have been referred to the Public Prosecution for further legal action.

"Dubai Police warns against such unacceptable behaviours which do not reflect the values and ethics of the Emirati society."

The UAE, while liberal in many regards compared to its Middle Eastern neighbours, has strict laws governing expression.

People have been jailed for their comments and videos online.

In February a British woman was arrested in Dubai after swearing at her flatmate over WhatsApp.

This "absurd" incident means she could be trapped overseas for months and may even have to serve jail time — but when she pleaded with her housemate she said she "doesn't seem to care".

The unidentified HR manager has been living in the United Arab Emirates city since 2018, and with her visa about to expire, she'd already shipped her belongings back to England.

But when she arrived at the airport for the journey home she was informed by authorities that she couldn't leave due to an active police case against her.

Several months prior she'd had a heated discussion with her housemate over the private messenger WhatsApp concerning the use of the dining table while working from home.

At some point in the conversation, the woman typed out a single swear word, which technically violates the UAE's notoriously harsh cybercrime laws.

Avalanche break out in third to topple Edmonton Oilers