Home » Latest on the worldwide spread of the coronavirus 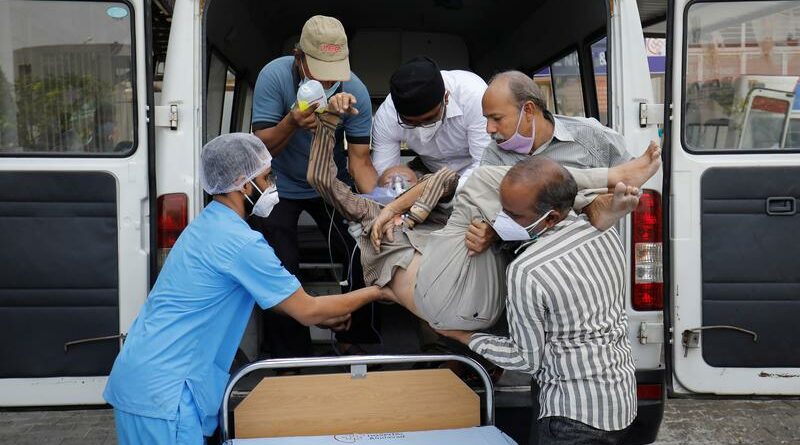 (Reuters) – India’s toll surged past 200,000 deaths and it reported a record daily surge in cases, while facing shortages of oxygen, medical supplies and hospital staff.

Healthcare workers and relatives carry Shashikantbhai Parekh, a patient with breathing problem, out from an ambulance for treatment at a COVID-19 hospital, amidst the spread of the coronavirus disease (COVID-19) in Ahmedabad, India, April 28, 2021. REUTERS/Amit Dave

* The European Commission’s lawsuit against drugmaker AstraZeneca over vaccine supplies began at a Brussels court, where the bloc’s lawyers pressed for immediate deliveries from all factories. The parties agreed to hold two more hearings on May 26.

* European Union countries introducing their own vaccination certificates would be left with a dangerous myriad of disjointed solutions if the 27-nation bloc fails to build a joint system, a senior official said.

* In Poland, children from the first three grades are expected to go back to school next week and people should not have to wear masks outdoors from May 15 if they keep a safe distance from others, the health minister said. Shopping centres will also reopen on May 4, while hotels will be allowed to open and restaurants will be able to serve food outdoors from May 8, the prime minister said.

* Vaccines deployed in England can cut transmission of the coronavirus in households by up to half, data from Public Health England showed.

* Britain is working on using the existing National Health Service coronavirus app to show that people have received their vaccine for international travel, the transport secretary said.

* Pakistan recorded more than 200 deaths in a day for the first time since the start of the pandemic.

* South Korea said it will offer some exemptions to mandatory quarantine measures for people who have been fully inoculated against COVID-19.

* The Biden administration on Tuesday said it was easing restrictions on Chinese and other students travelling to the United States this fall.

* A Senate inquiry into the Brazilian government’s handling of the pandemic kicked off on Tuesday, with lawmakers launching what may be a major headache for the president ahead of next year’s election.

* Experts say medical waste firms risk becoming overwhelmed by the sheer volume of debris and environmentalists are demanding more sustainable solutions as the vaccine rollout accelerates and millions of syringes, needles and tiny vials are thrown away.

* German biotech startup BioNTech is seeking details of reports from Israel of cases of heart inflammation among people receiving the COVID-19 vaccine it is making with Pfizer. It also expects the shot will win approval from the Chinese health authorities “by June at the latest”, its chief executive said.

* The U.S. Centers for Disease Control and Prevention has not found a link between heart inflammation and COVID-19 vaccines, the agency’s director said on Tuesday.

* World shares cosied up close to record highs and the dollar and global bond yields nudged up, as traders waited to see if the U.S. Federal Reserve utters the dreaded ‘T’ word later – tapering of its mass stimulus programme.

* Paraguay’s central bank has cut its annual economic growth forecast to 3.5% from 4%, amid a surge in cases and a stalled vaccine rollout.

Humana to buy rest of Kindred at Home for $5.7 billion to expand patient care