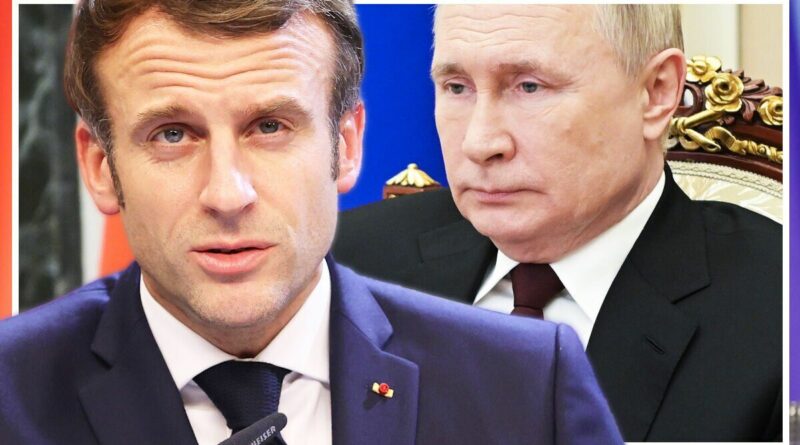 Mr Macron on Monday urged his government to acknowledge Europe’s new geopolitical situation. He said France had “entered into a war economy in which I believe we will find ourselves for a long time” and stressed the need for “a much larger defence industry” to avoid relying on foreign suppliers for military equipment.

The French President said he had asked the defence ministry and armed forces chiefs of staff to adjust a six-year framework defence spending plan running to 2025 to “match the means to the threats”.

Russia’s war, he argued, had created “an additional need to move faster and become stronger at a lower cost”.

He said: “Let’s not repeat the errors of the past going forward.

“Spending large sums on purchases from elsewhere is not a good idea.”

According to Le Monde newspaper, the government’s armament agency DGA is considering a draft law that would allow the order of civilian equipment or civilian factories to make arms.

Even before the conflict in Ukraine, French military spending had gradually increased since Mr Macron entered office in 2017.

The leader, whose conversations with Kyiv and Moscow have stood out above anyone else’s throughout the invasion, said “anybody doubting the urgency of these efforts only needs to look to Ukraine, where soldiers are asking for quality weaponry and they are entitled to a response from us”.

His comments came only a day after the first round of the fiercely contested parliamentary election took place on Sunday.

Although Mr Macron won with 58.54 percent of the votes in April, the législatives are decisive in either granting or depriving the French President of a National Assembly majority, which he needs in order to have a free hand for his proposals to cut taxes and make changes to the welfare system.

DON’T MISS
What next for Boris? Look back at Theresa May’s last months [ANALYSIS]
What is in Boris’s bill to overrule NI protocol [EXPLAINER]
Brexit-bashing Beaune on verge of sparking crisis for Macron [INSIGHT]

According to results published by the interior ministry on Monday, his Ensemble (Together) party took 25.75 percent of the vote, while a historic alliance of parties on the left — led by Jean-Luc Mélenchon’s France Unbowed and including the Socialists and the Greens — took 25.66 percent.

Mr Mélenchon’s alliance, known as the Nupes or the New Popular Ecological and Social Union, is aiming to increase its seats and reduce the number of Macron’s centrists.

Shortly after the first projections emerged, the far-left runner-up urged voters to go to the polls next Sunday to “reject definitively the disastrous policies of Mr Macron’s majority”.

Mr Macron and ministers have stepped up their campaigning efforts this week, warning Mr Mélenchon was dangerous and an extremist who would threaten the EU, “ally with Russia” and contribute to “world disorder”.

New prime minister Élisabeth Borne, who is running for the first time in a Normandy seat, said: “We have a week ahead of us to mobilise … One week to convince, one week to obtain a powerful and clear majority.”

Ensemble, she added, was “the only political grouping capable of getting a majority”.

The législatives‘ second round, on June 19, will set the balance of power for Mr Macron’s second term in France’s top job and determine how much of a say he’ll have on both the domestic and international fronts.

Swing-gate: Maria Bailey facing growing calls from within Fine Gael not to run in next general election

Trump Funnels Record Subsidies to Farmers Ahead of Election Day