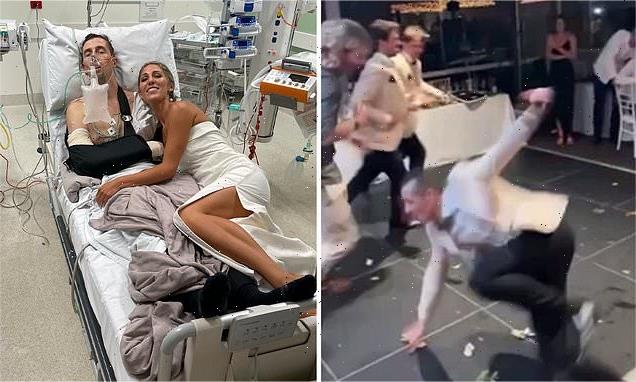 A red-faced groom spent his wedding night in hospital after dislocating his shoulder in an awkward fall on the dancefloor.

Adam Quinn decided to surprise his bride Helen in front of friends and family with a bizarre song choice at their reception in Manly on Sydney’s northern beaches on March 6.

The couple’s big day had be rescheduled four times due to Covid-19.

But things didn’t exactly go to plan on the night.

Moments later, Mr Quinn is jumping around with mates on the dancefloor covered in spilled beer and champagne.

He awkwardly slips, landing heavily on his hand and hyper-extending his elbow, sparking a mixed reaction of horror and amusement from guests. 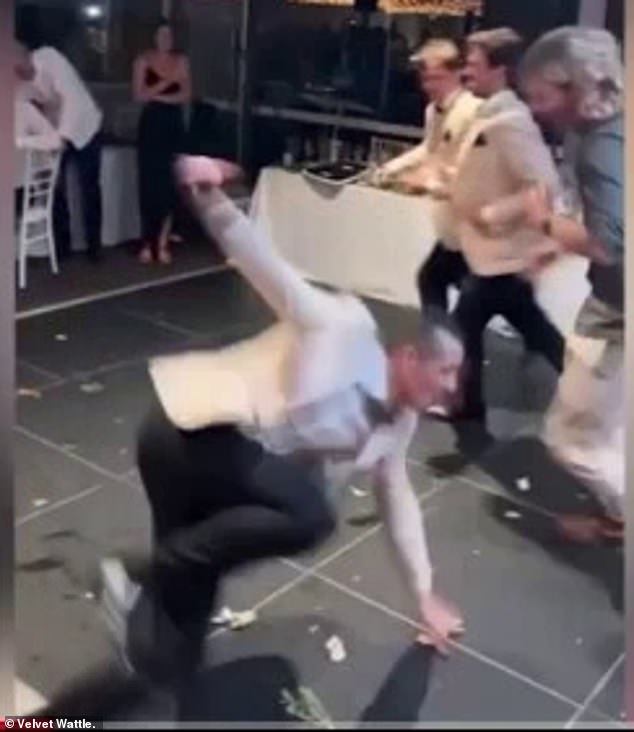 ‘I was singing a classic love song, I thought it was really romantic,’ the sheepish groom explains in the video afterwards.

‘But then I took a spill on a Corona! I think I’ve dislocated my elbow.’

The footage also shows the paramedics turning up and Mr Quinn using a morphine-laced green whistle for the excruciating pain.

‘How good is getting married?’ one is heard joking.

The video Mr Quinn being stretched from the venue accompanied by his new wife still in her bride gown to be rushed to hospital by ambulance.

As guests partied long into the night, Mr Quinn had be knocked unconscious for doctors to ‘pop’ his elbow back to place. 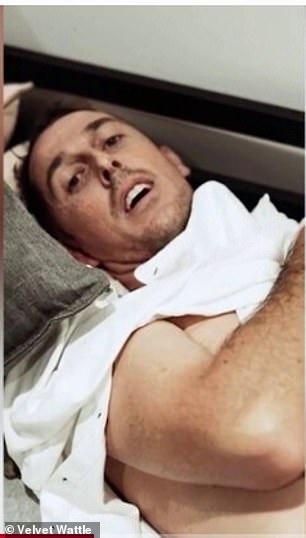 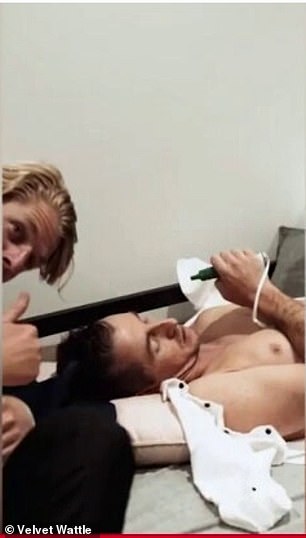 He spent the rest of night in hospital sleeping off the pain from his horror fall.

Videographer Mr Healy told Daily Mail Australia it was one of the most memorable wedding moments he’s witnessed. 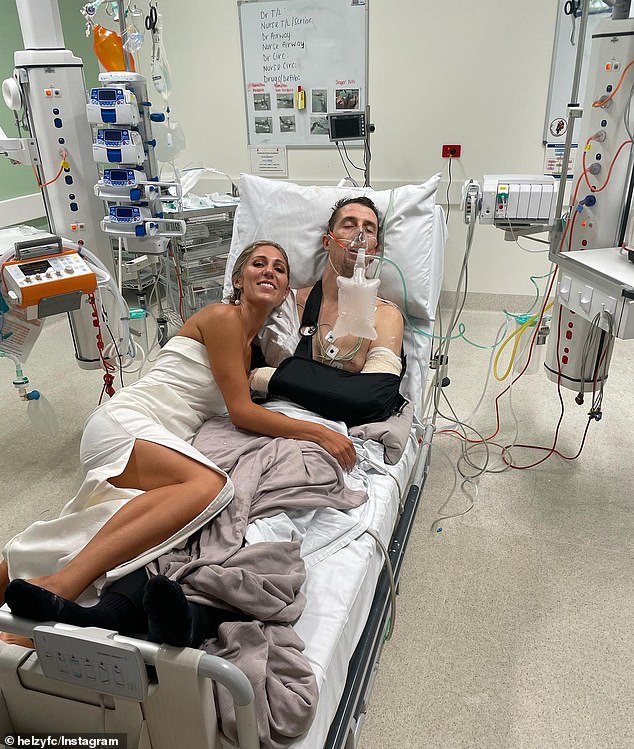 The Quinns have been together for six years and have a 17-month-old son.

Ms Quinn didn’t see actually see her groom’s nasty fall, having fled to the back to the room moments earlier.

‘He came out to me and he was as white as a ghost,’ she told 7news.com.au.

‘He told me that he thought he had broken his arm. It turned out he had dislocated his elbow.

‘We basically just snuck out the back door of the reception.’

Six month on, Mr Quinn has since made a full recovery.

‘It’s pretty embarrassing and I get a little triggered looking at the photos and watching the video,’ his wife laughed. 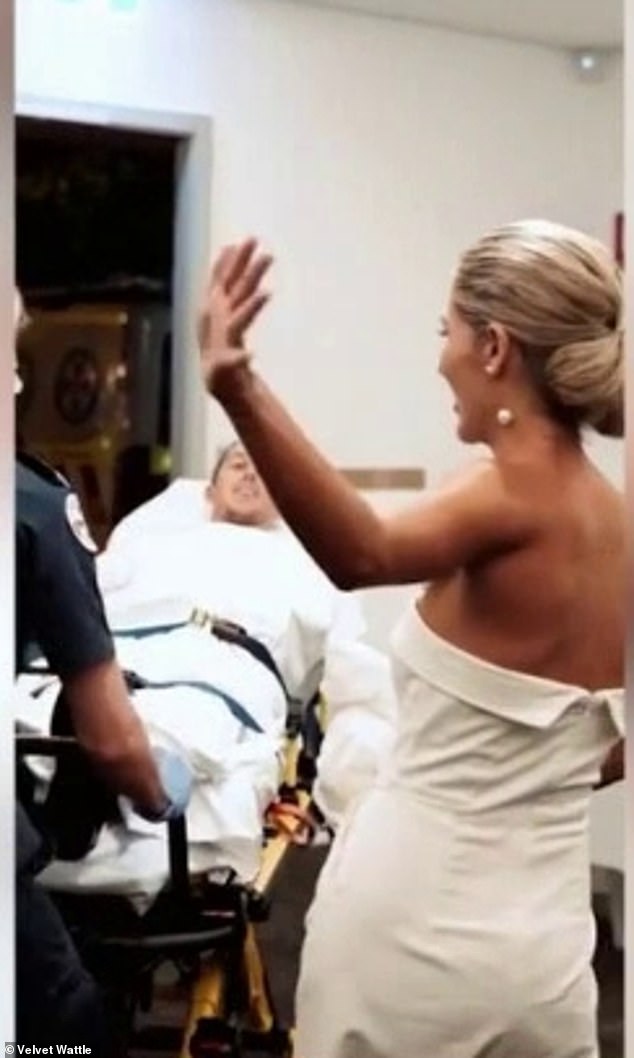 As their guests danced the night away, the newlyweds left their reception to head to the hospital in the back of an ambulance 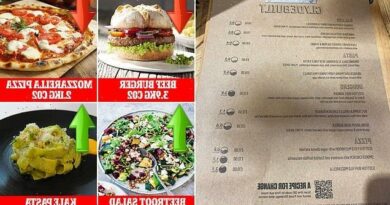 COP26 menu 'like serving cigarettes at a cancer conference' 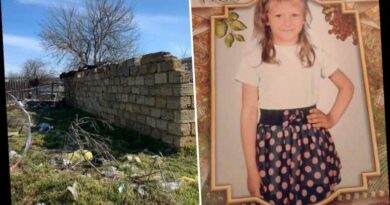 Girl, 7, raped and strangled to death after being snatched as she played in her garden just yards from her parents 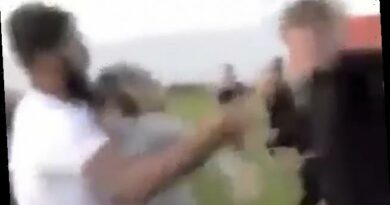