A group of Miami fans used an American flag to save the life of a cat dangling from the upper deck at Hard Rock Stadium on Saturday night.

A stray cat somehow made its way to the top level at the stadium during No. 22 Miami’s 25-23 win over Appalachian State, but then slipped over the edge and was hanging on by just its paws.

Dozens of feet below, as people sitting in the end zone sections grew more and more concerned, several fans stretched out an American flag in an attempt to catch the cat.

The cat landed right in the flag and was immediately scooped up, unharmed.

Well this may be the craziest thing I’ve seen at a college football game #HardRockCatpic.twitter.com/qfQgma23Xm

An alternate view of the incident showed the cat struggling to hold on to the banner on the upper deck of the stadium, though just out of reach of the fans in the front row.

How the cat got into the stadium and into that specific scenario isn’t clear — and may be impossible to actually figure out.

The fact that the fans were able to make the catch and keep the cat alive, however, should go down as the save of the season. 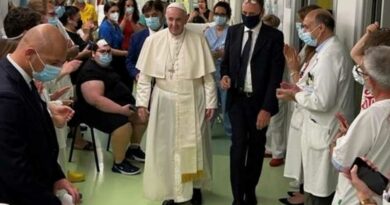